All kinds of Awesome

On Friday I had a full day out.  Haircut, half price sale at my favourite thrift store, foodbank (we have more eggs than customers), recycling depot, grocery store, health food store, produce store.  Kind of one of those days that you think, well I'm already out, so I might as well just get it all done.  I did... almost. (Turns out that I left a bag at the thrift store that I had put at the side of the checkout counter while I took my bigger purchases to the back, to be picked up on my way home.  I had to go back on Saturday to get the bag)

And when I finally got home, this is what I saw at the bottom of the driveway.
Totally Awesome!!! 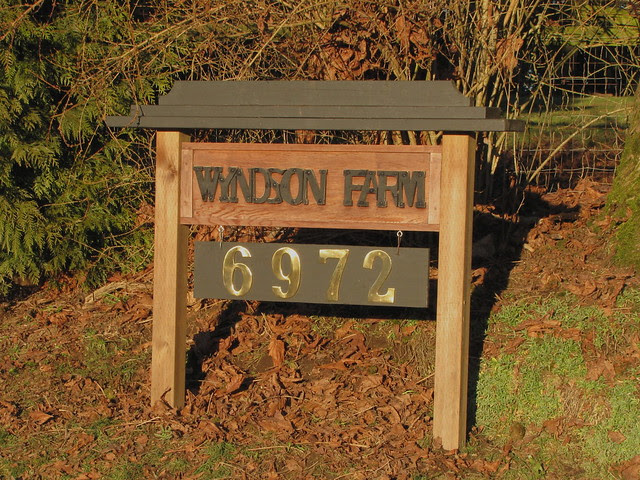 The sign itself wasn't a surprise to me.  Five years ago (I couldn't believe it was that long ago, but I have pictures to prove it)  David made the 'Wyndson Farm' part of the sign for me for Christmas.  There was discussion about how to use it, where to put it, and we decided to make a sign for the bottom of the driveway.  We had been given the large brass numbers by Larry's mum, and hadn't done anything with those, so they were perfect.  I designed the sign, Larry put it all together, and that was when the enthusiasm waned.  The logical place to put it was at the end of the driveway, and there was only one suitable spot where it could be easily seen.  We started to dig holes, but because there is a massive Broadleaf Maple right there, we instantly ran into a mass of roots, and decided to leave it to another day, and another, and another.  I mentioned a few times that what I would like for my birthday or Mother's Day was for that sign to be planted.  Didn't happen, the sign leaned against the front of the house for years, where the only ones that could see it was us.  And you know how that goes, if it's there long enough, even we didn't really see it any more.  Although Larry said he did, and he planted it on Friday.  He put an old chain on the chainsaw, stuck it down the hole, and cut some roots away.  He manhandled it into the hole and attached some braces to it, and yesterday we went out there and packed rocks and dirt back into the holes.  It's down a couple of feet, so good and solid. Awesome!

And continuing with the awesomeness.....I scored at the thrift store.  I was in the furniture and hardware store, and found three boxes of these. 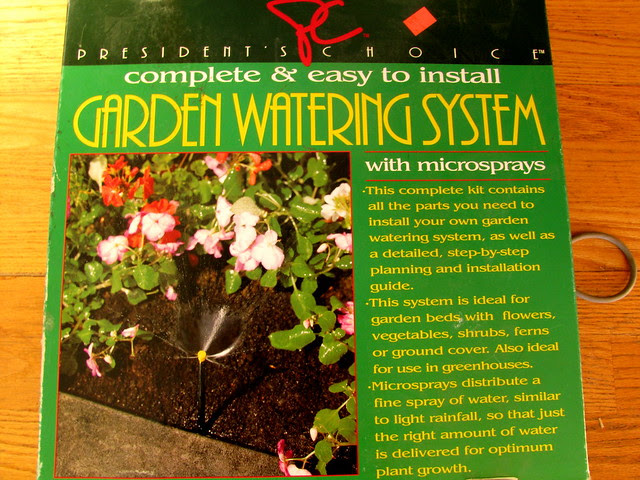 There is a little bit of this type of irrigation at the front of the house at Oliver.  We had talked about adding some more so that the lawn and flower beds and the front and side of the house were all covered.  The boxes cost me $4 each.  All the stuff inside, except for the piping, was in a sealed bag.  See those two yellow parts at the top.  They are the little sprayer heads that you have to snap apart, and they go in the top of the little skinny pipes like in the photo above. 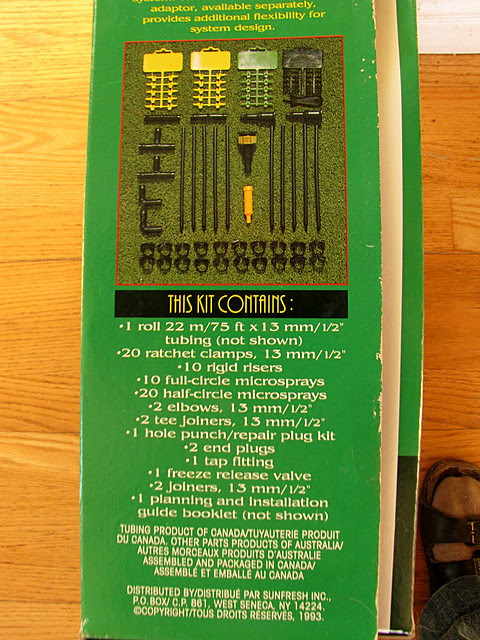 The local hardware store in Oliver carries all the parts for irrigation systems.  I had to buy a few replacement tops for what is already there.  They cost 25 cents each.  So that's $7.50 worth of sprayer heads in that $4 box, never mind the cost of the other parts. Love that the parts are made in Canada and Australia.
I also got a bigger box for $7.50, that has bigger piping and four pop-up sprayer heads for putting in your lawn.  For $20 we have enough irrigation parts for the whole place. Awesome!

And the not so awesome...
Since I was gone all day, Larry went to his favourite fast food joint, 6 minutes away, where he can get a coffee and muffin for about $1.50 and can read the sports section in the Province newspaper.  While he was gone, either Jake or Luna, had an accident, and left stinky deposits across the rug in the family room.  Larry said as soon as he came in the front door he could smell it.  It took him a while to track it down.  I think it was Luna because Jake doesn't really go in the family room, and I think it came from the front end, not the back.  Luna has been disappearing on our bush walks, sometimes coming back licking her lips, so she probably found something disgusting out there somewhere.
The rug was dragged outside, hung over the gate, scrapped off, sprayed down, and is still out there.  We need to rent a carpet cleaner, as we have a few rugs rolled up that need to be cleaned and then could be donated. 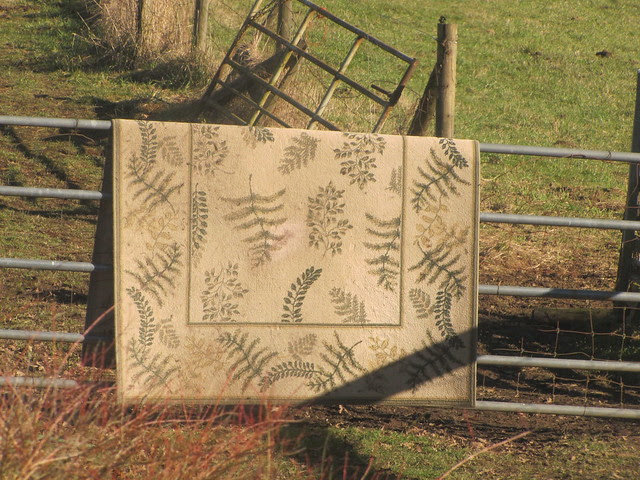 And to end on an awesome note...Our favourite blond dog turns 14 today.
I'm sure if she could speak, she say 'surely you have a better photo than that?' 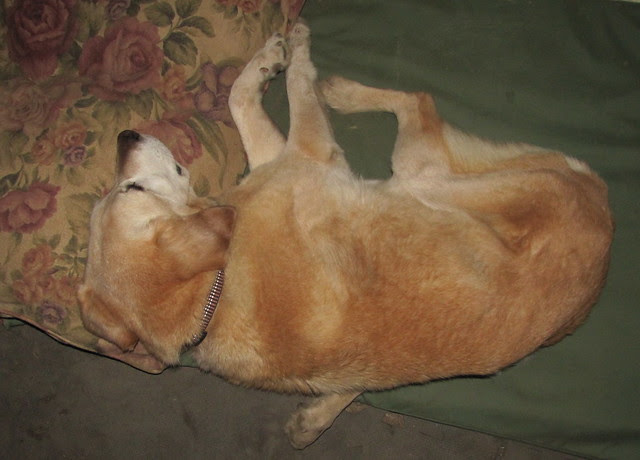 She loves to have a pillow, and sometimes looks like she has a foot growing out of her back.
(That's because she isn't conscious of where her back legs are or what they are doing)
Happy Birthday Calli!
Posted by Karen at 12:34 PM