My original idea was to paint the union jack on the wood first, and then put stain over the whole thing to sort of mute the flag down a bit.  Forgot all about that, as I was excited I'd actually found some walnut stain, and merrily went on my way and stained the top.  Oh well.  I wanted to have part of the stained wood top showing, so decided to just paint the stripes, and the stained wood would be the blue part of the flag.

As you may have noticed in the previous post, there are very specific measurements to drawing the Union Jack correctly, and I wanted it to be like the real thing.  The lid was 18" wide, but 54" long.  I based my measurements on that 18" width, and just extended the horizontal and diagonal stripes until they ran over the edge of the top.  I thought I had found an easier way to do all the taping compared to some pictures I had seen.  First I would tape all the outer edges of the white, and I started to fill them in.  Then I thought, why paint it all in, just paint the part that needs to be white.  I was painting with a dry brush, which means you barely dip it in the paint and then brush most of the paint off onto a cloth or paper, and then paint your actual piece.  The paint goes on very thin, almost like a stain, and allowed the wood grain to show through.
And then suddenly I realized I had forgotten the diagonal white stripes. Frick. 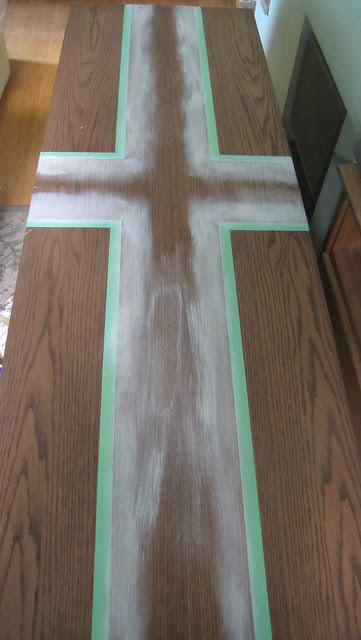 I taped those off, and got a wet cloth and rubbed away some of the sharp edge left were the diagonal stripes meet the horizontal and vertical ones.

I wanted the white to look like it was painted all at the same time.  I wasn't totally successful with that.

So then I taped off for the red stripes, and realized that I hadn't painted some of the white parts wide enough. 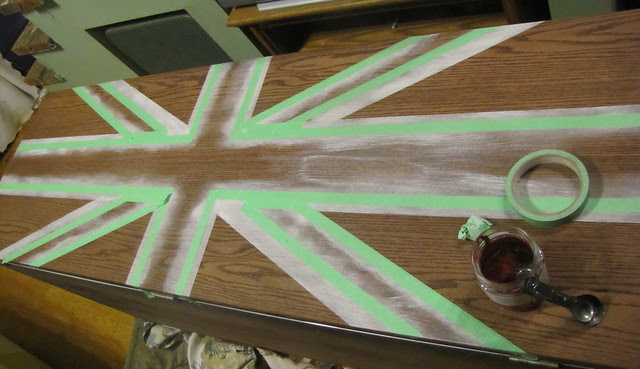 I started to put the red on with a dry brush also, and of course the white underneath some parts of it made the red look pink.  Back to the wet cloth.  Rubbed off the red paint I had put on, and then rubbed even harder to take off all the white paint that was in the red areas.  Painted the red in, and then had to go back and retape three of the diagonal stripes and fill in the white I missed.See the white paint missing in the top two and bottom right diagonals? 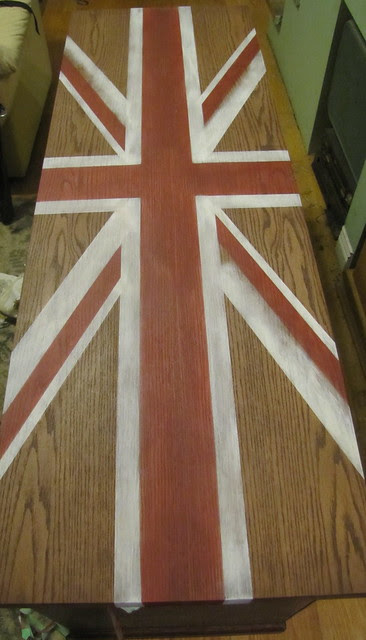 After it was all dry, I gave the top a quick sand.  Then I decided that the stain didn't look as dark as I liked, so I taped off all the stained areas and gave them another dose of stain.  Hmm, just thought now that I could have stained over the paint as well at that point, as per my original plan. Didn't think of it at the time.  In the process, I had the can of stain on the floor, well on the rug, and proceeded to kick the can of stain over.  So then I had to get out the paint thinner and try get the stain out of the rug.  The house smelled of paint thinner.  Good grief, how NOT to paint a Union Jack. I was sure that Meredith would smell it when she came home, and ask about it. (She didn't).
The chest was in the family room, which really does not get used by Meredith, but is where my computer is, and the modem and the D-link.  The only reason she would probably go down there was if the Wi-Fi was acting up.  Sure enough, that happened, and the there she was, sprawled in the computer chair with her feet up on the chest, waiting for the internet to start back up.  I had covered the chest up with an old shower curtain, and it was in the same spot where there had been another piece of wood furniture waiting to be worked on, which I had removed and put in the garage.  Sort of that hiding in plain sight sort of idea I guess.  She obviously didn't notice the difference in height from the switched out piece.

I could only work on the chest while she was at work, so I was rapidly running out of time.  I had some gray paint, added a bit of blue to it, added some plaster of paris to make some homemade chalk paint, and painted the bottom.  It turned out bluer than I had wanted.
Here it is with the first coat of paint on, and I think it is before I put the second coat of stain on the top.  The lighting is bad and the chest wasn't quite that blue, but still bluer than I liked. 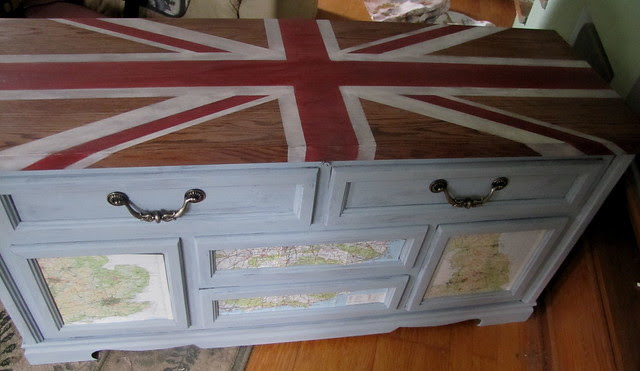 Those fake cupboards and drawers were perfect spots for appliqueing some maps of England.  The previous month, when my favourite thrift store had it's half price sale, I had sat down in the book section and gone through all the atlases and bought the one that had the most maps of England in it (for $1).   Of course I realized after that some of those maps are on the back of a page I wanted to use.  I had a couple of different options, but did want to include the map that showed Harrogate, in North Yorkshire, where I was born.  Luckily the pages were just wide enough to fill in the space.  In a big box of road maps, I had found one from southern England, and it was just wide enough for the two 'drawers' in the middle.  Since I had nothing wide enough for the top two 'drawers', I left them looking like drawers, and cleaned up the original handles and put everything together for a dry fitting.

I took everything off the front, mixed more grey paint in and did a second coat that came out more the colour I wanted.  The top got a coat of Antique Paste Varnish ($2.50 from Habitat for Humanity), and the maps and handles were put back on temporarily.  That is how it was presented to Meredith on Christmas morning.  We are not an overly demonstrative family, but I think she liked it:)  In the next couple of days I got a few more coats on the top.  I got the maps glued down and got several protective coats over them.  The paint was lightly distressed to help the details pop, and then was waxed and buffed to give it a subtle sheen.

The pictures aren't the best.  I didn't want to ask anyone to help me lug the beast outside.  The weather wasn't great anyway.  I had very limited room and a lot of junk useful stuff in the background that I wanted to crop out. 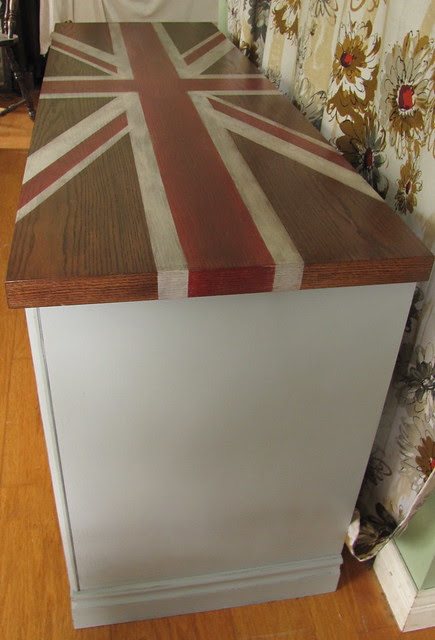 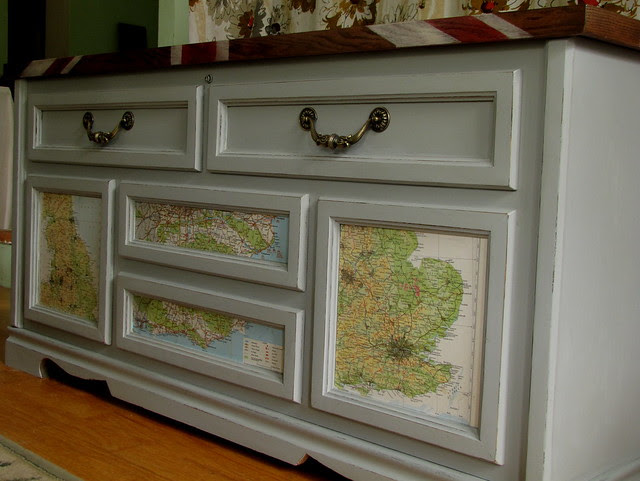 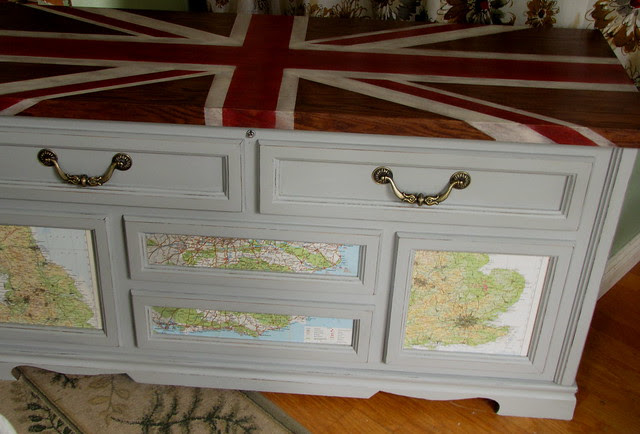 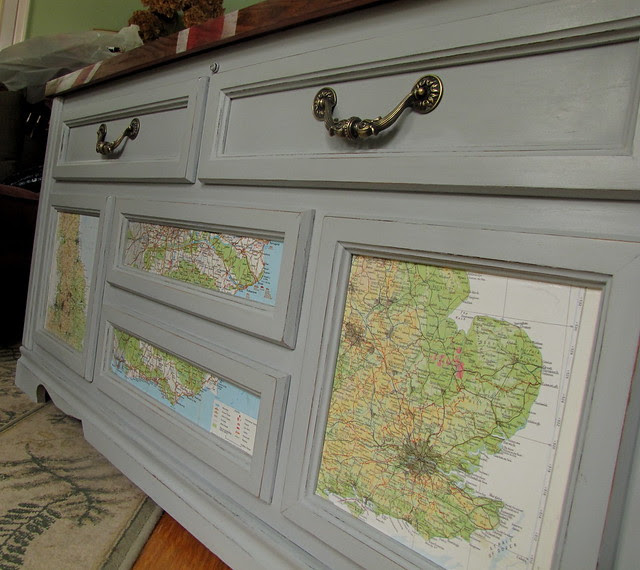 And look, there is a sea serpent in the ocean East Northeast of The Wash. Yep, I managed to get at least one of Nelson's hairs embedded in the clear finish. 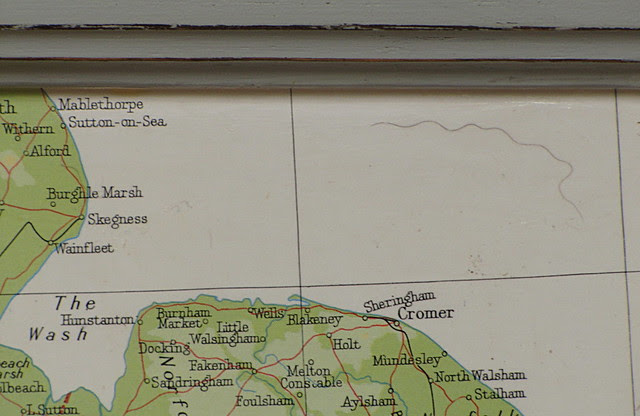 Maybe not everyone's cup of tea (make that English Breakfast!) but I loved doing it and am pleased with the transformation:)