The summer solstice is supposed to arrive here in about 10 minutes. That would be about 10:04pm. Excuse me while I laugh...... or cry.  Crying would be more like it.  It felt like frickin' November today.  It rained. all. day.  It's still raining.  It's cold for the last day of Spring. It didn't get above about 13 degrees Celsius.  That would be about 55 F.   When we went outside this morning, Pride, for some reason only known to Pride, was stood out in the rain. There was some wind too.  He was soaking wet.  He was shivering and cold.  Larry put a thick winter blanket on him and fed him in his shed.  Later in the day, after Pride was warmed up and dried out, Larry switched out the winter blanket for his rain sheet.  The grass in the hay field is just laid out flat, with only the dock weeds still standing upright.  The peas have fallen over.  The slugs are having a feast.  I collected 90 slugs today from the dahlias, potatoes and squash.  That's added to the 75 or so I've already collected in the previous days.  That is one gross stinky bucket of salt water and slugs.

Sorry, I don't have any pretty pictures for you.  Not that slug buckets are pretty anyway.

I was glad to make jam this afternoon to warm up the main floor of the house.  This evening I lit the woodstove.  That just seems wrong.

At the end of last week I did another event that I had entered before I went to Ontario, and wished I hadn't when I got back.  It was called the Longest Day Run (for whatever reason, it was held a week earlier than the longest day).  I entered the 10 K run. There were other options.  ( I should have entered the 5K)  Having paid my entry was supposed to be the incentive to keep running.  I wasn't too bad with keeping up the training before heading to Ontario.  I did manage four small workouts while I was there, but didn't manage anything more than a stroll around the block after I got back.  But, I'd paid my money, and I was going.  It was held in Vancouver, on the campus of the University of British Columbia, a good hour plus drive from here.  Larry was my support team.

Looking mighty happy before the race. 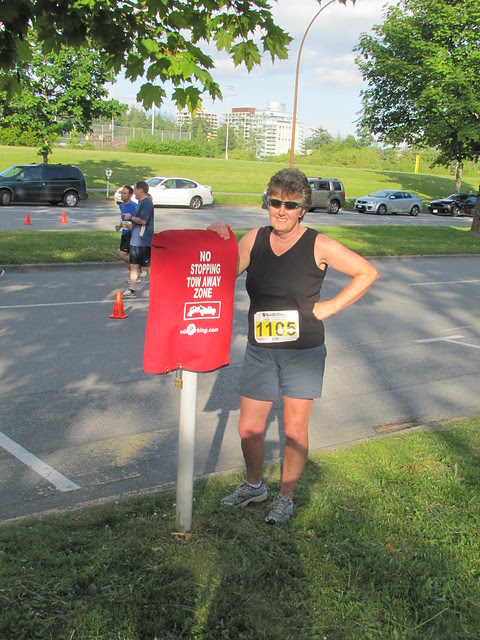 The weather was good, sun in and out from the clouds, not hot, and it was held in the evening, so the sun would only be getting lower and the temperature cooler.  I was running on my own, which made it tougher.  The run was limited to 1500 entries, and it was a much fitter looking group this time.  Not too many people that wanted to check a 10 K run off their bucket list had entered this one.  We started just after 7pm.

The start.  Me in the black to the left of the yellow t-shirt. 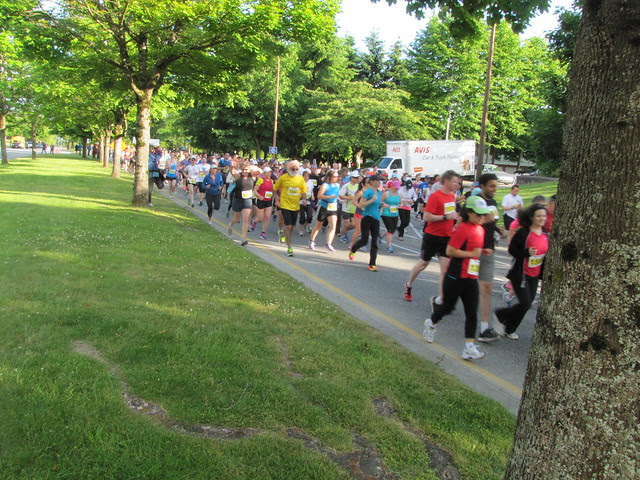 The first part went okay.  I picked different people along the way to keep pace with, but in the end they always seemed to leave me behind.  The kilometer markers seemed to be a long way part.  Somewhere around the 2K mark I noticed that I was keeping perfect time with another woman who was also running on her own.  Eventually I commented on it to her, and said I was going to stick with her.  She said that was good, because most other people seemed to pass her.  We spoke the odd sentence occasionally, and ran side by side the whole way. It was quite fascinating how our feet hit the ground, perfectly in time, like a drumbeat.  I honestly don't think I would have made it on my own if I hadn't met up with Jane (we introduced ourselves at the end).  When we finally got to the 3K mark, I felt like it should be 5K.  It was tough.  Very tough.  Unbelievably tough.  Brutal.

Runners are much more spread out now.

It was sheer will power that kept me moving.  My body was done.  But we kept slapping our feet in time onto that pavement, and eventually we crossed the finish line.  Jane seemed to have a little more reserve than me at the end, although we both did pick up the pace in the last few hundred metres.   She thanked me for being her pace partner, and I did the same, and we both knew how much harder it would have been if we hadn't run together.  Actually, I could barely speak at the end.

Moments after crossing the finish line.  Looking much happier than I felt.  Just before collapsing on the grass. 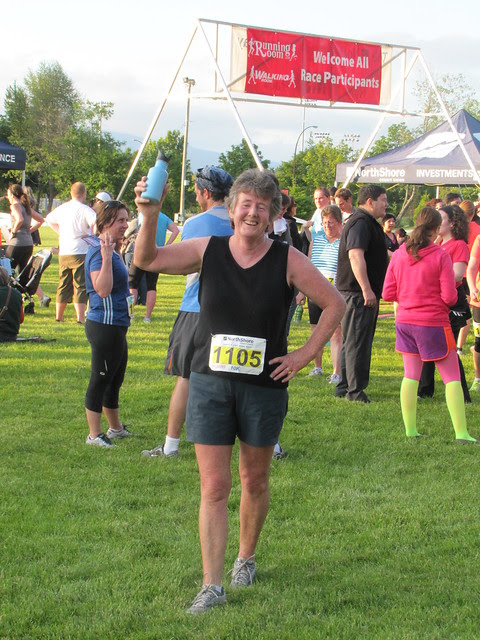 I staggered around for a few minutes to catch my breath, and then sprawled on the grass, totally done in.  Eventually I dragged myself back up and did my stretches.  Not sure if I didn't stretch enough, or I had just pushed my body to the limit, but my legs and hip joints weren't happy for the next couple of days. I finished in 1:03:21.  31 seconds slower than I did the Sun Run.  I was pretty happy with that.
Eventually I recovered enough to think about food.  And there was a ton of free food for us there.  Healthy and not so healthy, take your pick, or take both.  We did, take both that is.
While I was running that race my thought was that I never, ever wanted to do another one.  Will I ?  Oh probably at some point.  Us women seem to have a short memory when it comes to pain.

PS  I went upstairs to watch the 11 o'clock news before I finished this post.  Rain connected to the same system that hit us has caused devastating flooding in Alberta.  OMG.  How dare I complain about a cold and rainy day.  Our house is still here, warm and dry.  Our roads are fine.  Nothing is underwater.  In Alberta and south eastern B.C., may the water drop fast, and no lives be lost.
Posted by Karen at 11:53 PM