Getting Back on Track and Making a Change 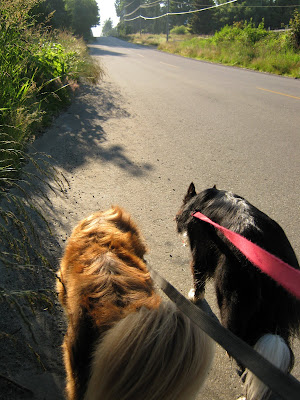 I've been feeling a bit guilty.  Four days without going for a morning walk.  Friday we had to get moving early to be at the park in Mission for 9 for the Canada Day demo our dog club was doing.  Saturday and Sunday were farmers markets, and since there is actually produce to pick for them, there is no time to walk in the morning.  Then yesterday I felt exhausted from the previous three days and I just couldn't interest myself in getting out there for a walk in the morning.  I did get back at it this morning, and just after 7am went for a four miler.
Do you know how hard it is to get a picture of the dogs walking, while you are moving.  Trying to see the image on the screen on the back of the camera, while holding it low enough to show the road ahead... not as easy as you'd think:)
I swear that Luna isn't pulling as hard as it looks, even though she wasn't wearing a gentle leader this morning.
I also want to blog more than I have been.  Lots of times I'll take pictures or videos, with a blog post in mind, but it just doesn't happen.
I have been managing to take a picture, sometimes bad ones, for the 365 Wyndson Farm blog, but even there I'm getting behind with the posting.
So I've decided that as of July 2, I'm going to combine the two blogs, and see how that goes.  A couple of people had suggested it to me, and now they'll be happy to know I'm taking their advice:)
They say a change is as good as a rest.
We'll see about that! 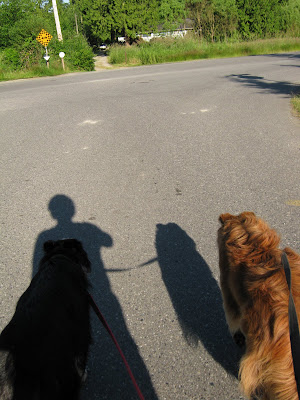