We were sat at the supper table on Thursday, munching through our home grown salad.  At the moment David is working at a local horse farm, and we talked to him about bringing some more horse manure here.
I made a comment about it making the vegetables grow really well.
Meredith commented to the effect that the salad wasn't quite so appealing anymore.
This morning David came over with the manure spreader and dumped a load for us. 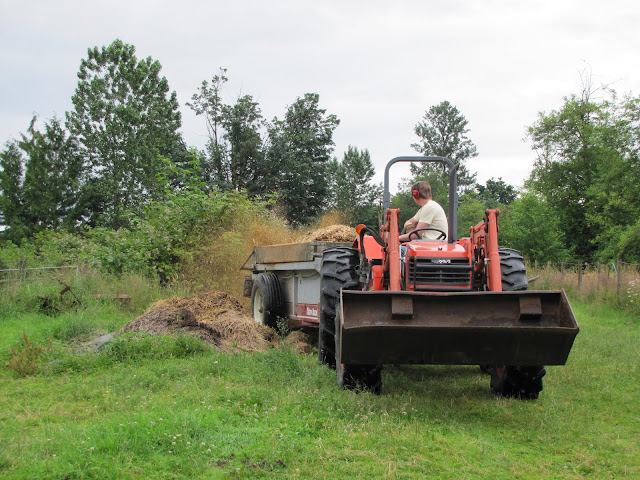 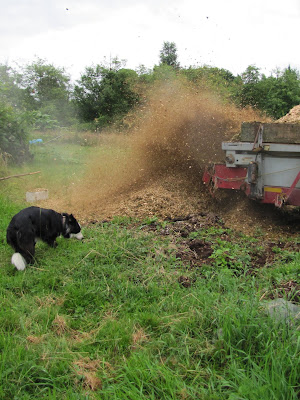 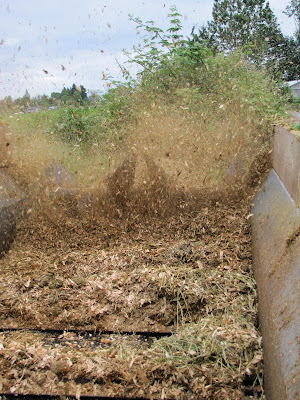 After it's passed through the beaters of the spreader, it's all nicely mixed.
Horse manure, horse urine, wood shavings and stems of hay. 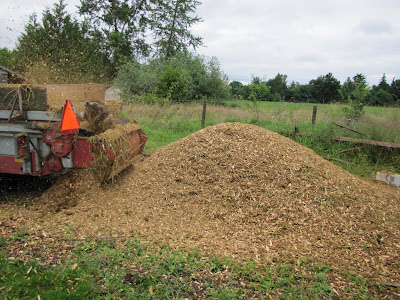 The stems are from alfalfa.  Alfalfa has tremendously long roots and it brings micro nutrients and minerals from far underground.
From the University of Minnesota....
Beneath the lush green leaves of an alfalfa plant is a surprisingly large root system. Alfalfa roots grow about 6 feet per year in loose soil. Metabolically active alfalfa roots have been found 60 feet or more below ground level. It is this large root system that is at the heart of the valuable traits of the crop. The ability of alfalfa roots to form an association with soil bacteria (Sinorhizobium meliloti) and “fix” atmospheric nitrogen into compounds that satisfy the nitrogen needs of the alfalfa crop, as well as the nitrogen needs of the following rotation crop, is well known. The ability to fix nitrogen also enables the plant to provide highly nutritional protein-rich forage. The deep root system allows alfalfa plants to access soil moisture that is not available to annual crops with shallow root systems, making alfalfa more drought-tolerant. Another function of alfalfa roots is to store carbohydrates produced in leaves so that plants can regrow rapidly after harvest and green-up in early spring. As an added advantage, the extensive root system and early spring growth of alfalfa reduces soil and nutrient loss from nearby bare soil. Thus, a healthy alfalfa root system is key to maximizing yields, forage quality, and stand life. 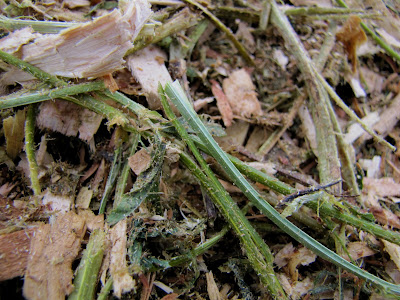 We'll get a few more loads dumped, and then tarp it over before winter so the rain doesn't leach away a lot of the nutrients.  We'll let it sit until it's nicely rotted.
Some of it might get used on the garden late next year, or it might even sit until the year after that.  We already have a pile that has been sitting since last fall, and it will be used first.
Free organic fertilizer, and free delivery.
Too bad the spreading on the garden part doesn't come free too.
Posted by Karen at 10:39 PM