Well since I've been home I've been trying to keep the momentum rolling on the project thing.  You know, if I can do projects at my sister's, I'd better get some projects done at home.  It's a bit depressing at home though, because the project list is just endless.

My green house, which is 12' long and about 8' wide, has seen better days.  I think it's about 25 years old.  When we built it we bought the actual greenhouse corrugated fibreglass to cover it.  Since the long walls faced north and south, we saved a bit of money by making the north wall out of wood and painting it white.  Eventually the fibreglass got so weather beaten, especially the south facing roof, that even when it was pressure washed it was not letting in enough light.  The tomato plants were a bit tall and spindly.  I'd have to pressure wash the whole roof and the south wall every year, and that was a job and a half.  Last year I didn't even use the greenhouse.

Since my tomato growing and selling was so successful last year with my gazebo frame greenhouse, I figured it was rather silly not to take advantage of a greenhouse I already had, albeit a greenhouse that needed updating.

Last Saturday we went to three garage sales.  The last one was massive, an estate sale and a house whose basement was jam packed with junk.  Too overwhelming for me poking around in all that unpriced stuff, but I did find a roll of really heavy plastic that I was able to get for $5.

The next day we went out and removed all the south roof and wall. 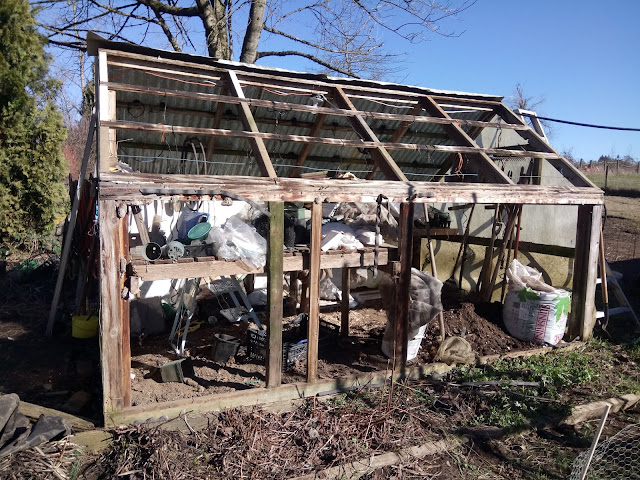 I didn't think to take a photo before we started, but that is the wall piece in front and the roof at the back. You can get a sense of how non translucent it is now. 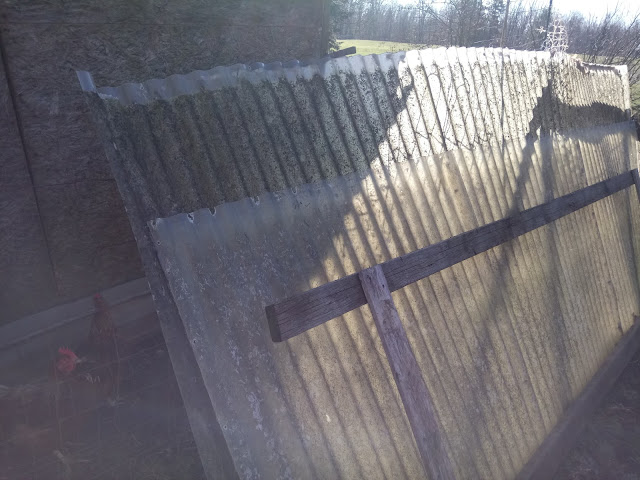 I'll spare you all the details (oh it's hard not to bore you with those!)  I rolled the piece up on a pole and got it up near the ridge while I stood up through the open roof and fastened it at the top and nailed the ridge cap back down.  Then unfurled the beast and it went not too badly.  Some lath screwed over the plastic at the rafters and over the edges to hold it all in place.  I've made it so that in the summer I can roll up the wall.  The plastic is already fasted around a pole at the bottom, and I just  have to undo the screws in the lath where the wall plastic bends round onto the end walls and roll the pole up.  Fasteners to keep the roll up still need to be done, but I've got that sorted out in my head.  Now I think the plastic is actually a heavy vapour barrier, so not sure it is the right thing for letting the correct rays of sun through, but it's got to be better than before because it is so bright and light in the green house now. 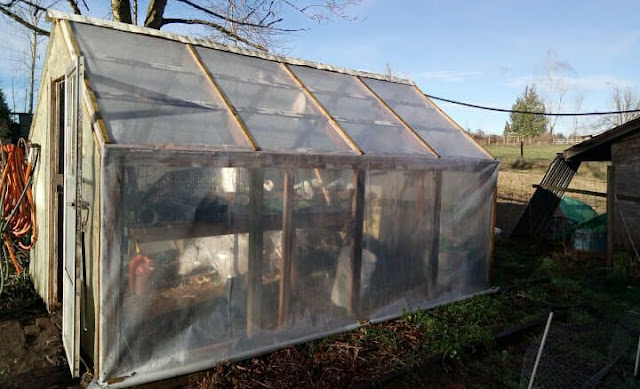 The north facing roof was REALLY dirty.  There is a maple tree high above, so lots of drips from the leaves. 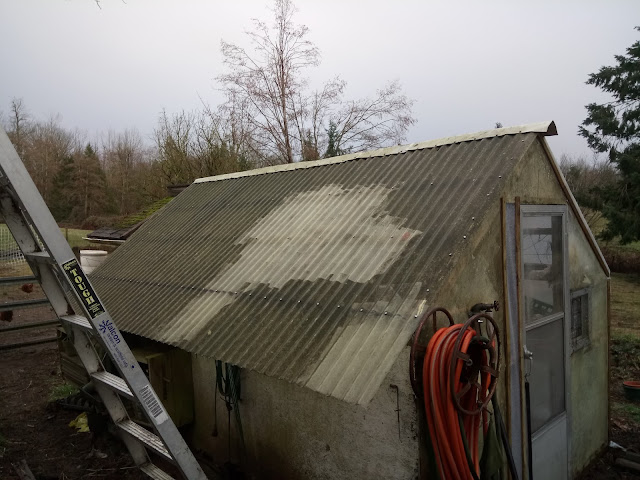 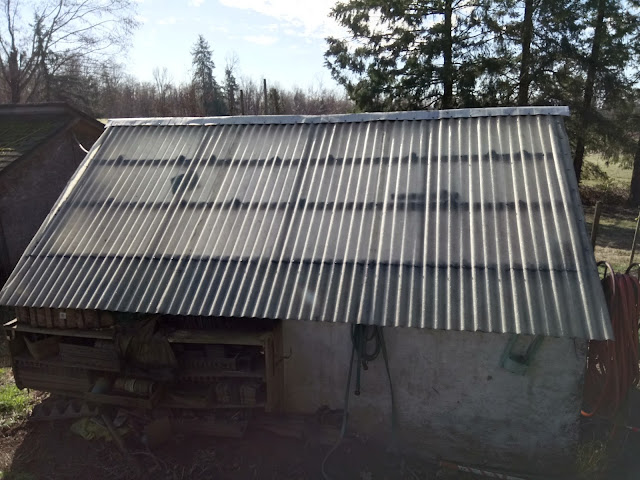 The previous door more or less self destructed several years ago.  We had this small screen door and decided it was easier to install it instead of making a new door.  The door was a bit narrower, but we just put plastic over the extra space.  One funny thing.  There was a wheelbarrow of compost in the greenhouse.  We didn't think to take it out before we put the new door in.  The wheelbarrow was too wide to fit through the new door! Thankfully once emptied in there and turned on it's side we were able to get it through the door.  Our favourite green plastic wheelbarrows fit through just fine!
The flat fibreglass on the ends isn't too bad once it gets cleaned up. 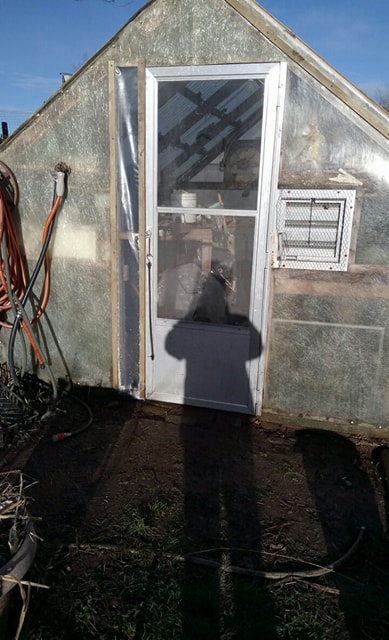 Now I just need to get busy and get some seeds started!

In other news the four footed furry family is doing well.  Luna and Jake go every 6 - 8 weeks for chiropractic adjustment.  Luna was running funny last Sunday and had a real hitch in her trot.  Her pelvis was badly twisted but that got sorted out, with Luna feeling some discomfort during the process, but she was much happier after it was done.  I could tell she felt better as she was carrying her tail at a much more jaunty angle.  We stopped at the dyke on the way home and had a nice walk.  We've been walking here for many years, and some where I have a photo of this same old piece of tree, taken 20 years ago. 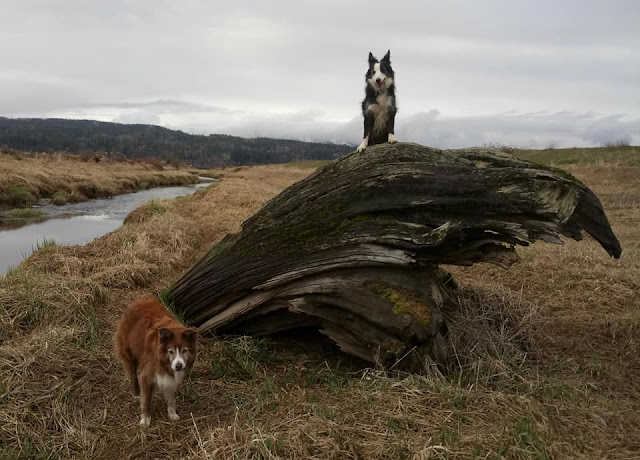 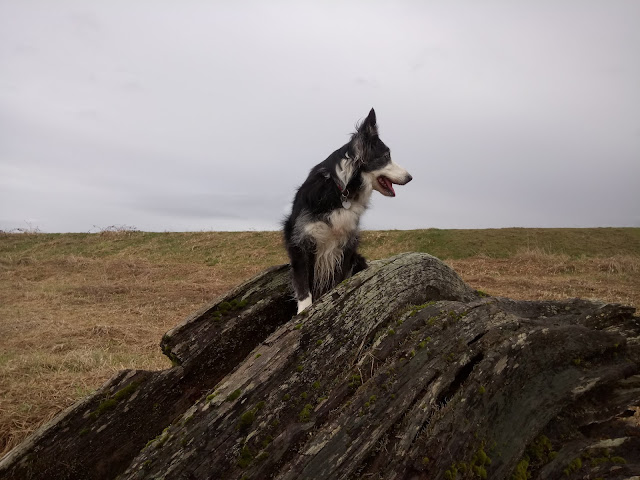 The swimming hole changed quite a bit over the winter, now it has a nice sandy beach! 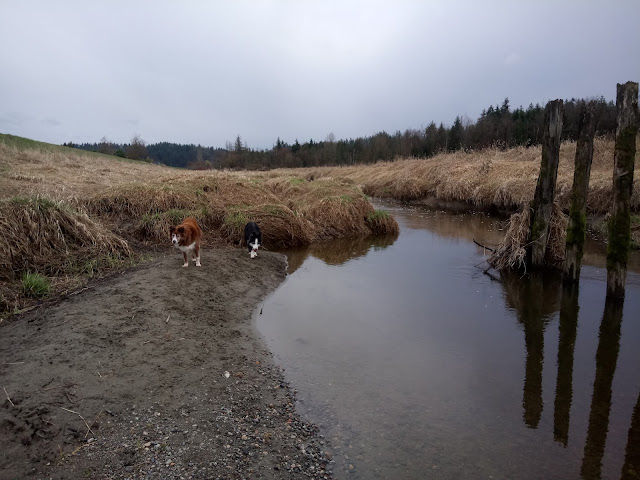 Old dogs like to snooze in the Spring sunshine.  Sweet Jake will be 14 this summer. 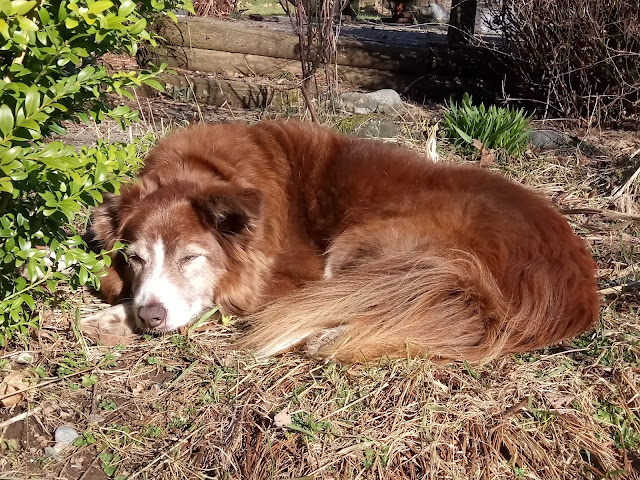 And Spring is really here!
It will be official shortly, but we have had some lovely warm sunny days.  I've worn capris on two of those days.  Sun hats and sunscreen are becoming required accessories again! 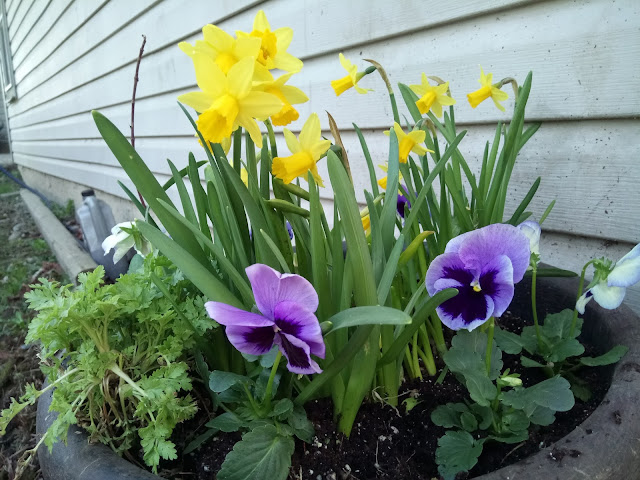