It was Thursday around suppertime.  I was messing around in the kitchen, maybe doing some cleaning up after an earlier jam making session.  I'd seen a bit of the early news on tv, and a story about a house fire, caused by a cigarette, had caught my attention.  The tenant on one floor had been saved by the tenant on the other floor, and the fire had reignited later in the day and fire department had to return to the house.  I happened to glance out of the kitchen window and was horrified to see a massive plume of black smoke coming up behind our barn.  I just couldn't fathom it.  I ran outside and when I got far enough I realized that it was not our barn, but a huge barn on the property next to us.  The roof was fully engulfed.  I screamed for Larry, and then ran back inside to call 911.  I did figure that a call would have already been made, but one can never be sure, and better to be safe than sorry.  I may have only ever called 911 once before.  I can only imagine the feeling of panic if the emergency directly affected the caller or one of their family.  I had forgotten or hadn't realized that the call wasn't going directly to a centre in Abbotsford.  I was asked if it was fire, police or ambulance.  Then asked what city.  Then the phone rang and rang and the operator actually came back on to tell me it would be answered shortly.  Then again I was asked what it was for and it rang again. Some one answered and asked if it was the McTavish Rd fire and I said yes.  He asked if it was my barn and I said no.  All that seemed to take forever, much much longer than it took you to just read it.  I was feeling panicky with the waiting. 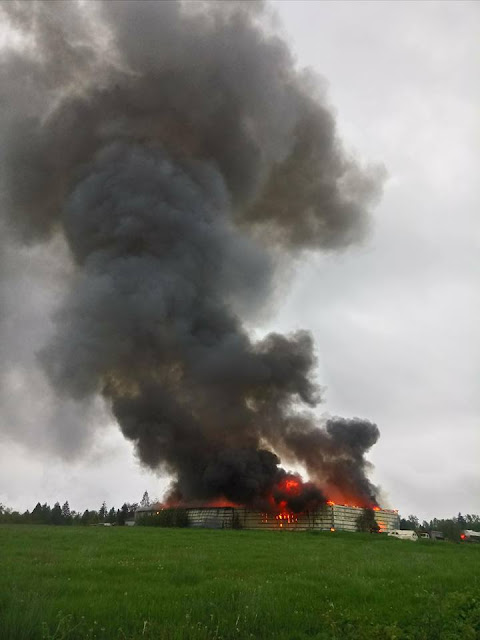 Our closest firehall is a volunteer one, about 7 minutes away.  We could hear sirens coming from farther away and a slightly different direction. Probably the fully manned hall about 11 minutes away.   Lots and lots of sirens.  We couldn't see the trucks arrive because they came up the driveway out of sight on the left of the photos, and were on the other side of the barn. 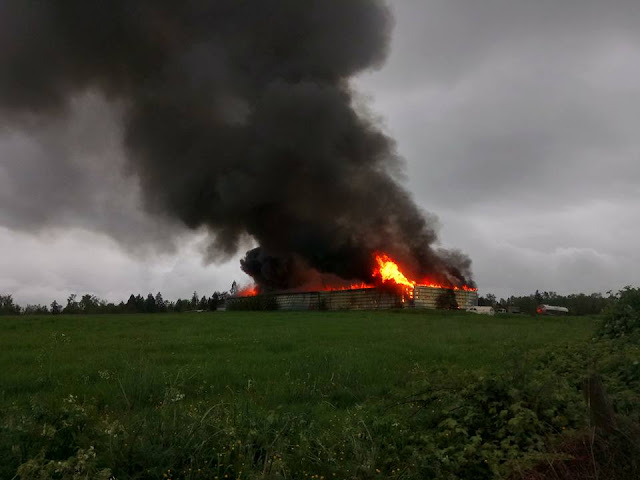 We eventually heard the water hitting the flames and the metal 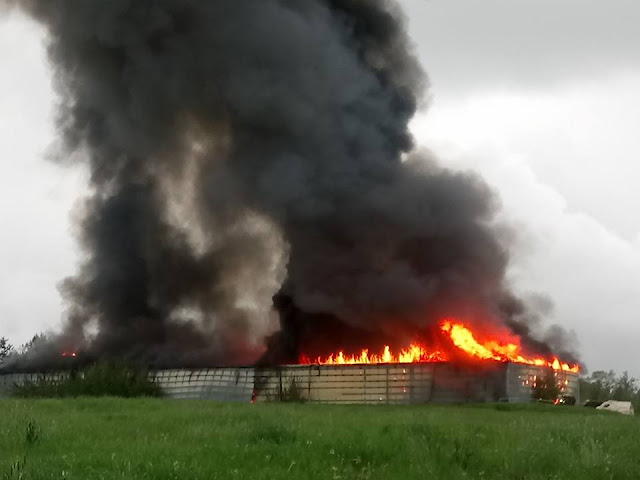 I think the roof had already caved in by the time we got a good look.  These photos were taken from our back hayfield.  When things had burned down a bit we did get the odd glimpse of a ladder up high, and water spraying from it. 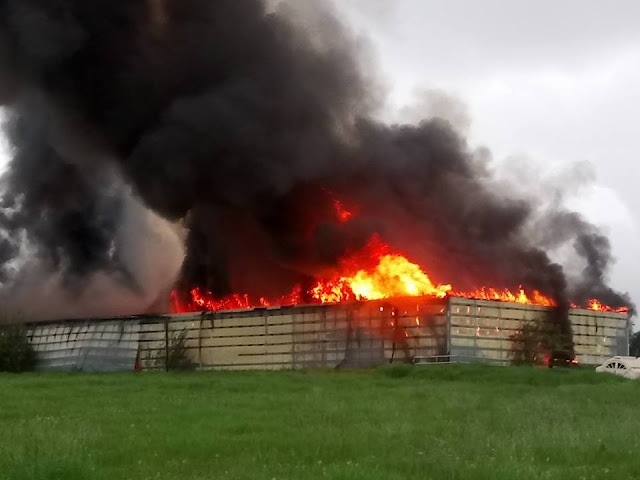 The barn was 180' long and about 40-60' wide.  It had been used to store machinery as far as we knew.  The other side is fully open down the length of it.  Since the cladding was all metal, we could not figure what was making it burn so hot and long.  It turns out that a lot of round hay bales were stored in there also.  Perhaps they were the cause of the fire.  We eventually wandered back to the house, and then after dark a massive light stand had been set up and it lit up the smoke cloud.  Apparently they stayed a long time to make sure that there were no hot spots left in the hay, and poured thousands of gallons of water on it all.

(I took the next two photos this evening because the ones I had taken yesterday morning were a bit blurry.)  But this is exactly what it looked like the next morning.  Not wisp of smoke to be seen. Nothing left of the barn except a bit of the north wall, and the row of concrete support beams that had held the roof up down the open side. 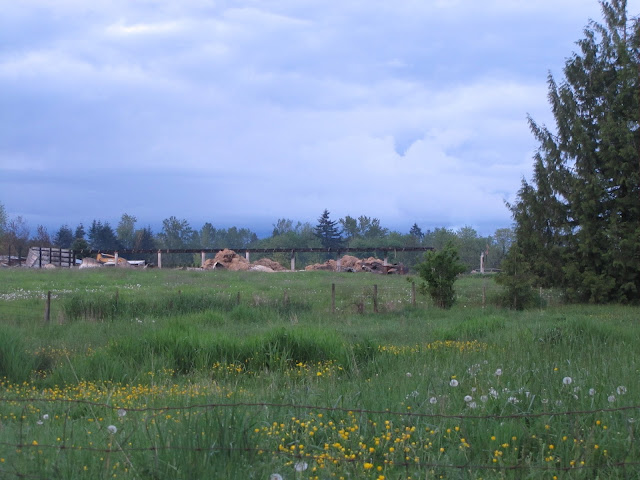 Apparently there had been a boat and a motorhome, a tractor and a hay mower in the barn, an lots of hay by the looks of it. 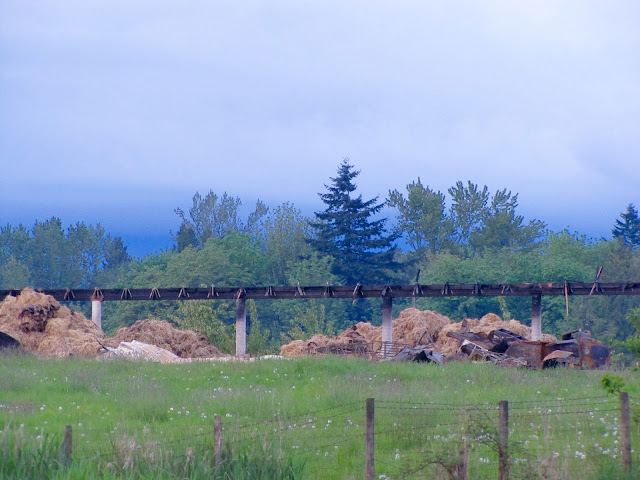 We were out for our morning walk with the dogs through our back bush.  We were getting close to the little creek and I could see a big white mass.  What on earth was it.  As we got to the creek where it tumbles out of a bit of a culvert into the little pool that Luna likes to dunk herself in, there was a massive foam sculpture.  The smell here was a very strong smokey/chemical odour.
See Larry standing behind it, to give you a sense of the size of the thing. 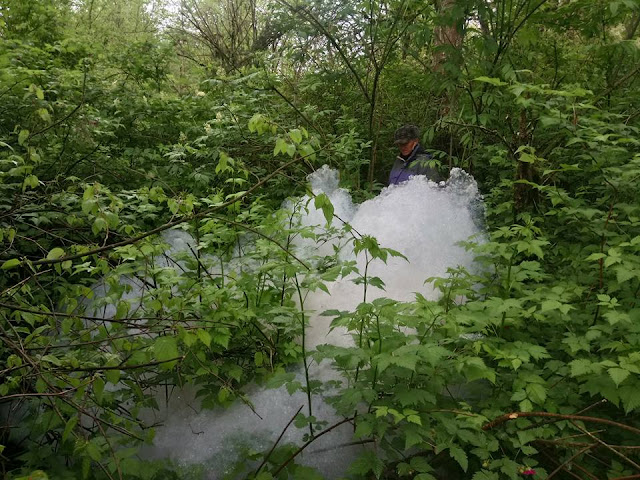 When we crossed back over the creek further upstream, we could see blobs of foam here and there and again that strong smell.  I did contact the fire department to ask about the foam.  I was told that it was as environmentally friendly as it could be, and still do it's job.  Like diluted dish soap, vegetable based, no carcinogens, not a concern.  I mentioned the smell.  The environmental crew was coming out to check it out.  He mentioned the massive amount of water they had to pour on the hay to put the fire out, and all that water will be draining through the ground and some of it into the creek.  He said there may be a concern depending what was leaching from the barn.  The barn was originally built about 20 years ago as a place to do maintenance on a fleet of trucks involved with a carnival ride company.  The neighbours protested, so then they were only supposed to use it to store the trucks, but...who knows what went on in there.

And that other call I have made to 911...that was about 20 years ago, when the predecessors to the barn that just went up in flames....went up in flames also.
It was about the same time of the day..a propane tank on a food truck from the amusement ride company somehow caught on fire, and we watched in horror as the flames leaped down the row of barns and destroyed them all.  Fortunately neither man nor beast was hurt in either fire.  There are different owners now.  I wonder if the barn will be rebuilt.  A large local farm was leasing the field and barn, and the house is rented out, and the renters do some horse boarding. Different people have leased the land over the years. Not all of them have been good neighbours.
The whole neighbourhood is changing.  Many of us are getting to that age, and with the booming property market, the For Sale signs are going up.

Okay, this is getting depressing.
I'll finish this post with something a little more light hearted.
I'm filming this from the bathroom window.
Luna and her young, but not so little any more, protege.
She has taught him well.  She did not teach him to bite a hole in the hose though.  He added that touch himself, at an earlier time.

He won't be here too much longer, and I'll miss him when he goes.