You are probably wondering what those random numbers are all about.  Well that was what Meredith and I had to do for our 10km training on Tuesday night.  I was dreading it, and so was she.  We've been plugging along, doing okay, but yesterday was a big jump.  So first we do a 5 minute walk, and then those numbers, so 10 minutes of running, 1 minute of walking, then 15 minutes of running, and minute of walking, then 20 minutes of running....well you get the drift.  Add on 5 minutes of a cool down walk at the end, and then some stretches.  The previous couple of weeks we had worked up to 4  x 10 minutes of running, so this week it seemed a big jump to go to 55 minutes total, and having to run 20 minutes straight.  We are so thankful for those one minute walks.   Anyway, it did turn out okay, we managed to get it done, and actually felt easier for the last third compared to the middle third.   Four and a half more weeks to go.

This twirly thing hangs outside our dining room window.  I should have taken a picture of the whole thing, but was trying to be artistic and capture the rain drops on the bottom part.  The twisted part is long and gradually gets wider and there is another piece at the top.  We had a few birds hit the window before I hung it up, but it's doing it's job and there have been no concussions since.  I bought two of the twirlers at the thrift store (of course), thinking I would hang them near the blueberries or the fig tree in the summer.  Funny, today I was in Dollarama and they are selling almost exactly the same thing there.  $2.50 each.  Oh well, I got two from the thrift store for that price. 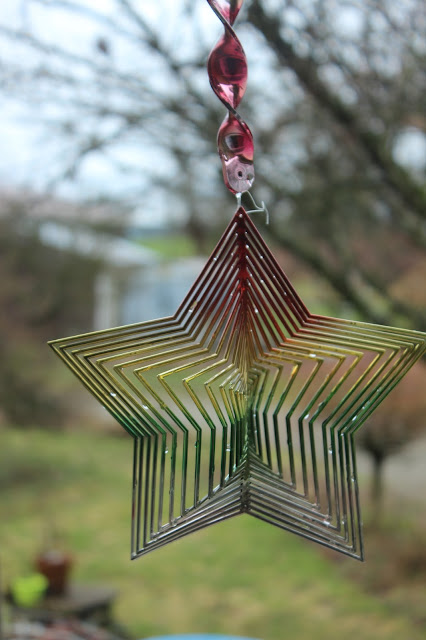 We seem to have exchanged our white (snow) for wet (rain).  Just lately we have had a few dry days, but we are in for more rain in the next week.  Today actually got quite nice and warm, and I did a bit of outside work.  It is the perfect time to garden, but there is so much to do, sometimes it is hard to know where to start.

My favourite nursery was clearing out these little Tete-a-Tete daffodils, and the Hyacinths, for two pots for $1.  Flats of pansies were $5, and more recently, the pansies were 2 flats for $5. 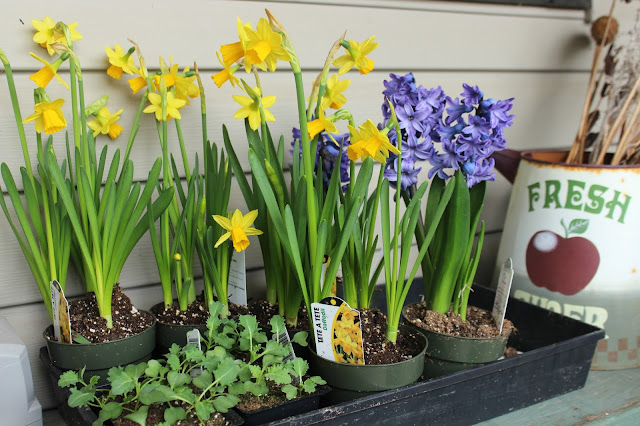 And see the little kale plants?  These two little boxes had double the amount of plants in them.  Usually they hold 6 plants, and these had 13.  I really need to get them transplanted.   Is anyone else like me?  I always look through all the different boxes and pick the ones that that have the most plants in them.  Why pay for 6 when you can pay the same amount for 13!
Of course I should be seeding them myself, and I will be, but often I can't resist buying some.

Since not much is happening yet here with Spring flowers, I decided I needed to make my own bits of colour.  The pot behind Tucker, and two more further along the wall, are full of colourful pansies now. 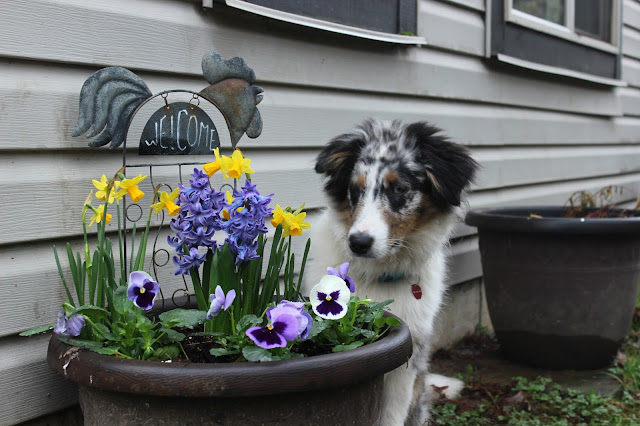 I'm still trying to spend a bit of time in the sewing room each day.  I've made nearly 60 bibs now, although I still need to go through them all and cut off stray threads and weave the ends of the serger chain in and out of sight.  That's about 50 bibs more than I started with last year ;-) 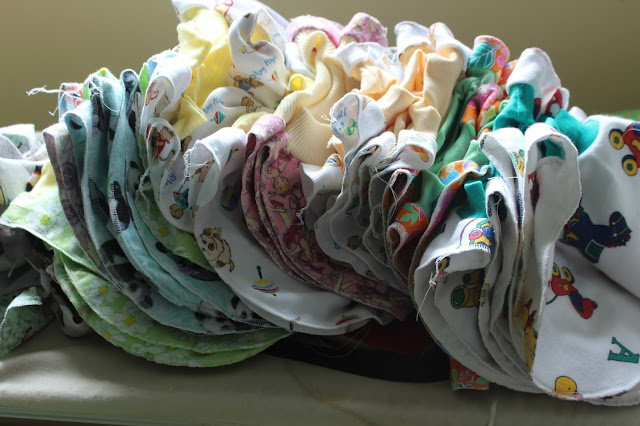 Here's Tucker, as I look from the kitchen window.  At least this time he is chewing something appropriate, sort of.  The end of an old bone, if I recall correctly.  It seems like every day he eats something he shouldn't.  Sometimes I look out and he is running around madly with a plastic plant pot in his mouth, before he lays down and tries to eat it.  He needs to be supervised most of the time.  He's a little stinker, and a lot of fun, and a lot of work.
We will enjoy him while we can, as David has only two weeks left of classes at University, and then will be moving in the near future to wherever his job will take him.
Tucker is 6 months old next week. 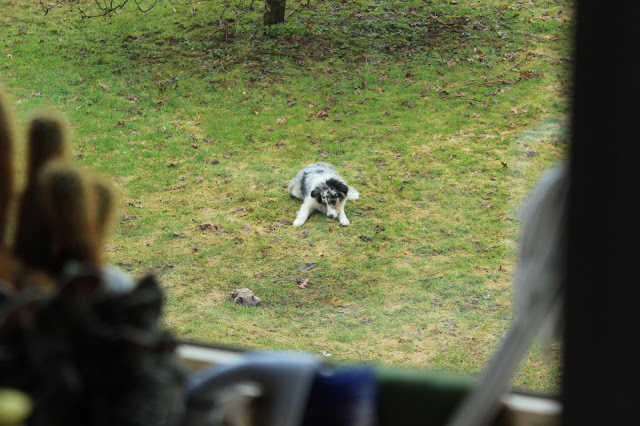 Well this sure isn't much of a post, but at least you know I'm still alive and kicking!
And Round Dancing on Wednesday nights.  Oh my.  We come home exhausted and sometimes, okay, most of the time, feeling frustrated at our inabilities to remember the steps.  Oh well, we are still sticking it out, still speaking to each other.
Unfortunately a fellow and his wife that Larry used to work with, quit.  In her words 'we want to stay married'.
She 'got it' much better than her husband did, and the frustration just became too much.
I understand how she felt, it's a familiar feeling some nights.