(You may want to skip this first paragraph, it's just me, wanting to make everything clear (as mud) as usual).

On our way to Oliver, we took what I refer to as the back way.  When we get to Keremeos, which is 45 minutes from Oliver, we have a choice of going north towards Kaleden, or south to Osoyoos. Neither route is direct. There is another route, a rough road that goes over the mountain out of the back of Cawston, which is just south of Keremeos, but while probably the most direct route, it takes just as long because you have to go slower. I guess that would be the back, back way. We've only taken that once. In case anyone is interested, you can zoom in on the map below for a better view.  I'm often surprised how many BC people don't know exactly where Oliver is. I think it is because it is between two main routes. Those would be north from Keremeos to Penticton and Kelowna, the two main Okanagan resort towns, or south to Osoyoos and points east. As you can see, Oliver is not very far east of Keremeos, if you are a crow. Anyway, the back way for us is heading north towards Kaleden, and then turning off at the Twin Lakes junction and heading towards White Lake and Willowbrook. (if you zoom in you will see it).

We have often passed this sign, seen the trails on the hill, and thought that some day we should take a walk there.  Usually we are arriving at Oliver around dark. This time there were a few hours of daylight left, so we made a snap decision that it would be a good place, a new place, to take the dogs for a walk, and then we wouldn't have to walk them later. 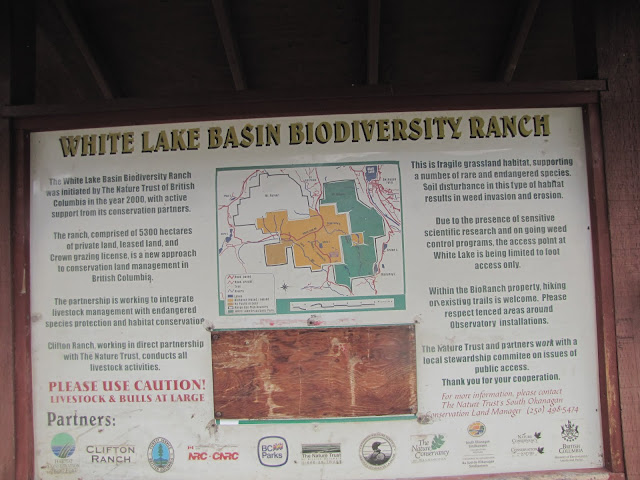 There was another sign talking about it being a conservation area, dogs having been found down at the lake, and harassing cattle, and there was a possibility of dogs being banned from the area, so please keep them on leash, and we did.

As you can see it was a very grey day, not really cold, but the wind sure made it seem that way.  As soon as we set off down the laneway, Calli was just marching right along, out in front.  When we got closer to the lake and the corrals, the trail headed uphill. It was quite damp in that area, with running water (which was really quite a surprise to see, in such a dry area), so we kind of had to pick our way across the slope to avoid getting our feet too wet. 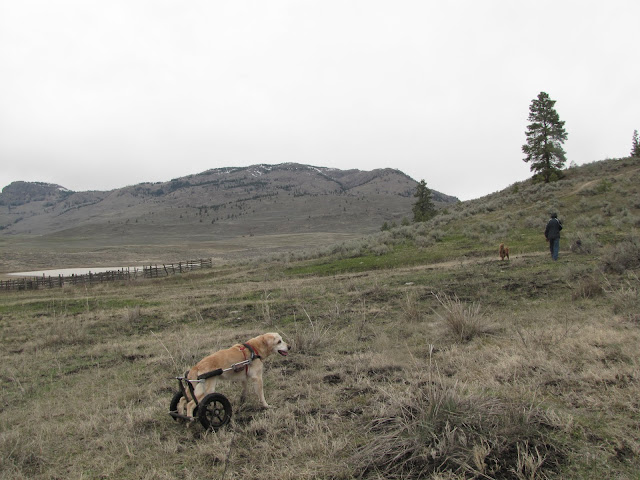 We made it up the first hill.  You can see the lane we started out on running at an angle below. I had to literally pull Calli up, she was game to try but it was steep enough that she would slip back each time she lifted up a front foot if I didn't keep pressure on the leash.  The leash is attached to her cart. 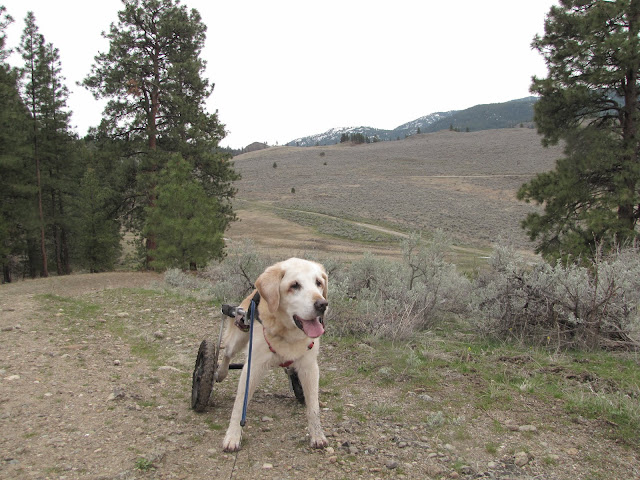 After that hill there was a gentler one, and she was out in front again. More running surface water. 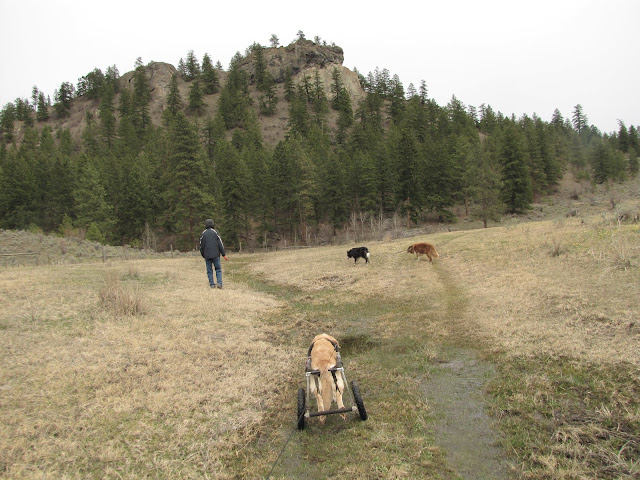 At the top there was a lake, mostly fenced to keep the cattle out, so the birds were undisturbed. But one end was open, and old tired dogs needed a drink. 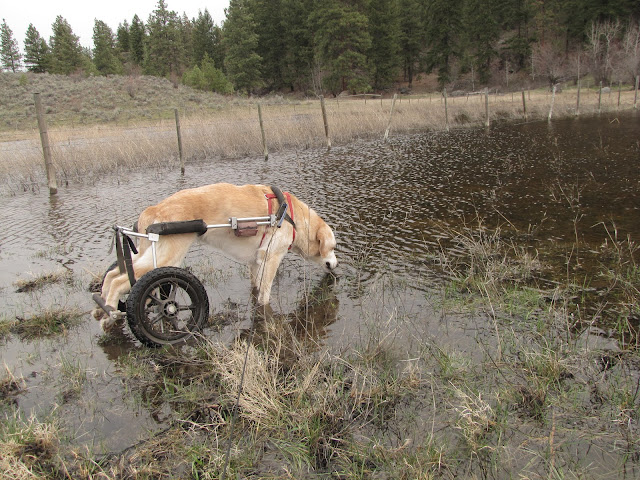 We were interested in continuing on, but the trail continued uphill, and we had come quite a way already.  Time to turn back.  We didn't need to overdo it with a 16 year dog who only has two good legs.


When we got to this spot, I said 'oh lets try take a photo all of us'.  So I managed to prop the camera on a rock, set the timer and then ran down the hill to join the group, which got Jake and Luna all bouncing around in excitement.  All I got was a lot of blurry shots of me trying to control the dogs and Larry making a weird squinting face, trying to see if the camera was actually taking any pictures.
DELETE! 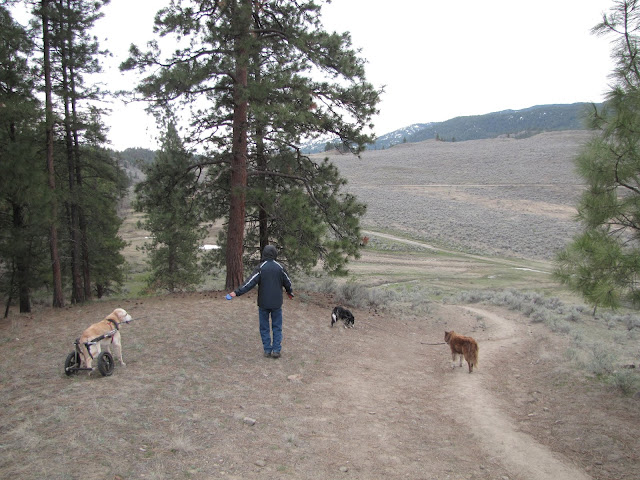 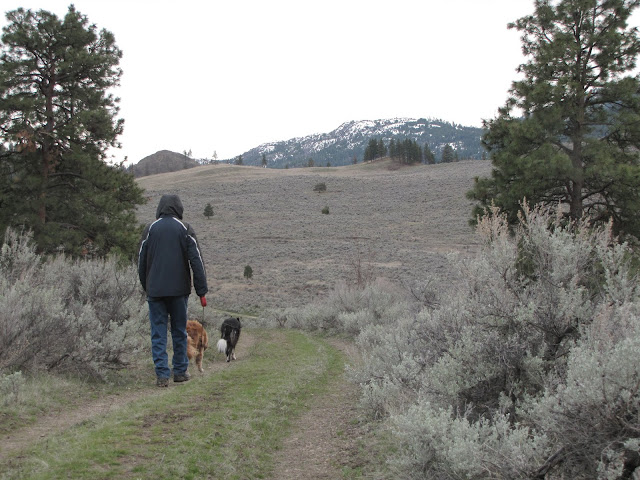 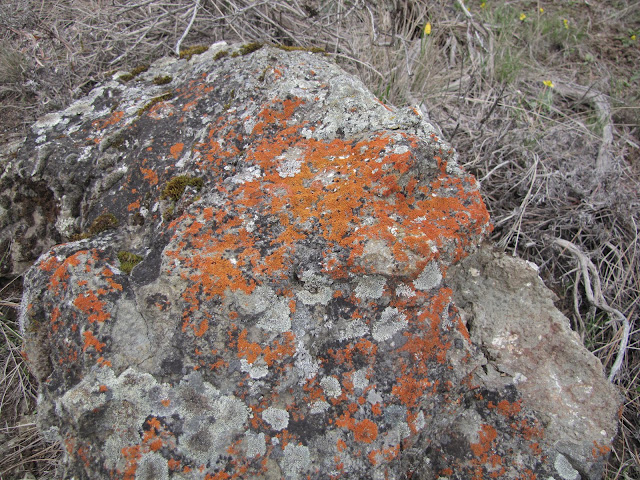 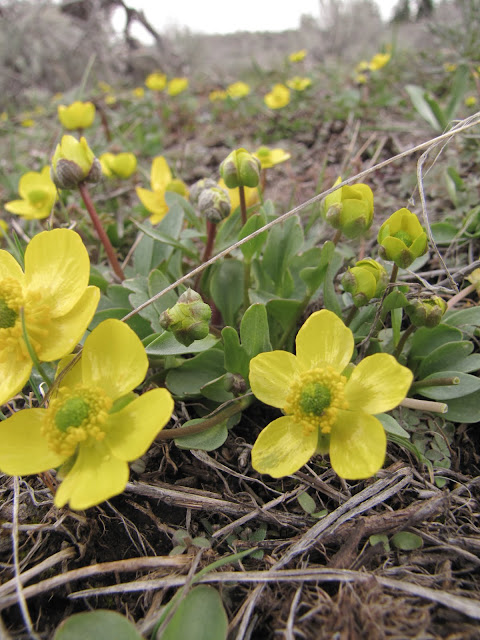 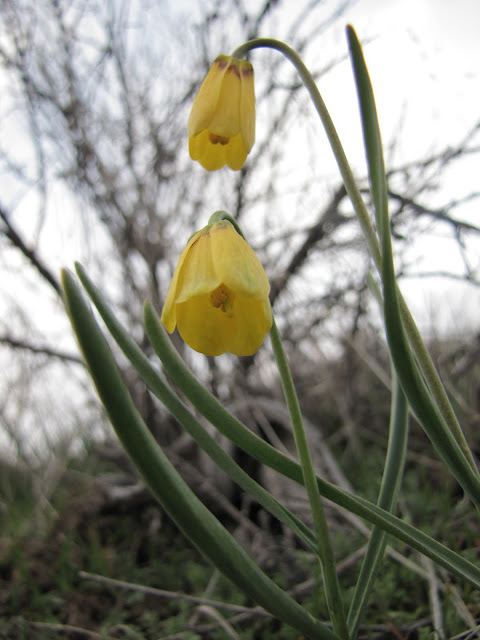 Younger dogs waiting for the old dogs;-)
There was something about the light that made Jake look extra red.
And the wind was still howling. 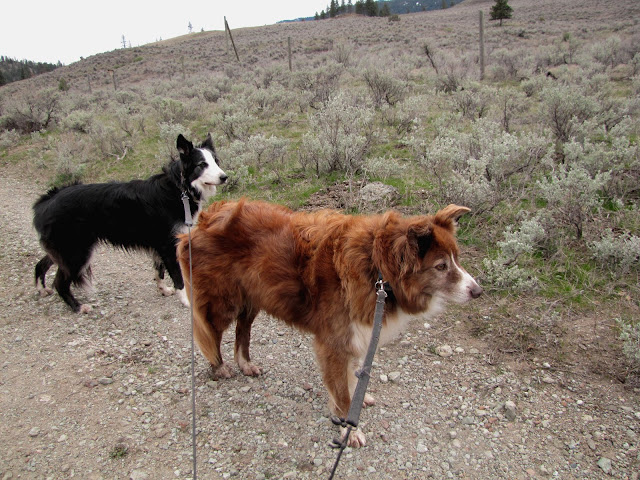 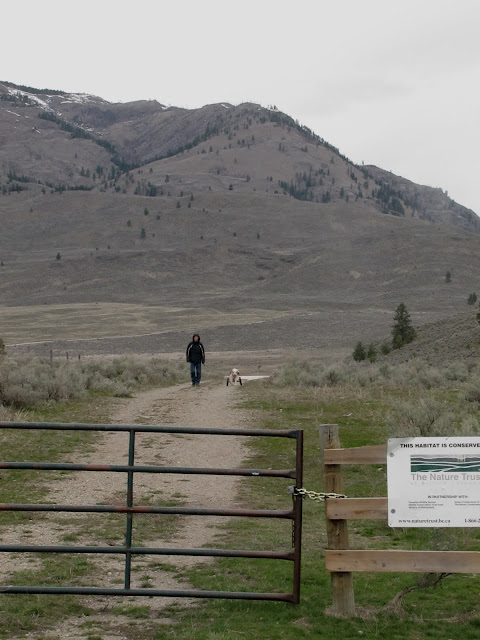 And as usual we pulled into Oliver right around dark.