This row of Douglas Firs has been in the background of quite a few of my pictures.  They were wee little trees when we planted them not long after we moved here 28 years ago. They are almost on our south property line, just above it, at the edge of the fill that was added sometime before.  Now the tallest ones are reaching for 70'.  They look rather rangy and spindly in this photo, but stand right next to them and they are fairly impressive.  I found that out the other day.
This time of the year they are a bit annoying, because they cast such a long shadow.  One of the vegetables gardens is to the north of them, and right now is still in the shade of these trees. 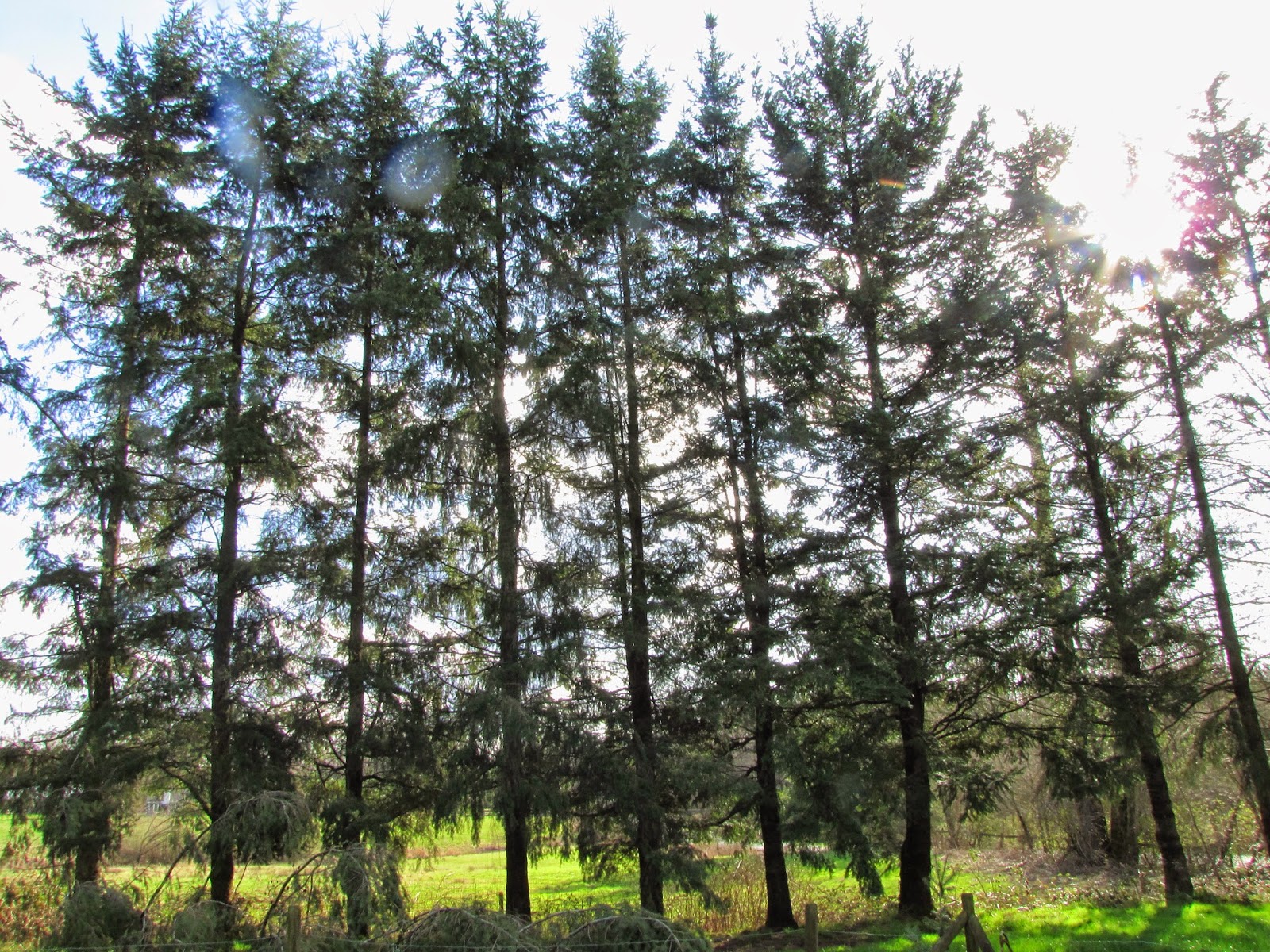 I had casually mentioned a few times to Larry that if we took a couple down, (there was a shorter one and a skinnier one next to each other that looked like good volunteers), that it would create a window of sorts and the sun would at least sweep across the garden and melt any frost that was lingering in the shade, and help to warm the soil a little bit sooner.  A few days ago I mentioned it again, and Larry said something like, okay, lets live dangerously, and went and got his chainsaw.  We knew the trees were taller than the distance between them and the garden fence, so the plan was to take them down at about a 45 degree angle, to try miss the fence.  Thankfully they were growing fairly straight up.  The the angled piece was cut out of the northwest side of the tree, and the other cut was done on the backside, and the tree didn't move.  Great, or not so great, and then I started to worry, and was regretting it all.  In the end, the placing of two wedges, and some pounding got the tree moving ever so slowly.... 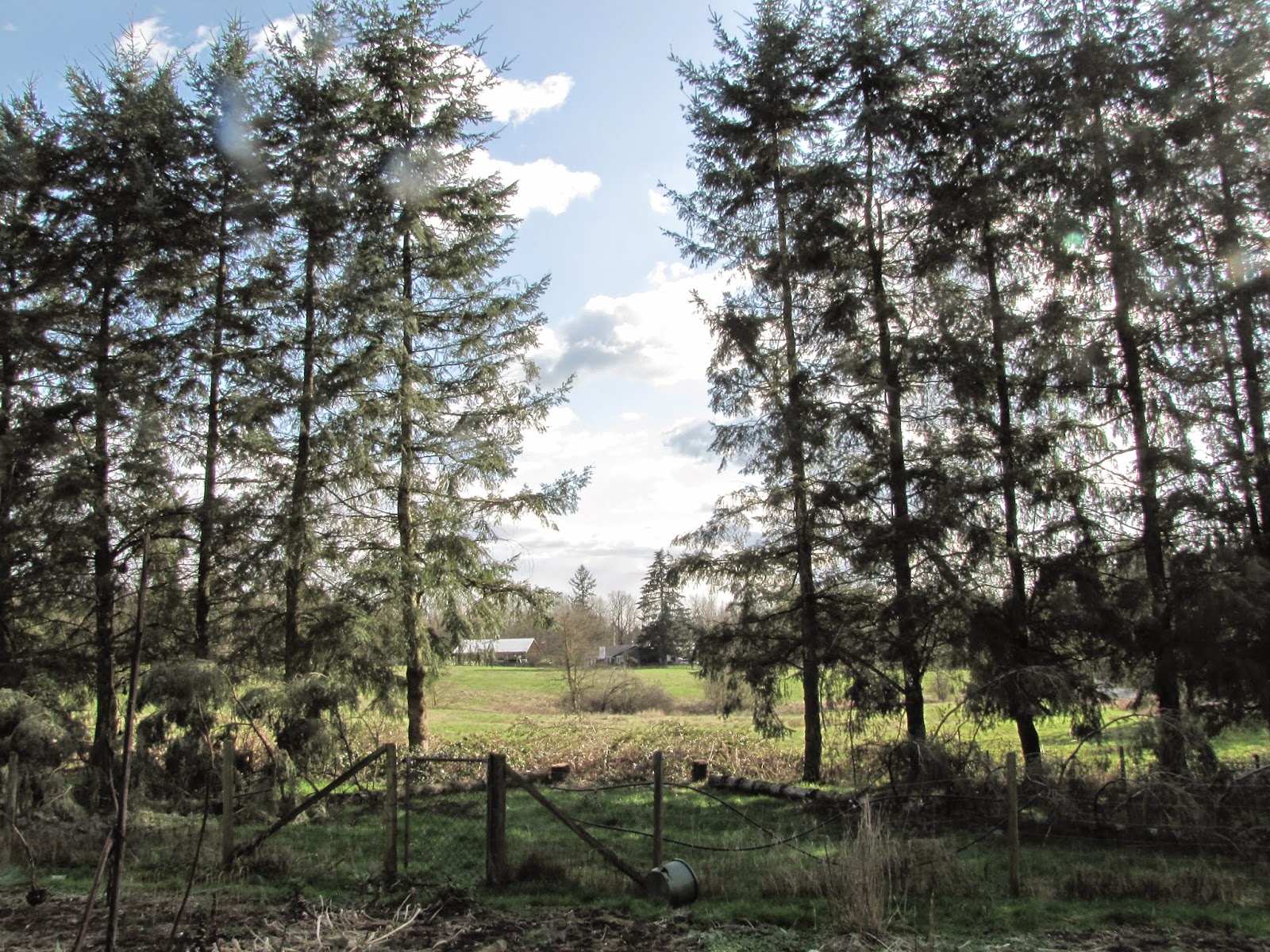 And it landed perfectly, just missing the corner of the garden fence, extending past it about 10 feet. 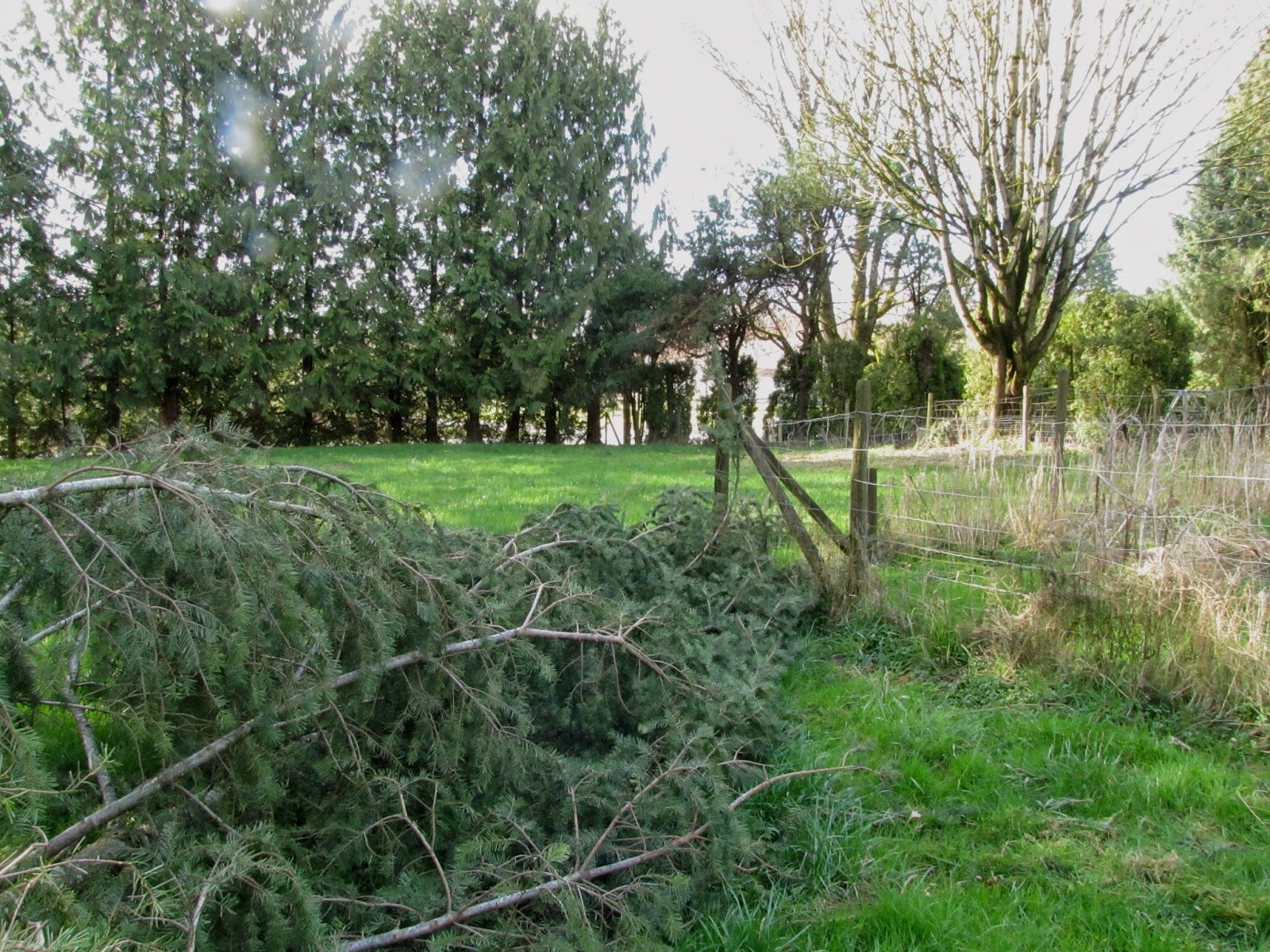 The same thing happened to the second tree, it just hung there, not moving.  Larry was concerned about the branches getting caught up in the tree next to it, so he over compensated and the tree came down too far over and landed on the fence, about the top 6 feet or so.  Fortunately it missed the posts, and just pushed the wire down.  He sawed off the top part and we pulled the wire back up, and all is good. 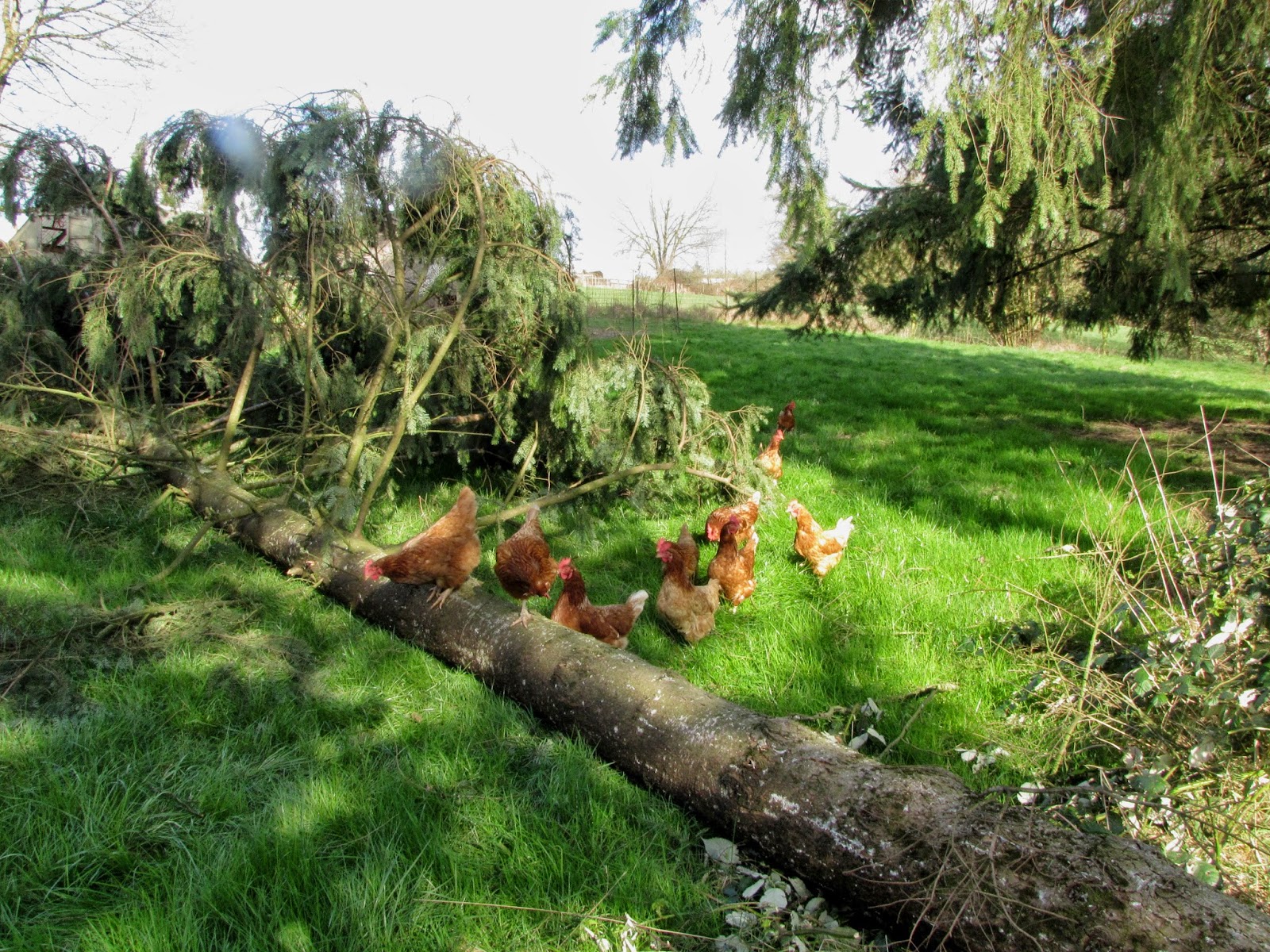 The hens were really impressed! 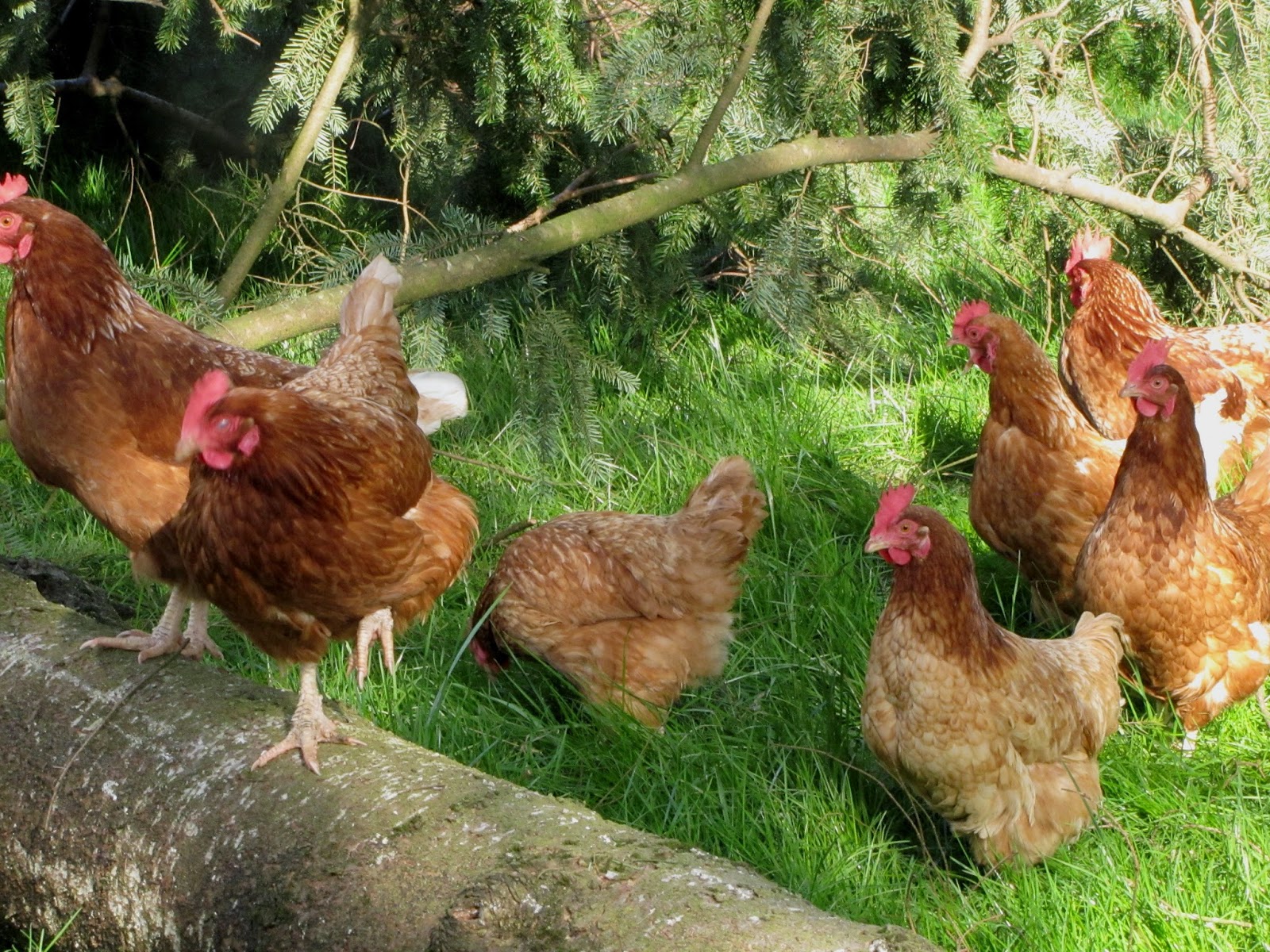 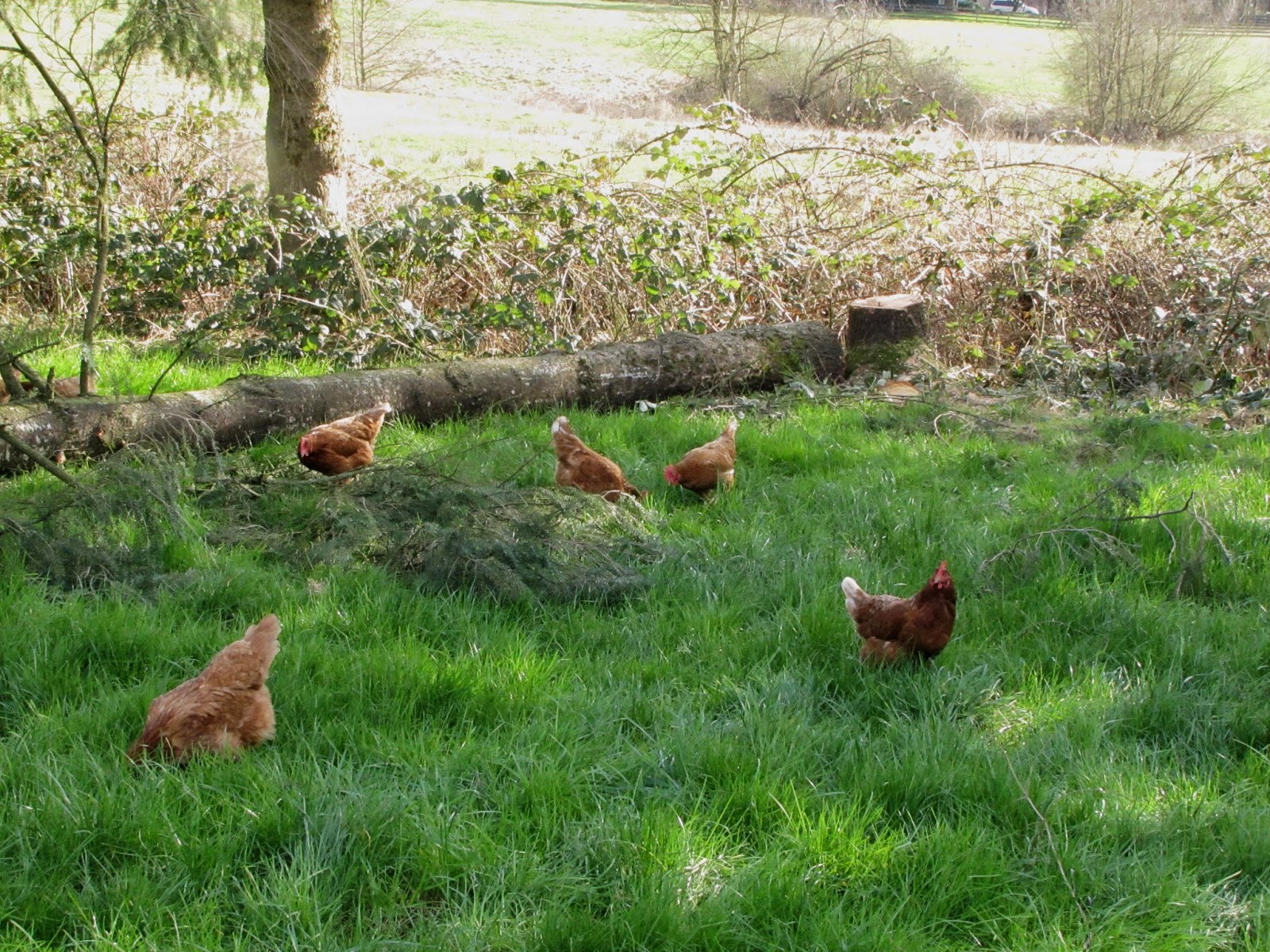 So the kale, which is sending out some new shoots, (they aren't as big as the photo makes them seem) was in the sunshine instead of the shade that afternoon. 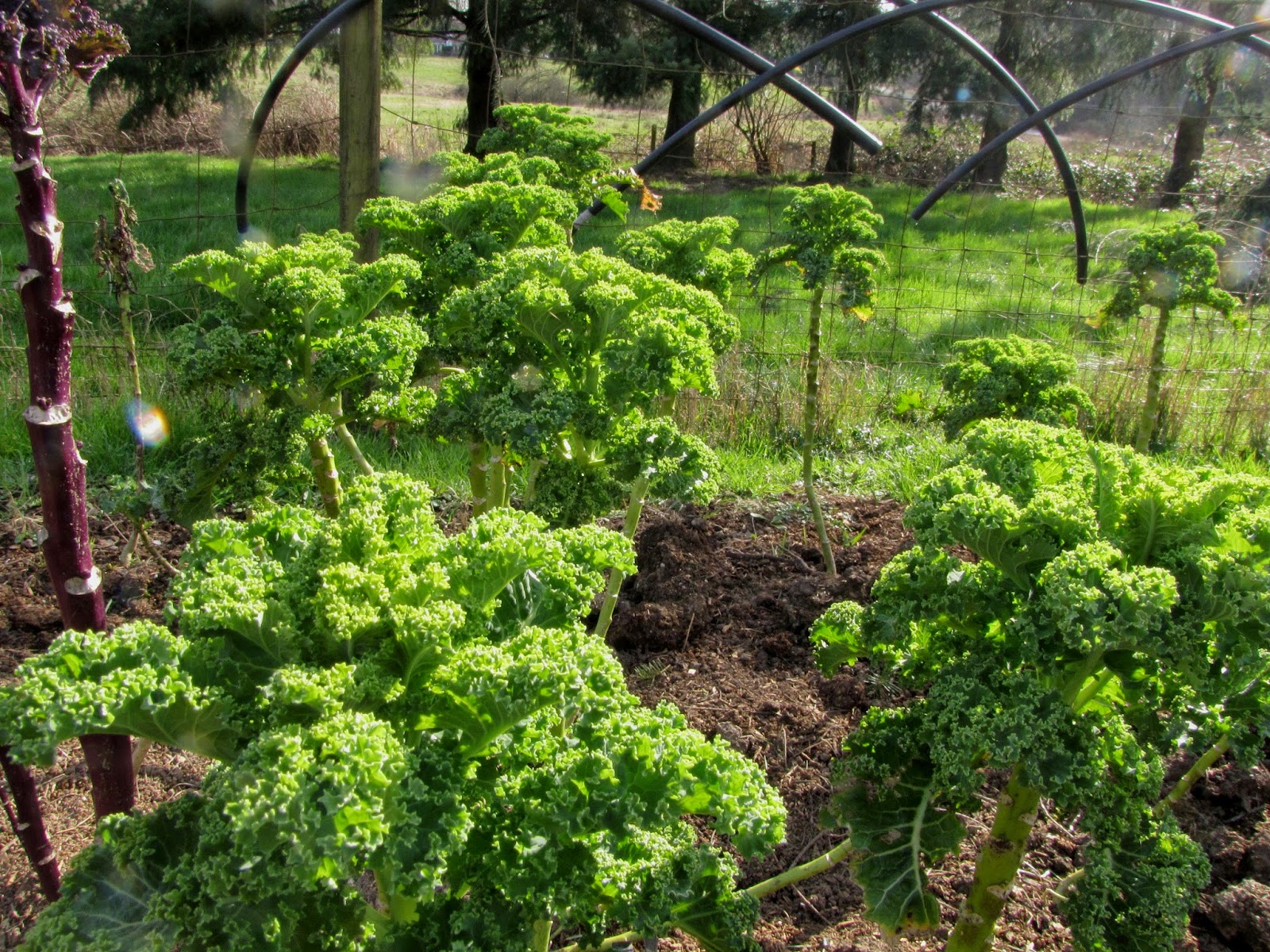 The collards have new growth on them too, so I've stopped buying greens now, and we'll just eat our own. 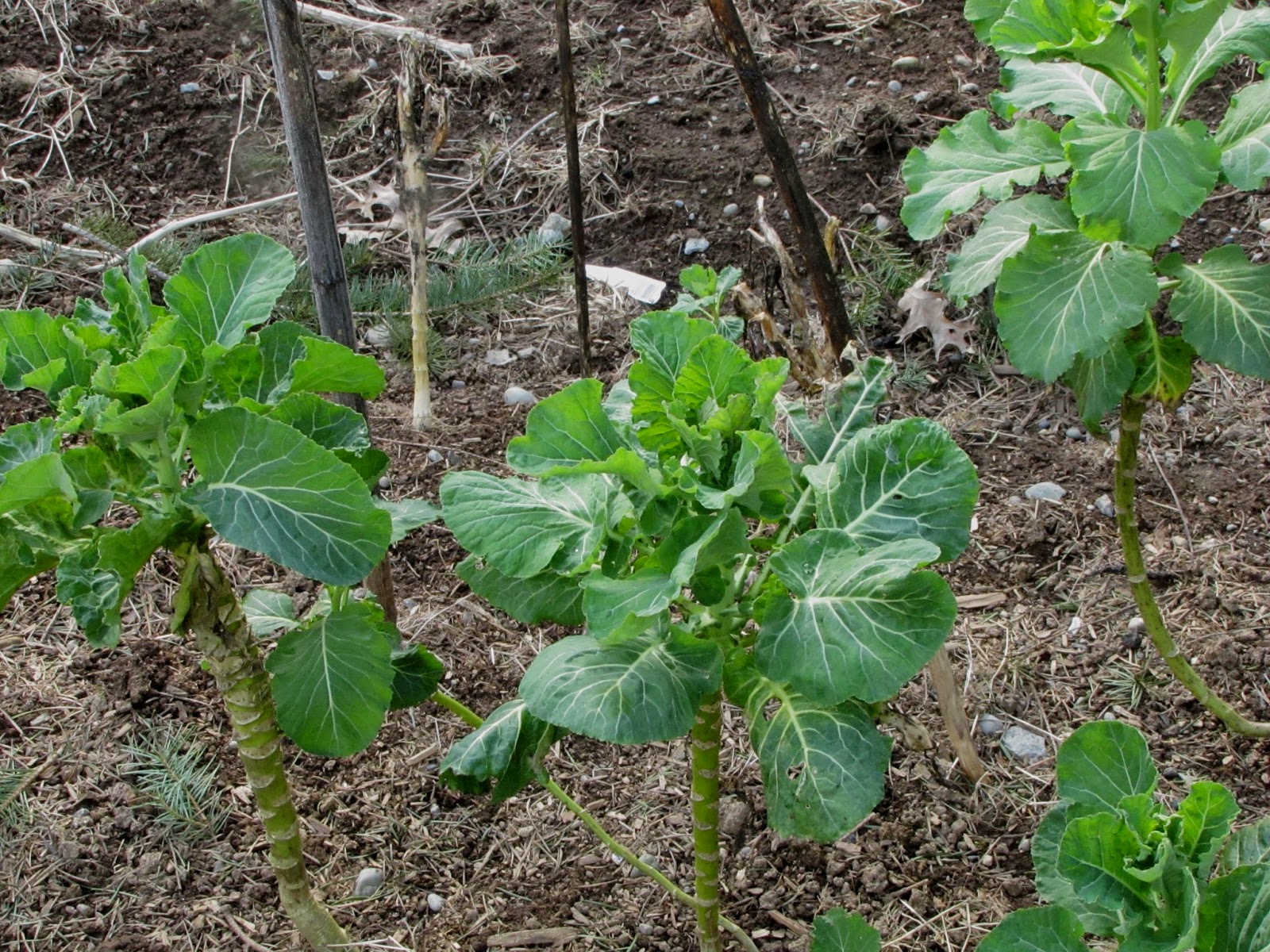 The garlic is really going gangbusters too, I think I planted 280 cloves, and there aren't many that haven't come up. 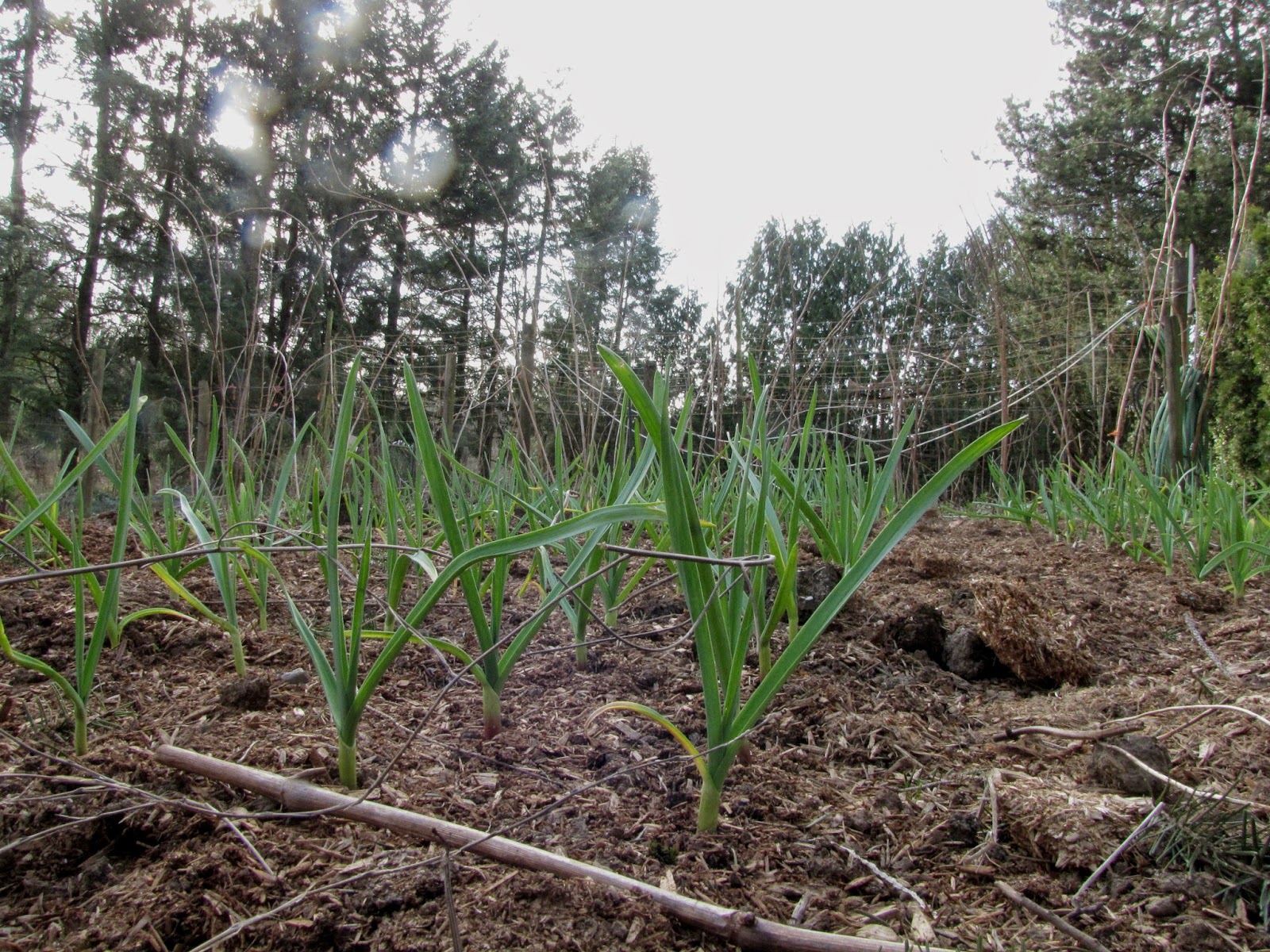 We've had such amazing weather lately.  This week we've spent a lot of time outside pruning the pear, apple and plum trees.  With some of them I wonder if it is worth the effort, as we don't get much fruit off them.  The last couple of years the plum and apples trees were either not done at all, or only partially pruned, so there was some pretty major stuff to come off.

Because it's been so nice, we've made Calli stay outside for a while, especially since we have been working out there.  After our morning walk all she wants to do is get back on her bed in the basement, and she would lay there all day until it is time for the afternoon walk.  So we took something out for her to lay on, and then before we knew it she would have dragged herself down the driveway and would be barking to go back in.  Finally I took the short ex-pen out and that kept her in place and quiet for a bit longer.   She was not impressed at all though, but seems to be getting used to the idea, and is taking some naps out there.  One day we even managed to sneak off for a half hour bike ride without her noticing, (she is quite deaf now) and she was still napping when we got back. 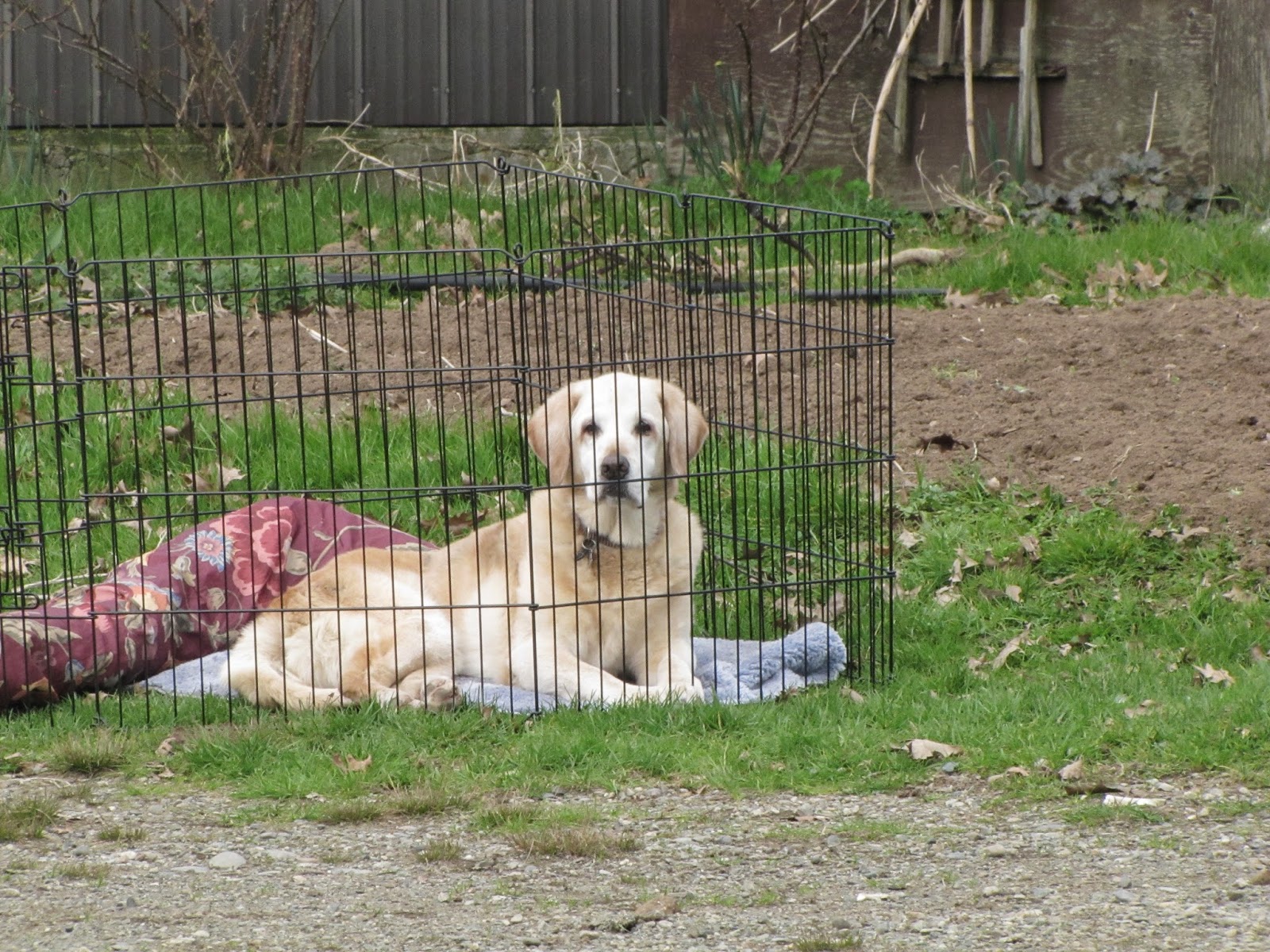 Spring is here!
(and I have now cleaned those spots off the camera lens)