Despite having been bred for generations as commercial egg layers, the hens still retain many of the instincts of the original stock.  One of those instincts is to lay their eggs in a safe hidden place.  The nest boxes in the coop fill that need for most of the hens, but there is always a rebel in every group.

Back in January when we had a cold and wintry spell, our rebel decided, even though the weather was totally inappropriate for raising a brood of chicks, that she would give it her all.  It took us a while to figure out what was happening.  By the time we did, she was already sitting on those eggs, determined to hatch them.  First of all, the chances of the eggs even being fertile were slim.  Our little bantam rooster (that's him in the header photo) spends the night in the other coop.  During the day time he does fly out of his field, checks out the seed under the bird feeder, and then goes and visits the girls from the north coop.  There are 50 or so hens there, and I don't think there is enough of him to go around, so there is a good chance the rebel hen's eggs weren't fertile to start with.  Then we had some below freezing temperatures before the hen finished laying that clutch, so eggs that were already there may have frozen overnight, or got cold enough that any potential embryo was no longer viable.  When a hen is in that frame of mind, she doesn't know or care, she just wants to sit on those eggs.

So this particular hen had been flying up onto the roof of the coop and then out over the gate into the area behind the barn, to go and lay her eggs there. 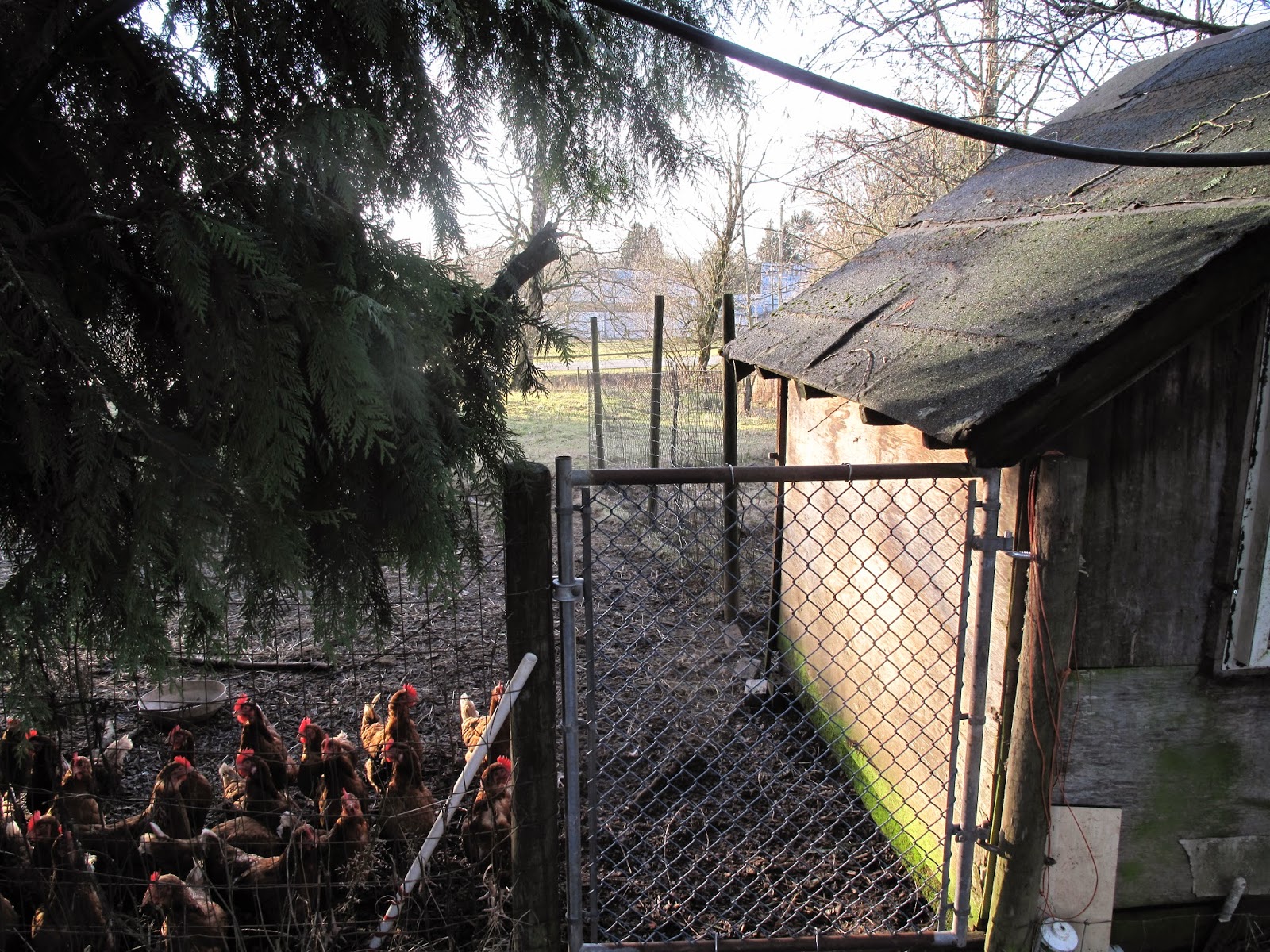 She had been waiting for the coop to open one morning so she could dash in for some food, and then head back to her eggs.  When I followed her, she disappeared into this mess of blackberry vines and dead grass.  It was impassible.  We had to cut our way into it.  There was a big metal frame thing in there that was making it worse. 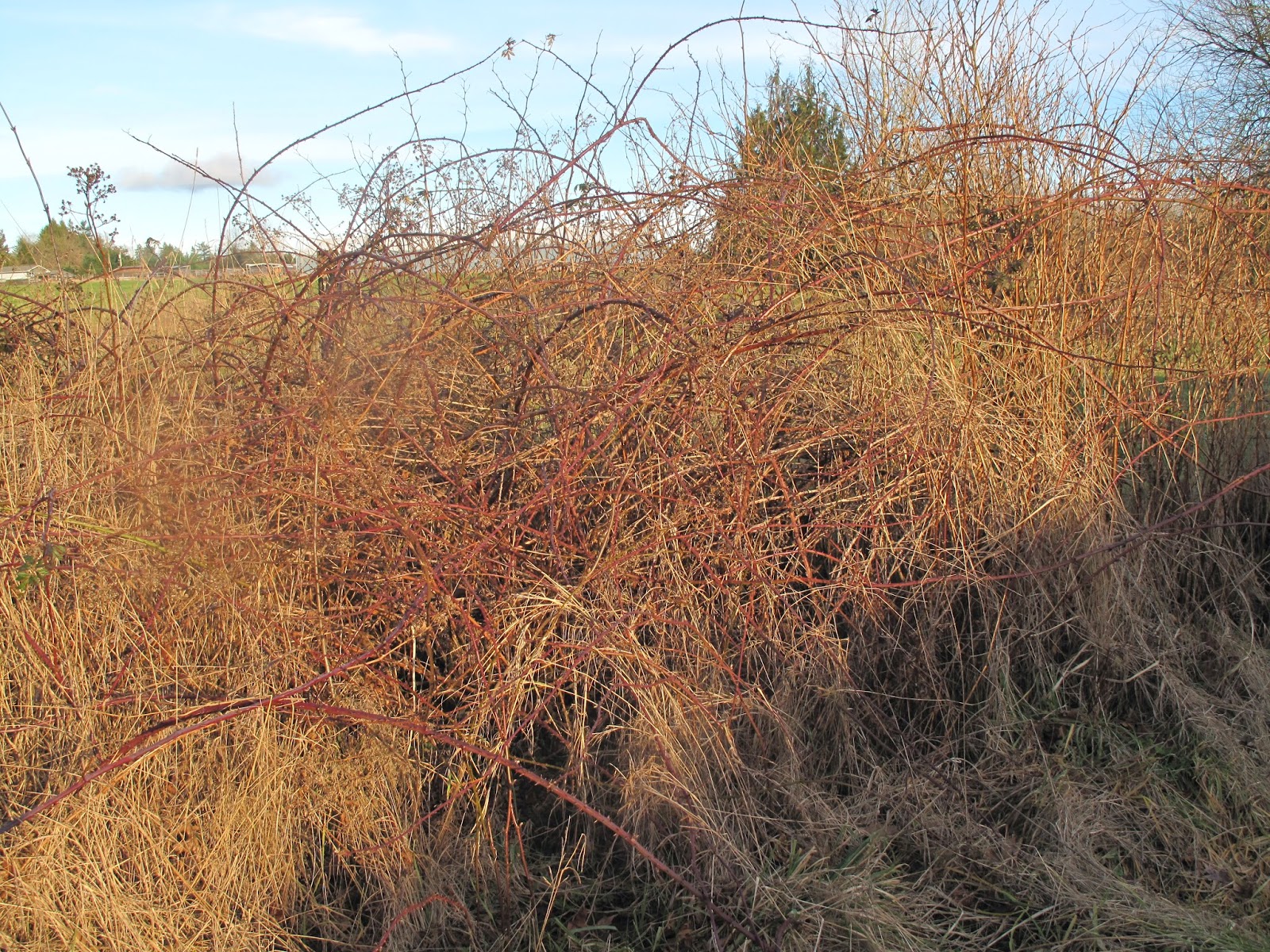 We finally got the vines cut back enough that we could drag the frame out.
Getting closer. 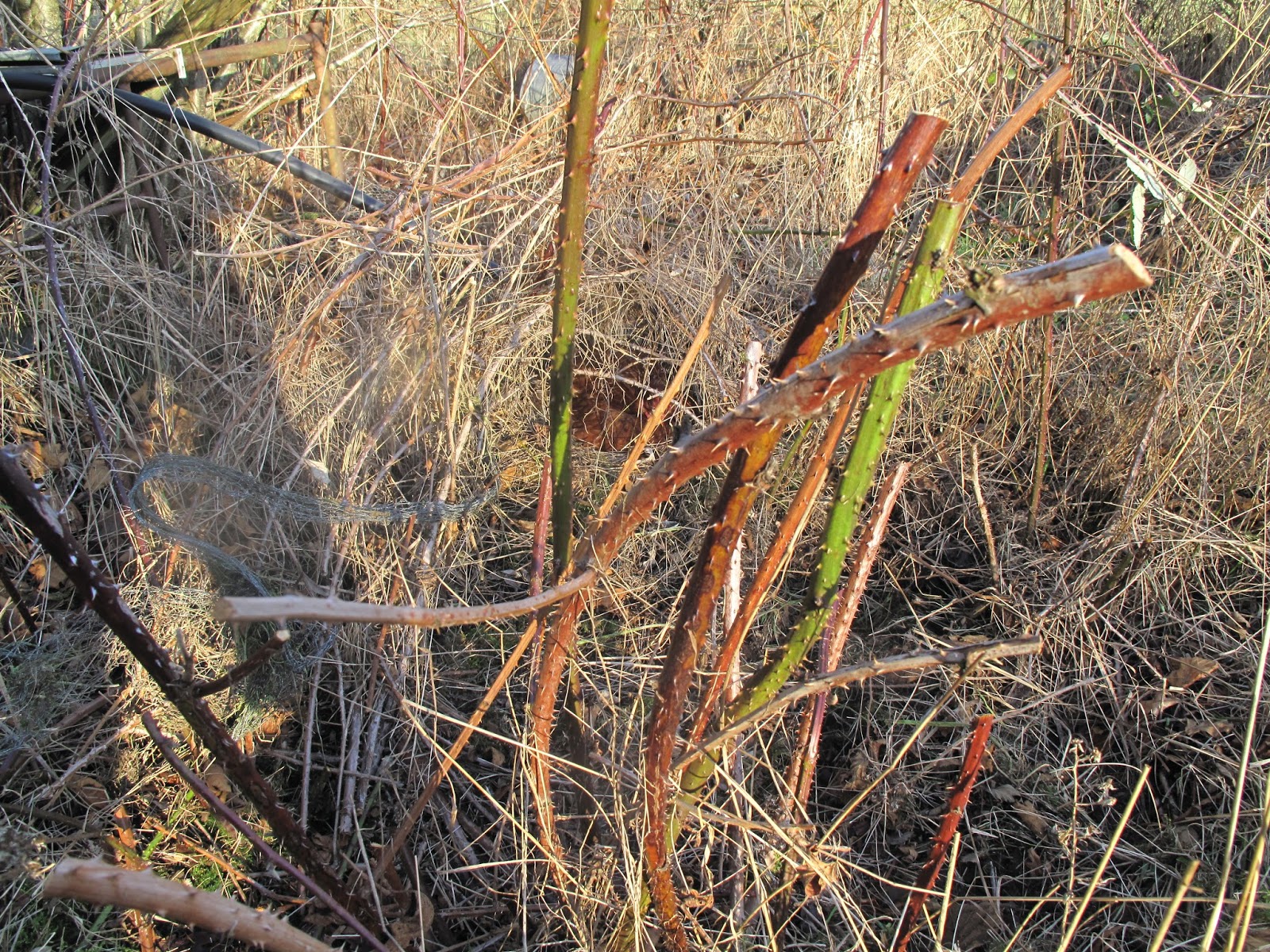 And there she was, sat on a whole bunch of eggs, more than a dozen, I can't remember the exact number.  So we left her there.  We put something over the nest to keep her dry, and then that was when we went to Oliver.  When we came back she had abandoned the nest, she had probably figured out by then that all the eggs were duds. 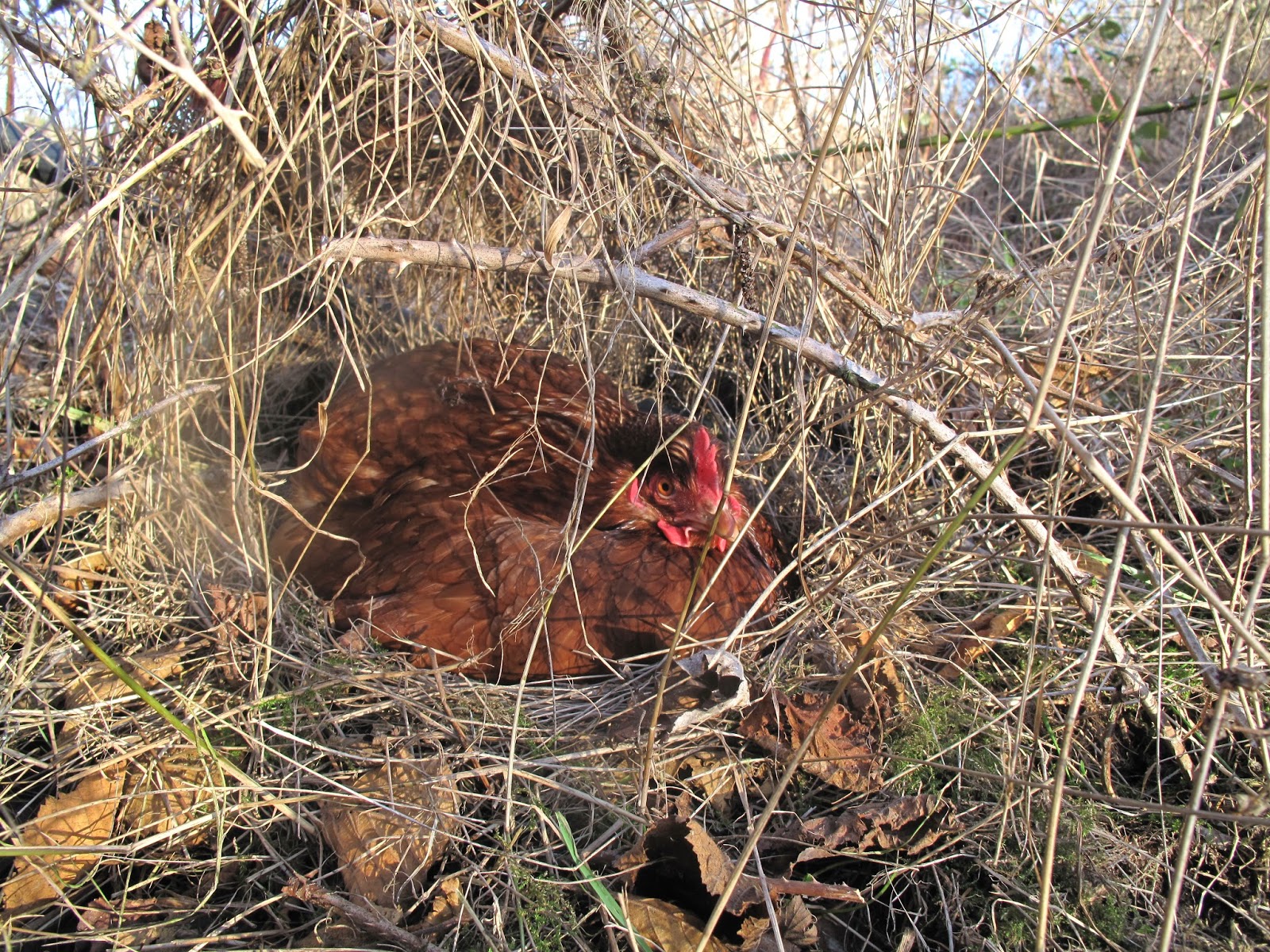 A while ago I saw a couple of hens out behind the barn, right after they had got let out in the morning.  I didn't have time that morning to hang around watching them, and then I didn't see anything again.  Until a couple of mornings ago.  Most likely the same hen.  Up onto the coop roof and over the gate she went.  Then off she headed to almost the same spot as before.  Right next to it in the next pile of brambles and dead grass.  Not so inaccessible this time.  I went back that evening to see how many eggs there were.  The hen was still there.  She is trying to hatch the next clutch of eggs now.  She is sitting on 15 eggs.  Once again I'll put something over to give her some weather protection, and we'll wait three weeks and see what happens.  Not sure why I'm doing this.  Oh little chicks are so cute, but they are also something else that needs looking after, and we are trying to reduce those kind of chores.

And that metal frame that was over the first clutch of eggs....well it was the stand for an old fuel tank that we inherited with the property.  I'm kind of excited about that.  We've carried it down to the garden and I'm going to put some wire around it and it will make the perfect frame for pole beans to climb up.  Heavy and stable enough to not fall over, and easily portable so the beans can be planted in a different place each year. 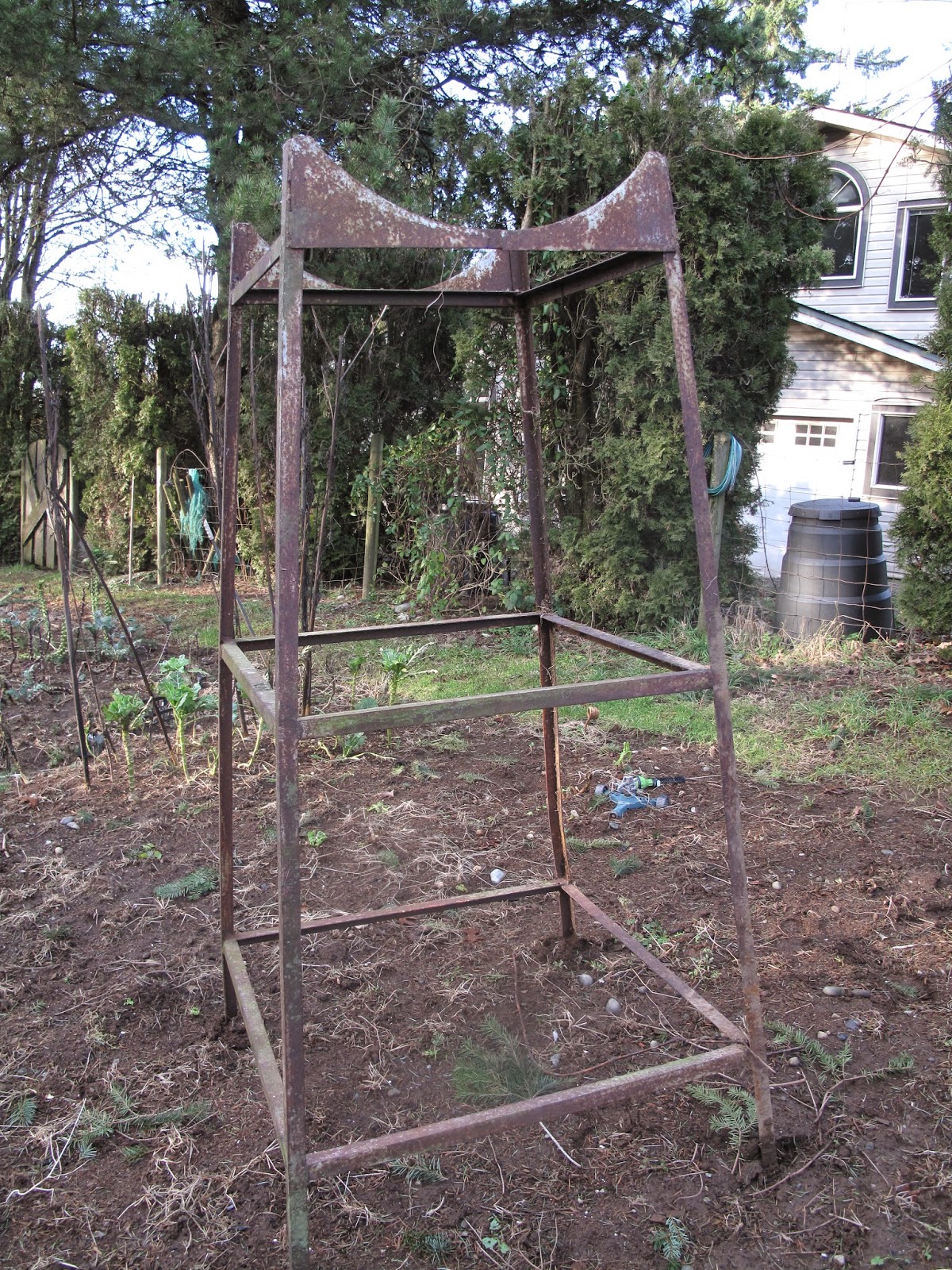