The things we do for our dogs.

The other day I was in Thrifty Foods. I already knew that some of their organ meats (for the dogs) were cheaper than other places I shop, so if I am in White Rock and am out shopping with my mother, I make a point to pick up a few more packages. 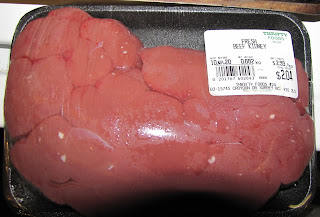 I am always on the lookout for variety, and was really excited when I found some bags of fish trim. They worked out to $1.77 lb, which is fits in my guidelines of trying to find meat for $2 or less. The best I have done so far is to get whole turkeys and chicken legs for $1.00 lb. 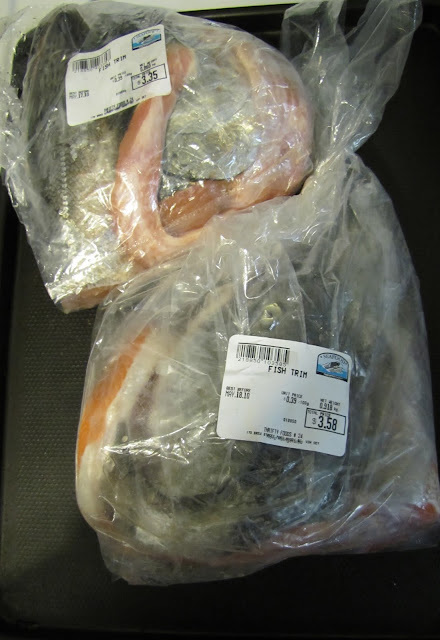 When I was going through the checkout, the cashier asked if I wanted the fish bagged seperately from the meat.  I said no, it was just for the dogs.  So she asked if I cooked it.  I said no, they get it raw.  Even the fish heads? she asked.  Oh yes I said, and smiled to myself at the look on her face.  She asked what kind of dogs I had.  I wondered if she was expecting me to say a wolf cross or something similar.  I smiled again and said two border collies and a lab.  I left her thinking about that one:)
Two of the packages of fish looked like sockeye, really I am just guessing, as it was a very orangey meat, and the other one was a bit lighter.  I hope it wasn't one of those farmed salmon, but that was the biggest head of all, and I don't think the farmed fish are allowed to grow as big as that one.


Fresh raw salmon can have dire consequences when fed to dogs, so it must be frozen first.  Read about that here  So I spread the salmon out on trays so that the pieces would be frozen individually.  That way I can just pull a piece out of the bag later without have to thaw the whole lot.  You would get kind of a shock right now if you lifted the lid of one of our freezers! 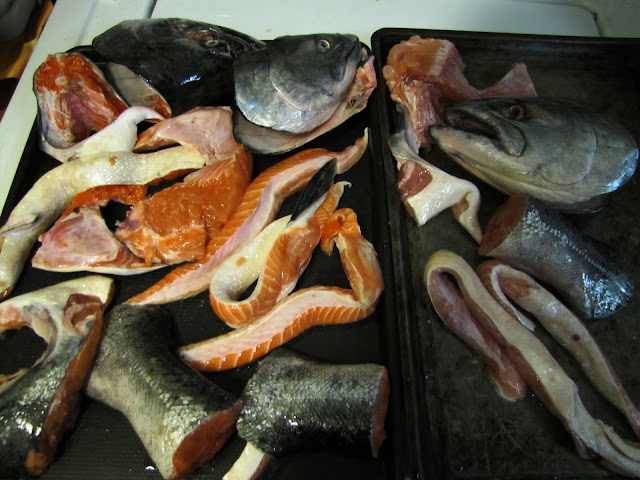 I took one of the packages of kidney and diced it up and spread it on a cookie sheet to make training treats.  I cook it slowly in a 250-275 degree oven until it is very dry and firm.  It gets firmer as it cools, so you have to be careful not too cook it until it is too hard.  I like it when it is firm and dry, but I can still break it into even smaller pieces if I need to. 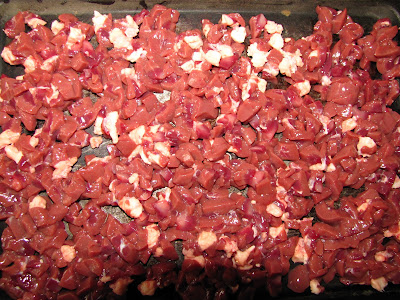 Unfortunately I got a bit distracted and left the kidney in too long, and it got harder than I would have liked.  There was a fair bit of fat left in the bottom of the pan, so I rubbed some plain cheerios around in that and added them to the mix.  Into little baggies they went, and into the freezer to be grabbed when needed. 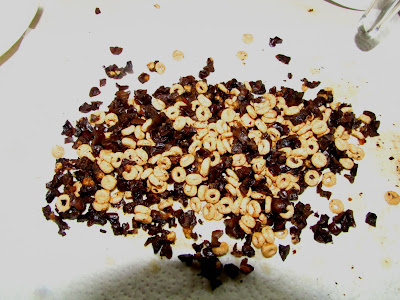 So for just over $2 and a bit of time, the dogs have some healthy treats.  Oh yeah, if anyone has any 'old' or freezer burnt meat in their freezer that they want rid of, just let me know:)
And speaking of getting distracted, I forgot to turn a pot of marmalade down before I went outside this morning, and when I came back inside it had boiled dry and was burning on the bottom of the pot.  You know, I can see myself in my mind's eye turning that dial down, but obviously it was just my imagination.  Sure was frustrating, when I think of the time it took to juice and chop those oranges.  The joys (not) of aging:(
Posted by Karen at 7:58 AM