Much to our disgust, a week or two ago we discovered that our little travel trailer had been invaded by mice.  I happened to be in there looking for something one day, pulled open a drawer, and well, let's just say it was disgusting.
So we pulled everything out.  Anything that could be was thrown in the washer, and the rest was vaccuumed and washed down.
We decided that the mice had climbed up the fat electrical cord and through the little hole where it exited the trailer.  From there they had been into everything they could.  Always trying to look on the bright side, I was just thankful that they hadn't nested in the seat cushions or the mattress.  There was a lovely nest in the oven though.  That's certainly a good reason to give the oven a really good cleaning, and there was no way I was touching that nest.  Poor Larry got to do most of the dirty work.
Most things we didn't put back in the trailer, and we kept watch, just in case.  There was the odd dropping or two showing up overnight, so obviously we still had at least one visitor.
Since we didn't have any mousetraps on hand, and I kept forgetting to get some when I was out, I looked on the internet for an idea, and found this.  It is just a large bucket with a dowel jammed across the top, a can that spins on the dowel, and peanut butter on the can.  The idea is that you give the mice access to the top of the bucket, with a ramp or whatever, they climb out to the can for the peanut butter, and their weight to one side or the other makes the can spin and dumps them in the bucket. I even watched a video on Youtube and saw it in action.  Usually you put water in the bucket, and the mice swim until they drown of exhaustion.  Well I guess I have a soft spot, so just put enough water in the bottom to make it hard to climb out, but not enough to drown in.  We had a few days with no success, but then yesterday morning, Hurray!!
Do I smell peanut butter? 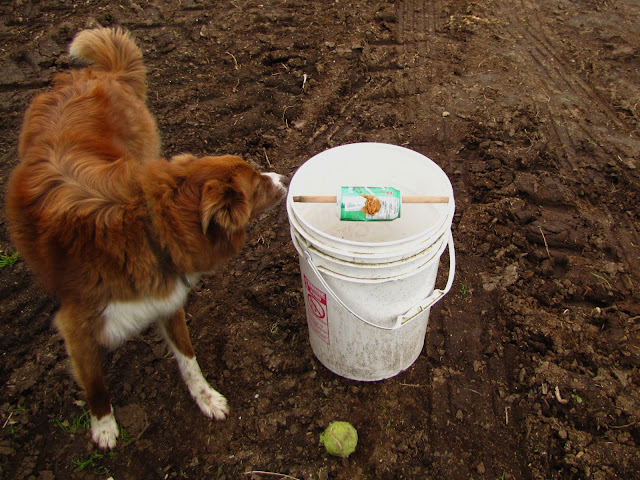 And here's the little bugger 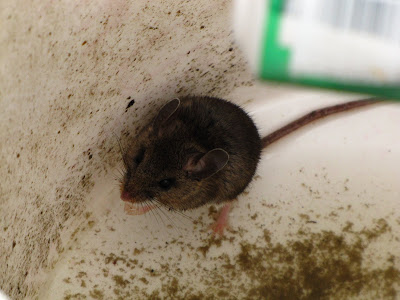 And off to be released into the 'jungle' 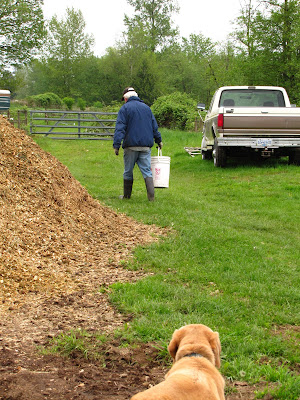 Meanwhile I was cleaning out the south chicken coop.  We had got a call on Tuesday to say that the 60 pullets we had ordered were ready for pickup on Friday.  I had been meaning to phone the hatchery all month to get an idea as to when they would be ready, but kept forgetting. You never get much warning from them, and I usually like to keep the hens we already have as long as possible.  In fact, by this point I had given up on the idea that we were even going to be getting the new ones in April.  So we had a couple of days to try 'rehome' some of the old hens.  My ad on Craiglist generated three replies, but none of them panned out.  We had to move all the hens from the south coop to the north coop, to join the ones already there.  It was rather crowded in there, but there wasn't much else we could do.  So yesterday morning I cleaned out the south coop, and then powerwashed it and all the perches and the nest boxes, while Larry headed off for a load of feed.
After lunch we headed to Echo hatchery out by the airport to pick up the pullets.  The back of the truck was filled with cages and dog crates full of hens.  Luna was absolutely fascinated, and I wish the photos showed her intensity. 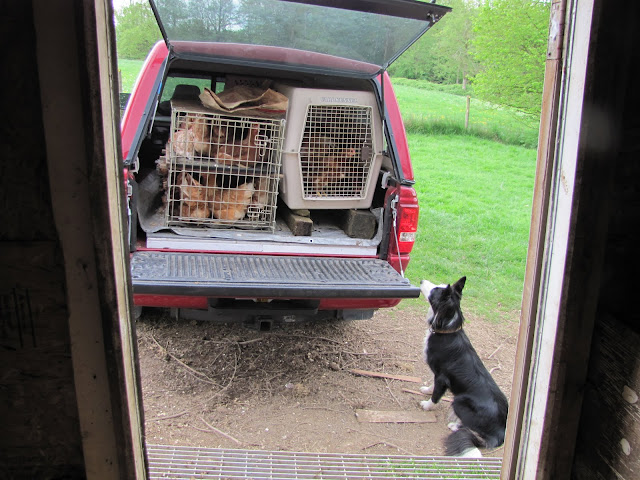 She supervised every move 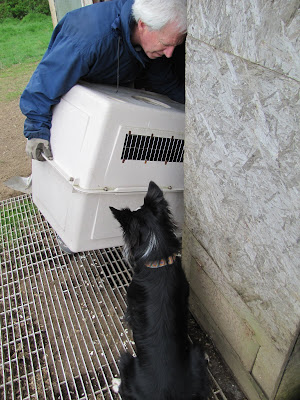 You'd think you could just tip them out of the crate, but no....
They just keep flapping their wings and trying to go uphill, so you can get half of them out by tipping the crate, and the rest you have to drag out. 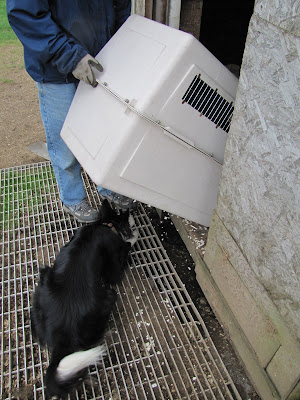 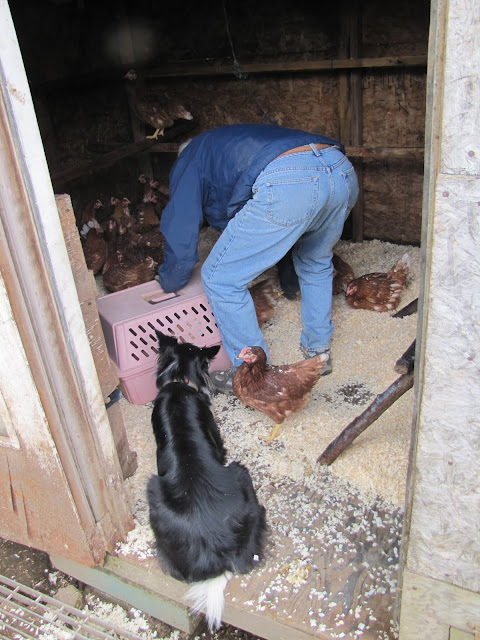 All settled in, and a bit more relaxed now 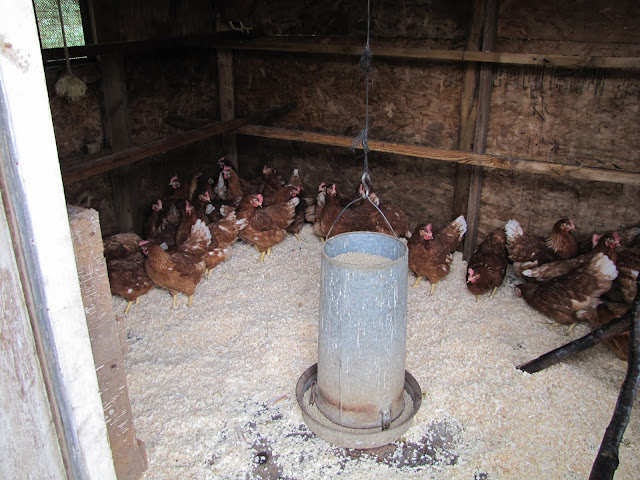 And today, the brave ones got their first taste of real freedom, as the little rooster escorts them around. 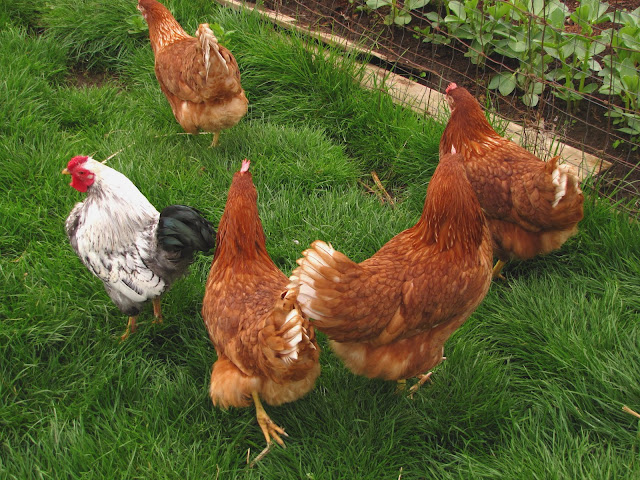 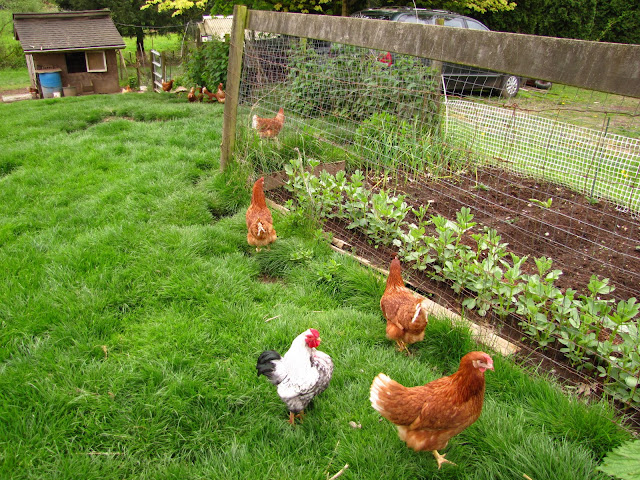