So the Olympics are here in Vancouver/Whistler.  Not that we were terribly enthusiastic when it was first announced they were coming, and no mad rush to buy tickets for any events.  Maybe I am cheap, but those prices just seem way too high to me.  But, that said, we have always enjoyed following the games on TV.  So, since they were so close to home, I knew I would regret it if we didn't get a taste of what all the fuss was about.
We are basically country bumpkins, and head into Vancouver very rarely.  Just can't take all that traffic, trying to find parking, and actually having to PAY for parking, well we just aren't used to doing much of that.
So, Thursday last week, we drove to Surrey, and had our first struggle with parking.  The skytrain lot was full, and after stalking a few people getting off the skytrain, to see if they would lead us to a spot in the parking lot that we could inherit, we gave up.  So then we drove around the neighbourhood.  Cars were parked for quite a distance down Fraser Hwy, but we finally found a free spot on a patch of grass that a construction crew had taken over.
No problem getting on the skytrain, and off we went.  We exited at the Main station, and were greeted outside the station with a Russian choir. 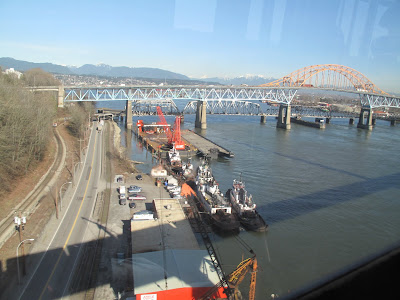 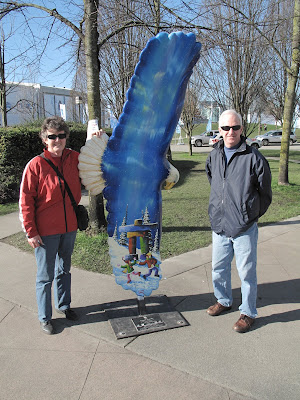 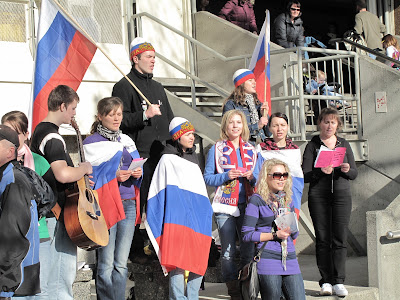 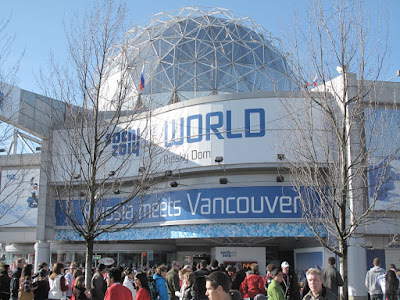 The Russian pavilion was at Science World.  The lineup was huge, hours long,  and as well as trying to avoid having to pay for parking, we also don't really 'do' lineups 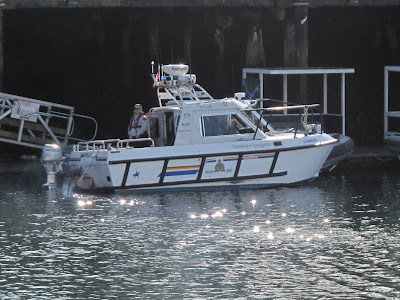 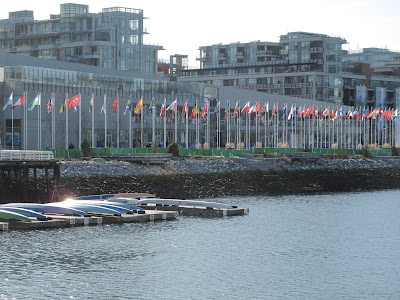 Across False Creek was the Olympic Village, which of course was off limits to the likes of us.  The police presence was very obvious.

We wandered around, and then headed to the south side of False Creek and walked along (which turned out to be much farther than I thought it was) to get to the Olympic Line train.  Another huge lineup, but after watching for a few minutes, realized that they could cram an awful lot of people onto one train, so got in the line and into the next train.  I think Vancouver would be foolish to not keep this train running, and expand the line.  Why spend 8 million, or whatever the number was, and then not continue to use the track?  It was a quiet enjoyable ride.  A little freaky though to look down the track (we were up the at the front and were basically looking over the driver's shoulder) and see another train on the same track, heading right at us.  Thankfully there was a small stretch of double track that one train pulled into to let the other train by. 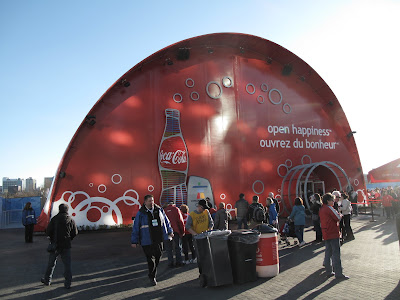 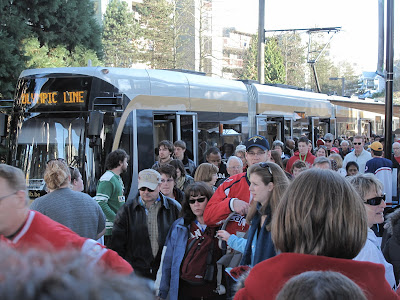 We did line up for the Yaletown Livesite.  There was airport type security to get in, which was what was slowing things down.  We watched some curling on the big screen, went into the Samsung and Acer pavilions.  The Samsung was a waste of time, and the Acer, well we weren't too much into playing computer games, so didn't stick around in there.   A huge lineup for the Coke pavilion, so skipped that one.

Next we wandered up the streets.  Several were closed to vehicular traffic, and were crowded with lots of people in hockey jerseys, or whatever red clothing they happened to own.  A men's hockey game was on at the time, so as we walked past restaurants, all we could see were hockey jerseys and tv screens. 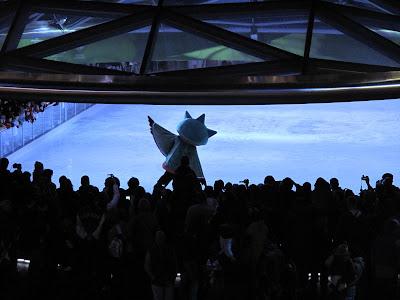 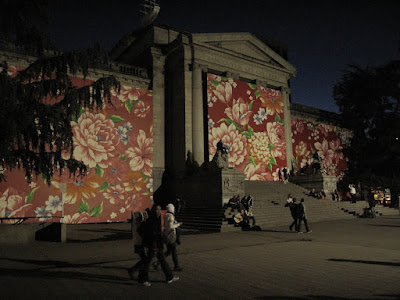 We made our way to Robson Square.  It was dark by this time.  There was a show on in the ice rink, and of course a huge crowd surrounded it.  The front of the art gallery was draped in 'flowers'.  Not sure the reason for that, maybe something to do with Chinese new year?  The art gallery was offering free admission for the Olympics, but of course by this time was closed.
After wandering for a while, we made our way back to the Skytrain, and to our lonely car sitting on the grass back in Surrey.
I think another trip will be in the works. 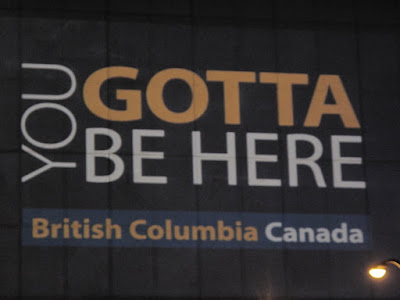