Marmalade oranges, also known as Seville or sour oranges, are only in season for about a couple of months at the beginning of the year.  Sooo, I have to make a wild guess at how much of this marmalade I am going to need in the year, and buy enough oranges to fill the bill.  I usually only buy enough at a time to make two or three batches.  I am one of those people that are great at buying things, and not always so great at doing something with the things when I actually have them.  So I like to get the oranges for those two or three batches prepared, before I buy more.  I do have to keep in mind though that the season is only short.  So then I start to panic and worry that it will be over before I have prepared enough, so sometimes end up with quite a few bags of oranges in the fridge.  They keep for quite a long time in the fridge, but even so, I have left them long enough that I have actually had to throw them out.  Here's a link with all sorts of information about the oranges.
http://www.hort.purdue.edu/newcrop/morton/sour_orange.html 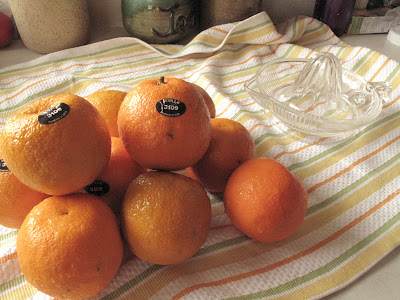 I start with 10 oranges, which is about 3 lbs.
They are juiced 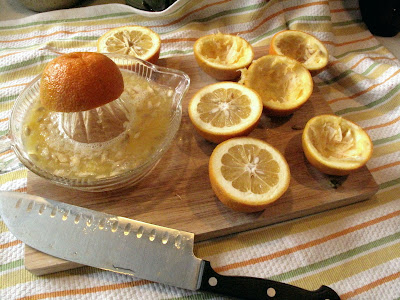 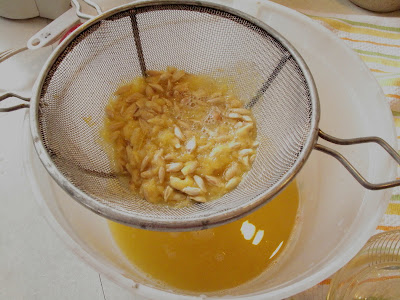 The pith is cleaned out.  A grapefruit spoon that has a serrated tip works great for this.  You just run it around the inside of the peel and everything comes out in one piece 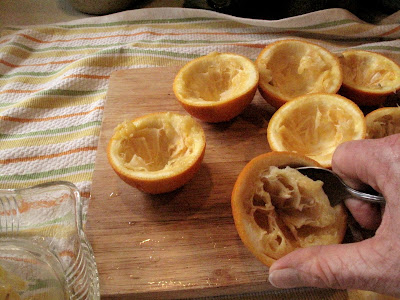 The pith is added to the seeds and contained in a cheese cloth bag.  This all contains pectin, which helps the marmalade to set. 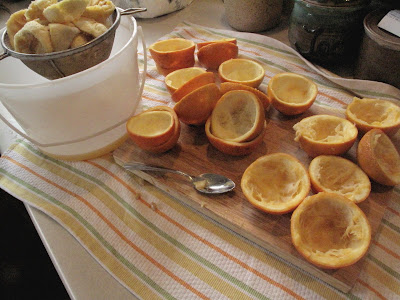 The peel is chopped by hand.  I always laugh the odd time I am asked if it is 'fine cut' or 'chunky cut'.  I tell them it is 'Karen cut'.  Probably more chunky than fine.  Looks so much nicer in the jar when it is hand cut, compared to the peel being grated. 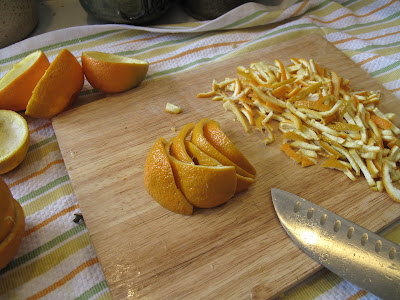 The juice, sliced peel, water and the cheese cloth bag are boiled until the peel is tender.  The sugar is added and it is boiled again until the setting point is reached.  Determining the setting point doesn't seem to be a very exact art.  I was using a thermometer, but even though the marmalade reaches the right temperature, it seems it is not always guaranteed to set.  Lately I have been using the 'blob on the cold plate' method, and so far so good, although I seem to have to boil it longer that way, which can make the colour of the marmalade darker. 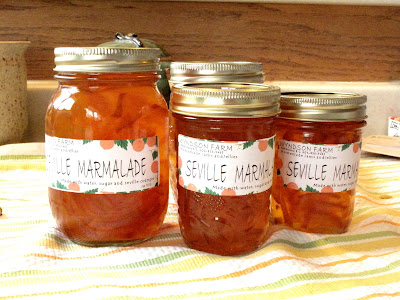 Nothing more frustrating than going to all that work and then ending up with 20 jars of marmalade that refuse to set.  It has happened many more times than I would like.
You have to admit though, it looks lovely in the jar.
Posted by Karen at 10:46 PM