After finding the hole under the fence to the south chicken field, we both spent about 3 hours on Thursday fixing things up.  The hole was dug under the fence under that hazelnut tree that straddles the fence in the center of the picture.  The coyotes prefer to dig in a hidden spot.  We cut some short lengths of that fencing you can see in the photo, attached it to the bottom of the fence, laid it horizontal along the ground, and fastened it down. 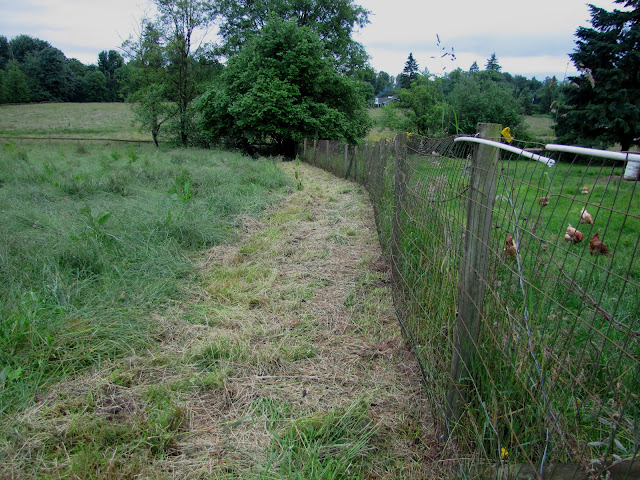 The fence from the tree to the gate where the picture was taken from was in pretty bad shape.  Over the 25 years we have been here, horses had put a lot of pressure on the fence and it was low and sagging.  Not that we'd been aware of a coyote ever jumping over it, although Luna uses that as an exit if she doesn't want to wait for the gate to be opened.  In actual fact, the coyotes aren't even supposed to have access to that fence.  It means they've got through the fence on the other side of the hayfield as well.  That will be a fencing job for the Fall probably, when the jungle has died back and we can actually see what is going on out there.
The original fencing was what is called farm fencing around here. 47" tall, with vertical wires 6" apart, and the horizontal wires creating spaces about 3" tall at the bottom and increasing to 6" at the top.

Good enough to keep all but the most determined hens in, but unfortunately, there are always a few determined ones in the flock.  So then I took a 4' tall roll of stucco wire, (stronger than chicken wire) which has 2" square holes, cut it in half, and added that to the bottom 2' of the fence. Even the most determined hen can't force it's body through a 2" hole.  It's all good until you add a horse into the mix.  Without a good tight top wire or two, or an electric wire, the urge to lean over the fence where the grass is always greener on the other side, it just too much for any self respecting horse to pass up. 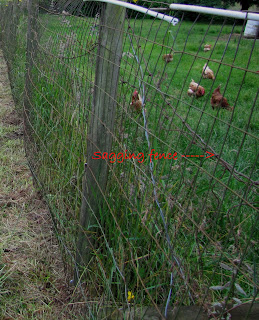 We did have an electric wire for a while, but eventually over the years the fence was pushed down, the bottom stepped on, and the ground has claimed the bottom part of the fence.  Therefore we left the old fence up, since in this stretch we had a built in barrier to stop any digging under, and just added the 'new' fence on the other side of the post.
Larry mowed a strip with the tractor as close as he could get to the fence, and then I went along with the weadeater and finished off the job so that we could get the wire right down to the ground, and snug against the posts.  It is 4' tall with 2x4" openings.  I stuck those two white markers at the top corner, where Luna would jump over, to make it more obvious to her that things had changed.

Things will probably go quiet on the coyote front for a little while, but that's just because they are calling a few meetings and planning a different strategy.
Posted by Karen at 12:39 PM