The Cost of Doing Business

I'd agonized for quite a while about raising the price of the eggs that we sell at the farmers market.  One minute I'd think that we should just leave them as they are, and then next minute I could easily justify raising the price. Of course it didn't help that the vendor next to us at the market is easily selling her eggs for a dollar more a dozen.  Ideally the price hike would have been made at the beginning of the season.  Unfortunately the timing of getting the new hens wasn't good, so that meant we had lots of smaller eggs when the markets started, so it didn't seem right to be charging more for those eggs.  So I rehashed it all again, and finally decided to put the price up to $4.50 from $4.00 on July 1st.  The new eggs are up to size now, and that gave me two or three weeks to give our customers fair warning.  After all, minimum wage has gone up a couple of dollars in the last little while, and that would easily account for us putting the price up 50 cents. 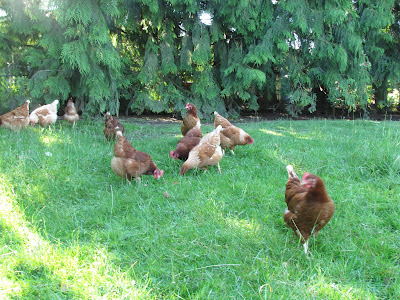 After Monday, I felt like charging $10 a dozen.  We had a bunch of panicky hens in the south field, but couldn't figure out what was bothering them.  We let Jake and Luna in there, and they were concentrating on the fence between the chicken field and the hay field.  Both very obviously air scenting, so I was wondering if a coyote had been in there on the other side of the fence.  Let the dogs into the hay field, and Jake especially raced around and ended up at the other side, and by his actions seemed to indicate there was something down in the 'Hole'.  The grass is so long in the hay field that it was hard to even figure out where Jake was at one point.  Anyway, we didn't let the dogs into the Hole to check things out, I was too worried about them getting hurt by whatever it was they could smell.


Later in the afternoon there were panicky sounds coming from the north field.  Sounded like something had got a chicken.  So out the door we raced again, and into that field.  This time there was a big patch of feathers, and then when we searched around, we found a big hole dug right under the fence, and feathers on the other side as well.  Damn coyotes.  Larry got to work hacking all the blackberry vines that were growing over the fence and concealing the area where the hole was dug.  I looked along the fence by the road on the west side.  The ground is very uneven along there, and in the 25 years that fence has been there, the pressure of the stretched fence wire has gradually pulled the fence posts up out of the ground a little bit.    I asked David to help me.  I took out the top two fence staples holding the fence to the post.  That way we were able to slip the post pounder over each  post, and bang it back down so that the bottom wire of the fence was right down to the ground.  The ground on the other side of the fence is all weadeated short, so it's not the spot a coyote would pick to dig, as it's too open and exposed.  In the meantime Larry had cleared all the over hanging blackberries and found something to plug up the hole under the fence.  Then we struggled to force the pile of blackberry cuttings over the fence and down to the bottom so that the clearer spot in the ditch, under the vines and right on the other side of the fence, is now plugged up with a whole bunch of cut off blackberry vines. 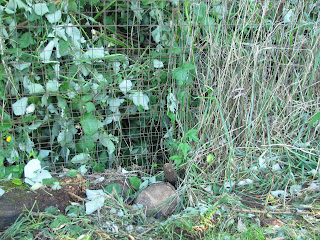 Hopefully that is enough to discourage the coyotes from attempting another hole.  They might not right away, but I can guarantee you that they'll have another try eventually.  http://wyndsonfarm.blogspot.ca/2010/01/coyote-troubles.html

When we started the job, there was a coyote, in the field to the north, laying on top of one of those big marshmallow round bales of hay, watching us.  I ran up the field and it left in a hurry.
And after that unplanned hour and a half of physical labour, I thought those eggs were a steal at twice the price.
Wednesday's update -  Jake continued to bark throughout the day today, looking into the south chicken field, but we could never see anything.  I came home this evening to Larry telling me that there was a hole under the fence from the hay field, where the dogs had been air scenting the other day.  There was a small patch of feathers in the field, so we are not quite sure if the coyote was interrupted by Jake, and the chicken escaped, or if the coyote carried it off.  More fence work to do.  So tonight after all the hens were in the coop, I went out and counted them.  We've already lost three of the new hens from the north field. We've only had them about seven weeks.  The hens in the south field are down by three as well, which is actually pretty good, since we've  had them for more than a year now.  Don't know when those losses occurred.  I'll look tomorrow and see if I notice a hen that looks to be missing a bunch of feathers. Hopefully the coyote dropped his order as he rushed out of the restaurant.
Posted by Karen at 10:43 PM