We have made some progress on The Great Deck Project in the past couple of days.  The covering for the deck was bought and brought home yesterday.  I walked away when Larry was going through the check-out.  I decided I'd rather not see what the total $$$$ came to.
So now all the plywood is on.  Of course it has taken three times longer than I thought.  We came across bits of rot in some of the joists where the plywood had rotted at the seams, so that all had to be fixed.
Yesterday I decided I was going to sand all the fascia boards so that they could be painted.   Weathered boards, coated in peeling paint and green algae.  I tried the little 1/4 sheet sander, but after a couple of seconds the paper kept coming off.  I tried a sanding block, which was useless.  So then I was trying to think of what else I could use.  I thought of this wire brush thing that fit into the drill.  After spending a lot of time looking for it, I finally found it, but it was rather worn down.  David happened to come home at that point, so I asked him if he had anything like that.  He did, but he said it only fit on his grinder.  So he got it all set up for me.  He suggested I wear the face mask, as the little wire bristles have a tendency to fly out.  I did pick one out of my upper arm later.  Funny, didn't even know it was there, just happened to brush it with my hand.  Kind of like an acupuncture needle I guess.
All dressed for battle 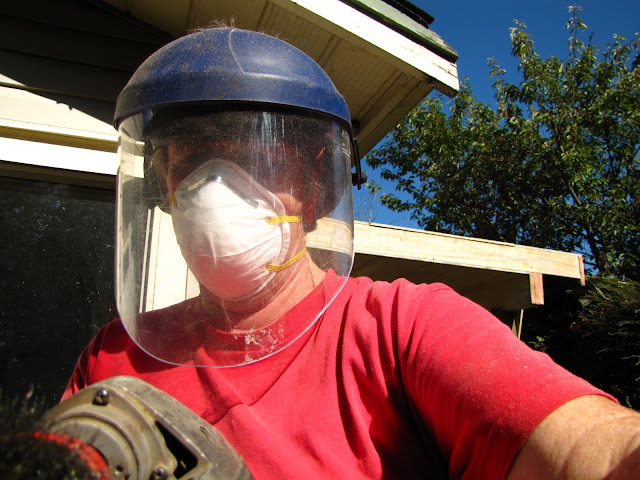 And my weapon of choice 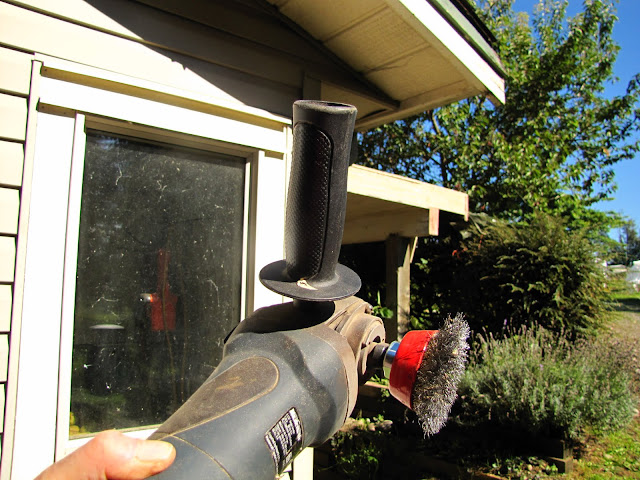 It worked like a hot damn!
So well in fact that I am eyeing up other things that I'd like to paint 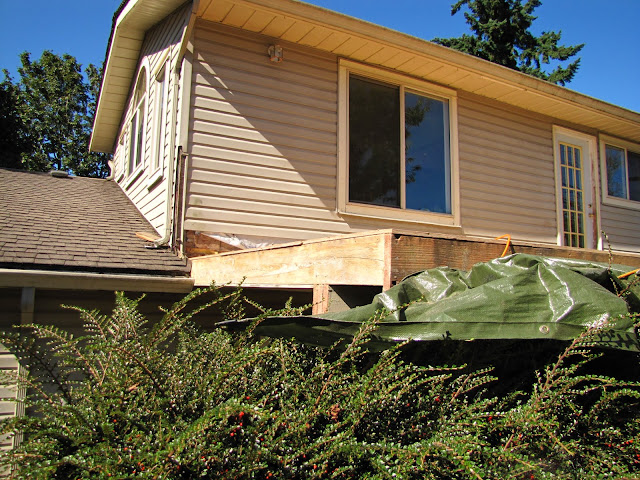 (I just can't help noticing how incredibly blue that sky looks!  No editing was done)
In the afternoon I was putting the new paint on.  Roller in one hand, and holding the roller tray with the other.   I guess I can only concentrate on one hand at a time.  Twice, I let the tray tip without realizing it, and paint was pouring out one corner all over the paving stones below.  A lot of water and a scrub brush took care of that.  The second time, (I must be a slow learner), the paint happened to pour all over my pant leg, and then onto the paving stones.  Good grief:(
At one point, the five foot deep piece of deck between the back door and the stairs to the patio was just open joists with a narrow strip of plywood down the middle to stand on.  Before I could stop her, Luna had hopped across the first gap to the board and then across the next gap to the stairs without a second thought.  Then she came back the same way.  The other day Jake would not cross a 6" gap at the top of the stairs.  Maybe it's all related to the issues he has with the dogwalk.
One coat of paint on the deck edge, and the deck is now all fully tarped over to keep the plywood dry from the rain coming tomorrow, and the next day, and so on, and so on.
Posted by Karen at 11:04 PM