and a Happy New Year!

A bit of an update before the new year starts....

My mother is still in the hospital, although they are thinking about sending her back to the care home any day now.  I told both the social services lady and the therapist all what she used to do on her own before the hip fracture, despite being mostly wheelchair bound, hoping to gain a few more days of therapy for her.  They called on Tuesday, and were going to discuss her case today.  I figure since tomorrow is a holiday, she will be there until at least Friday.  She is still a bit confused about where she is and what happened some days.  Mostly though she seems to be back to 'normal'.

I felt like death warmed over yesterday.  Started as a tickle in my throat on Monday, and then Monday evening I felt pretty crummy.  Yesterday was just awful, pounding headache and upset feeling stomach, and that all over yuk feeling.  Today was about the same in the morning, and then from noon on I have gradually improved and feel so much better this evening.  At first I thought it was the flu, but so many of the flu symptoms seemed to be missing, and it seems like it is over too fast, so I don't know what it was. Horrible while it lasted.

Jake was at the vet on Monday.  On Saturday he was chasing a little stick which broke on impact, and then he yelped and ran back to us.  I was sure he must have a piece of stick in this throat and was all mad at Larry because the 'rule' is that you throw a stick opposite to where the dog is expecting it to go, so that it is dead on the ground before the dog gets to it.  We checked out his mouth and throat and couldn't see any problems, but Jake was 'depressed' for about 6 hours after than.  He came into the kitchen when I cut up an apple, but didn't want to eat the core like he usually does.  I gave him a mushy supper which he ate, and then after that it was a relief to see him pick up at toy and give it to Larry to throw.  I did wonder if there was an issue in his mouth, as he had yelped once one morning while he was eating his breakfast, a couple of weeks ago.  I had made an appointment at the vets for Monday, right at closing time at noon on Saturday.  Then I worried all afternoon that maybe I should find another vet to take him too.  It was a relief to see him back to normal that evening.  So I decided to keep the appointment on Monday and have the vet check out his mouth, and I had also discovered a lump on his chest that I wanted to have checked out too.  Anyway, the vet couldn't see anything wrong in his mouth and said other than a bit of wear, his teeth looked great.  He did think that the upper left canine might be dead, due to the darker colour of it, but since it was not causing any problems, he suggested we leave it alone.  He did a needle biopsy on the lump and said it just contained fat cells, so nothing was done about that either.  We'll just monitor it.

Christmas was quiet, but was nice.    We used to have a sort of tradition of all of us going out to do the animal chores in the morning, and then all go for a walk through the bush with the dogs.  That didn't happen this year,  with both Meredith and David not living at home now.  We also didn't get our Christmas photo taken, which was kind of sad.  Meredith got here first, and then David stopped to see my mum at the hospital, so he was quite late.  Then after we did the gifts, Meredith left to go to the hospital, and by the time she got back we had lost the daylight, and then it just seemed to get forgotten.  In fact the only pictures I took were of the food on the table for Christmas dinner.  Despite being somewhat prepared, there still seems to be rushing around that day to get the meal cooked.  I brined the turkey and it was cooked about an hour and a half before I was expecting it to be done.  I was going to put potatoes in around to roast and found out that the turkey was already cooked.  I couldn't believe it, but tested it with two thermometers and they both said yes, this turkey is done!  We had turkey and stuffing, or maybe we should call it dressing since I just stuff it into a loaf pan, not into the turkey, and then pour turkey juices over it occasionally while it's cooking. Roast potatoes, yam casserole, brussel sprouts, carrots and broccoli, pickled beets, cranberry sauce and gravy.  I'm proud to say that the potatoes, carrots and the tiny, tiny brussel sprouts (it took me forever to peel the outer layers off those little suckers) as well as the beets were all from our garden. 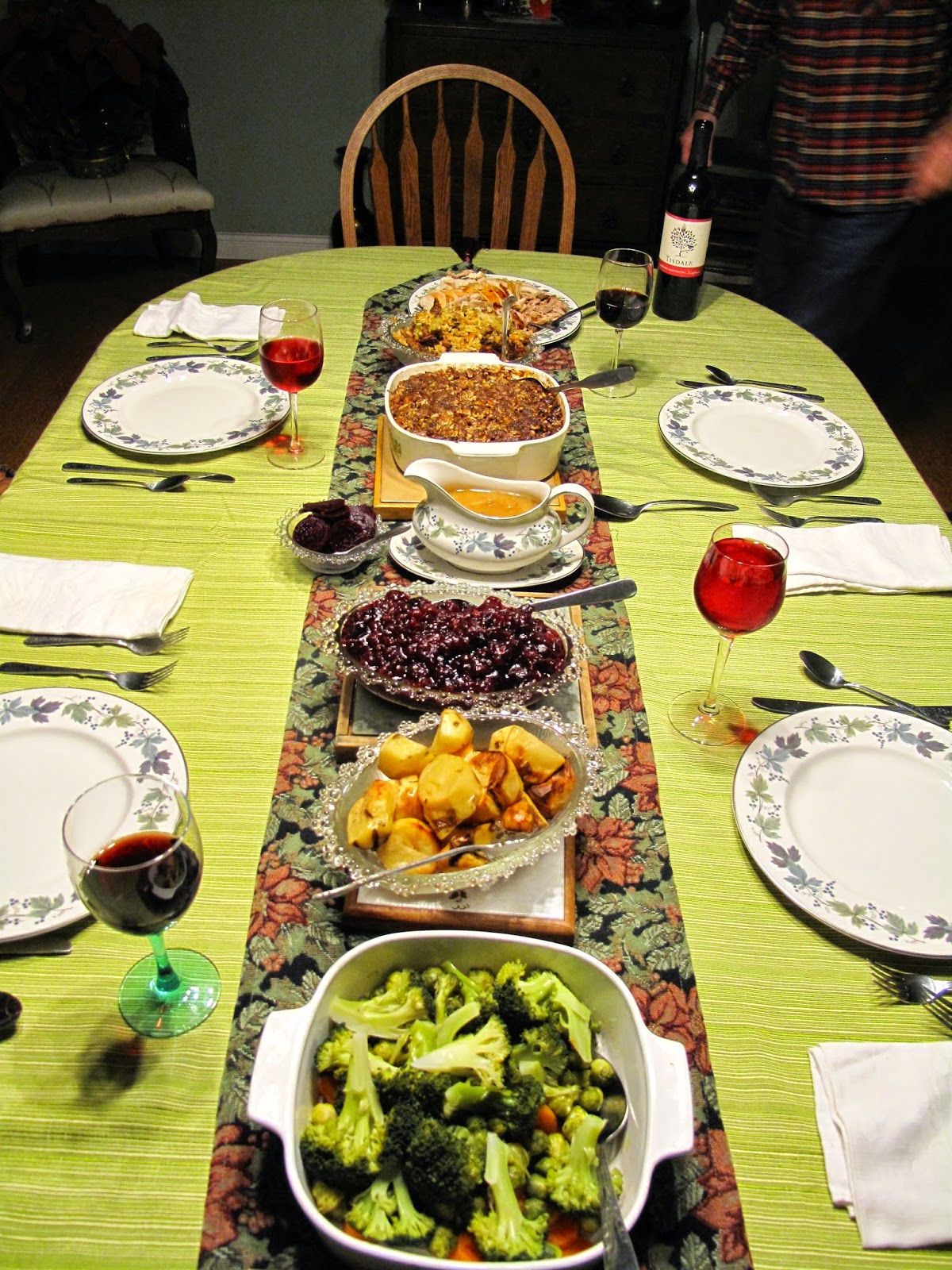 So here we are at the end of another year.  Larry has walked down the road to a get-together at the neighbours.  I'm keeping my germs to myself and didn't feel up to it anyway.  The days are getting longer already and there's a whole new year ahead of us.  I hope it's a good one.
Happy New Year everyone!
Posted by Karen at 10:45 PM