Remember these?  Well I did pick them and they sat in the wheelbarrow for a week or so.  We had a couple of nights were it dipped below freezing, and the big pumpkin got soft and rotten on the bottom.  Before it turned into a mushy mess in the wheelbarrow, I carried over to one of the chicken fields. 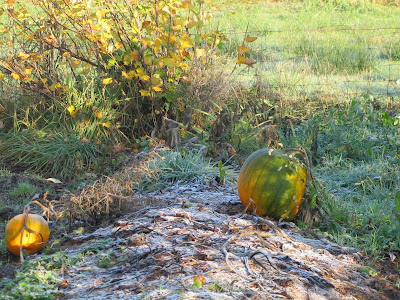 I dropped it from waist height, figuring it would smash on impact, but it actually took some serious rubber boot stomping before I was able to break it open.

I called all the chickens to the party, and they dug right in. Except for the little rooster.  He kind of hung off to the side.  He's really wary and hard to get close to, and maybe he's still feeling embarrassed about his coyote ravaged tail.  It's taking it's time to grow back in. He was actually in the 'wrong' field.  The last few days he seems to have taken a hankering to visit they other hens in the north field.  He just flies up to the top of the fence, throws a few crows out there to let the world know that he a big little tough rooster and he's going to go calling on some other ladies.  Then he flies down to the ground, swaggers across the lawn, throwing out a few more crows along the way, and then flies over the next fence.  Thank goodness the rest can't fly as well as him.  Or maybe it would be a good thing, it would be harder for the coyotes to get them.


Henrietta, you've spilled some pumpkin on your rather generous front porch.
Let me clean it off for you And when the sheep came back to that field late in the afternoon, they finished off what was left of the pumpkin.  Actually, I'd taken most of it out, just left a few pieces for the sheep.  Today when the sheep went out to the hay field, I threw the other half back to the chickens, and then the sheep finished the rest of it off tonight.  I'm thinking I should cook up the smaller pumpkin and make a pumpkin loaf or two.  And if I procrastinate on that long enough, and that pumpkin starts to go all soft as well, you know where it will end up.