Yesterday was Earth Day here in Canada.  We have three fruit trees sitting in pots that I would have like to have got planted, but that didn't happen.
We did do other 'earthy' stuff though.
A while ago we had hired David to clean up a huge blackberry patch that was overtaking the fence line, part of the hay field, and a lane way.  He's a university student that can always use some money.
Today seemed like a good day to get the stuff all burned, so he made a pile in the corner of the hayfield and got the pile going.  Larry and I took the tractor and loaded up some old sunflower stalks, raspberry canes, currant bush trimmings and whatever else we could find and added that to the fire. 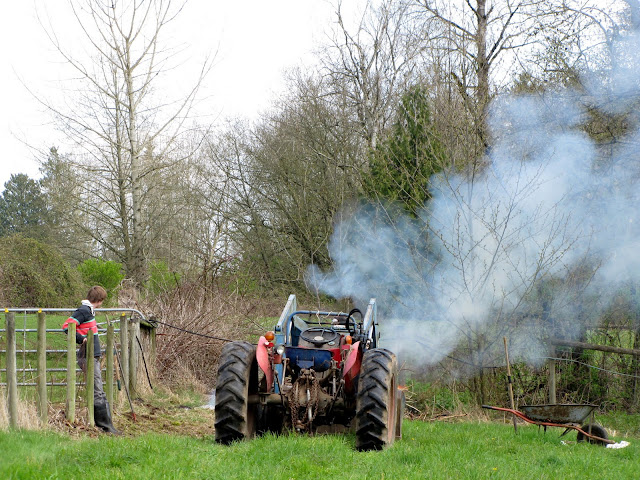 It was a lovely sunny day, and besides getting the pile burned, David kept Jake and Luna well exercised. 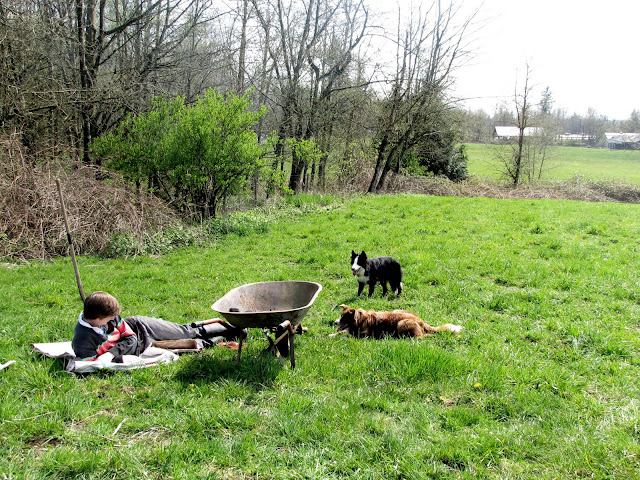 And then, of his own doing, he went and washed the outsides of all the windows in the house!
In this family, he is definitely the tidiest person.
Did I mention he is tall, handsome, intelligent, a hard worker, loves dogs, and is single?:) 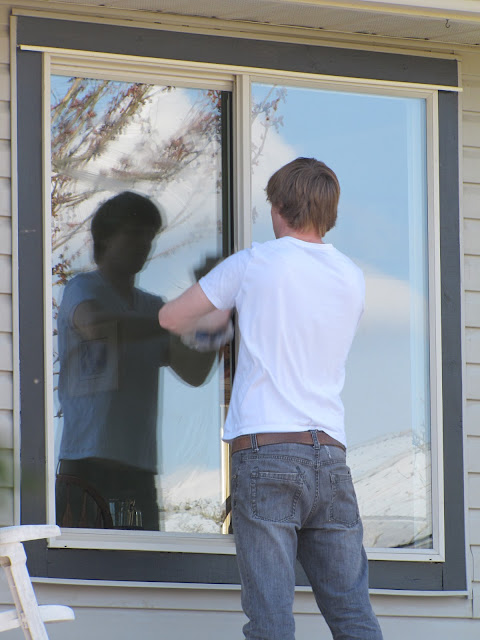 Oh yeah, this isn't an on-line dating site, this is about Earth Day.
So down at the greenhouse, I dug up a couple of clumps of parsley that had seeded itself, and divided it up into pots.  Gotta love stuff that seeds itself!  Parsley doesn't like to be transplanted, so no doubt it will take a bit to recover, but will hopefully grow into some nice plants that I can sell at the market. 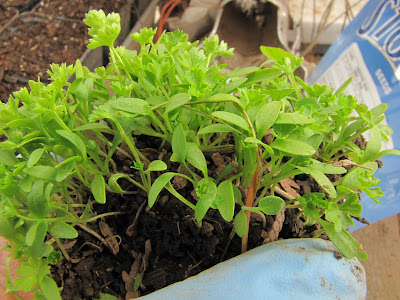 I also seeded some basil.  Those pots are on the left sitting on the waterbed heater.  With some heat, they'll probably germinate in a couple of days. 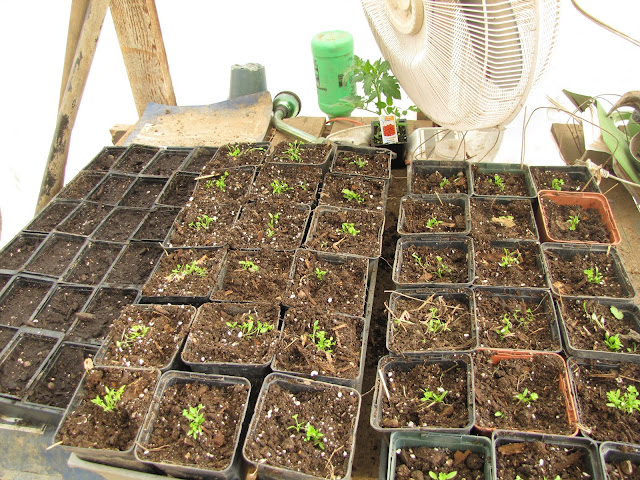 On Thursday I had bought some more tomato seedlings at my favourite greenhouse.  Every year I mean to start some of my own, and then procrastinate so long that it is too late.  So I was at the greenhouse, looking through the flats and flats of tomato plants, and picking out the pots that had more than one plant in them.  There weren't many, but enough for me, and I got quite a few different varieties.  A couple of times I lucked out and got three in a pot:)
I did feel a bit self conscious, as one of the employees was there stocking the tables, and she was asking me if I was finding everything I was looking for. I just smiled and said yes:) 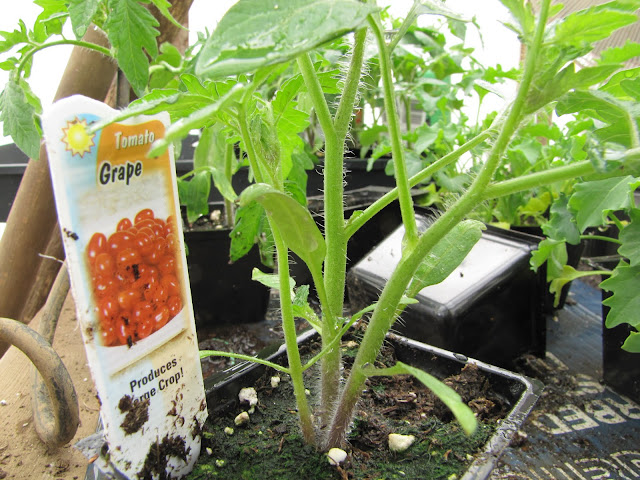 I got them all transplanted (tomatoes handle transplanting very well) and now I have about 40 tomato plants, which is more than enough.
That's the broccoli seedlings in the foreground.  They are taking their sweet time to grow. 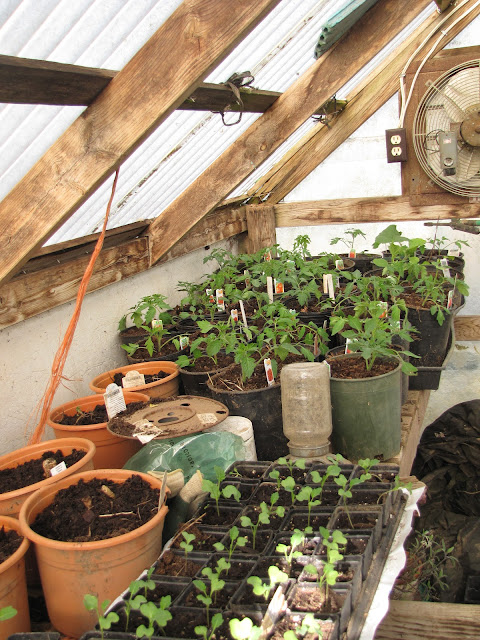 Outside, I transplanted the kale and the cabbages, and then Larry put a hopefully rabbit proof fence around them.
Today we are supposed to be having a one day heat wave, all of 19-20 degrees C (about 67 F), then its back to clouds and showers tomorrow. 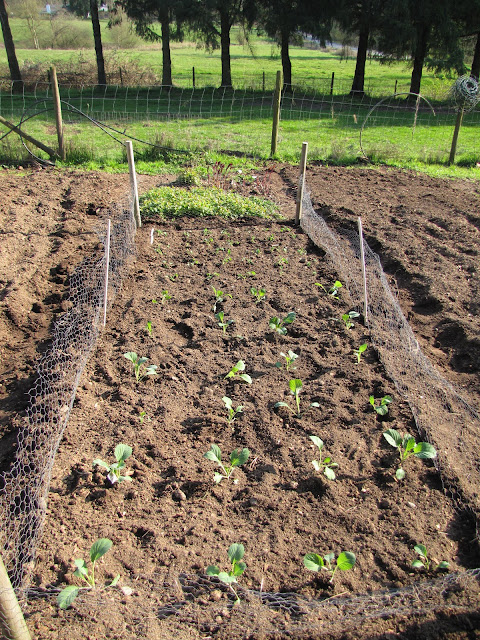 And outside the garden, Luna has already prepared for the heat with a cool hole under the tree. 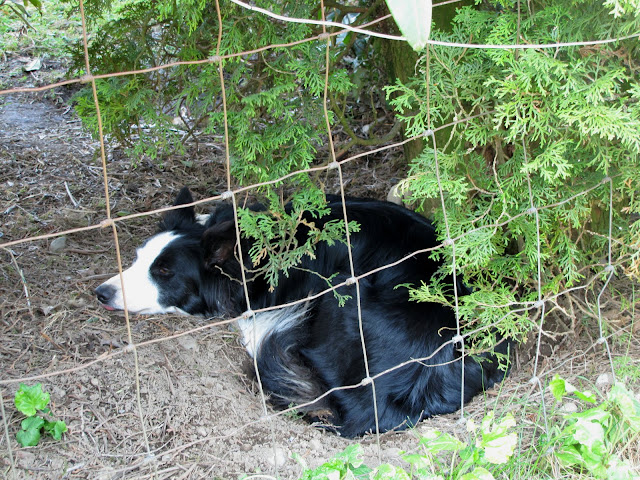 Happy Easter!
Posted by Karen at 7:37 AM