Calli has now been downgraded from Cow bell Calli to Tinkerbell.
Or maybe that's an upgrade.
Remember how we tried that too big, for Calli at least, cowbell hanging off her collar so we could hear her when she took her own route on our bush walk in the morning.  It was very loud, and heavy, and poor Calli was so put out by it that she didn't venture off the trail at all.  That might be a good thing, but we also want her to have some fun out there.
My sister in Ontario said that she had a bell that might do the trick and she included it when she sent some photos to my mother.  Somehow she managed to reuse some stamps that weren't cancelled, so it didn't cost her a thing to mail it.  I was talking to my mother on the phone and she said the bell was there.  I asked her what it was like and she said it was something like what her cat Nelson wore, and then she rang it for me over the phone.  It really sounded feeble and I figured it was too small to be of any use.
Anyway, it eventually was brought home here and we tried it out.
And.... 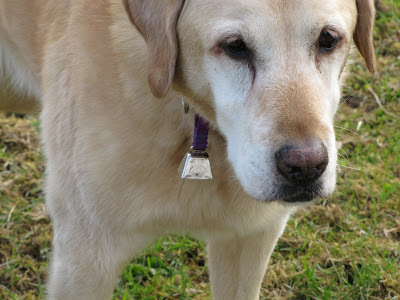 It was a pleasant surprise, and seems perfect for the job. Loud enough that I can hear it out in the bush, and not too loud to be really annoying.  Larry can't hear it very well.  He has a hole in one ear drum and old folks hearing in the other ear.  That's my opinion, as I suffer through the volume that he has the TV turned up to.
Here's a few pictures from our morning walk.
I eat raw, but I'm not sure about eating this thing 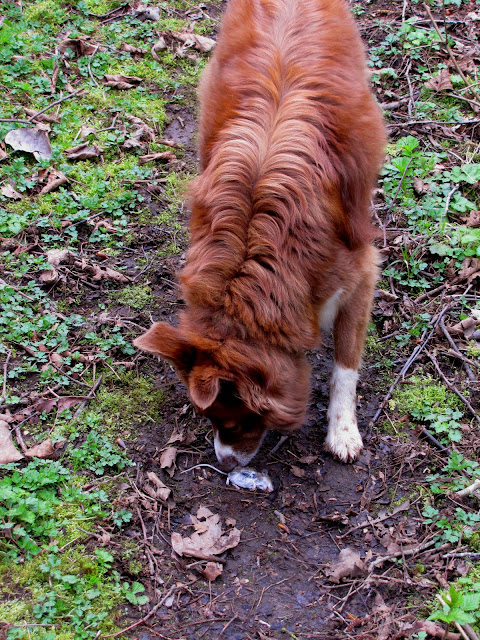 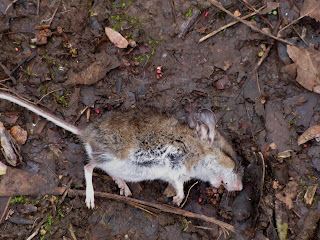 Lots of things are springing to life now.  The salmonberries are blooming 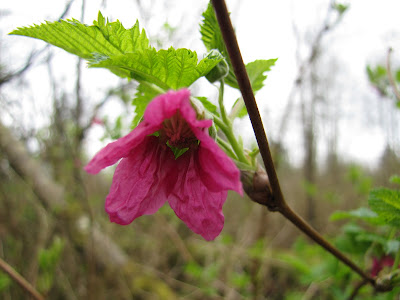 The bleeding hearts as well 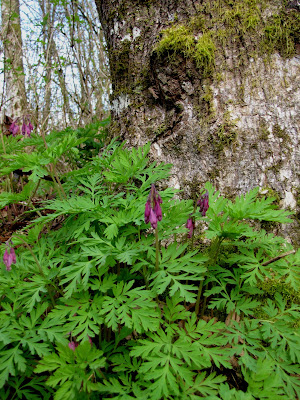 The clumps of trilliums are lovely 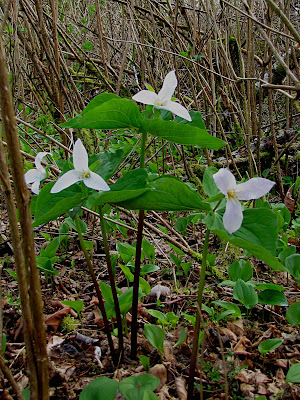 And the stinging nettles not so lovely. 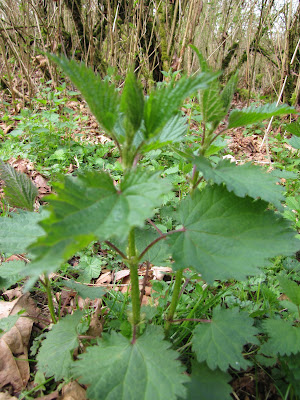 As it was just me out there with the dogs, it was a slow walk as I was trying to take photos.  Luna and Jake don't usually stop and play, but they sure had a long session this time, actually two sessions.
Here's a rather long video of the walk.  (I like to watch video of our dogs, and dogs playing is even better:)) Just be thankful I didn't put in all that I had filmed.
If your volume is up enough you can hear the bell.
It also gives you a bit of an idea how Calli walks.
It also has reminded me that she needs another good furminator session.
Here's the latest on Phin from this link
http://www.facebook.com/pages/Thatll-Do-Border-Collie-Rescue/66850807194
That'll Do Border Collie Rescue No news yet. He remains in the immediate area, but is too sly to be caught and runs whenever he spots someone. Al from Petsearchers is indeed who we hired, and there are both cameras and traps out, but Phin continues to elude everyone :(
Posted by Karen at 11:43 AM