We had a very wet Spring this year, cool too.   Not as bad as some people, who had snow until past the middle of April.  It's all relative though, I think everyone had a later, colder, wetter or snowier Spring.

The Trilliums in our bush have been blooming for quite a while.  They have all reached the pinky purply colour now.  One day I saw a clump of bigger looking Trilliums (not only do they have three petals, but most often seem to grow in clumps of three), so I crashed through the bush to get to them. On the way I came across the deer skull from the cougar kill of a few summers ago, so I carried it over to the Trilliums.  There was something about the contrast, death and rebirth maybe, and I was so taken up with the skull next to the Trilliums that I didn't even get a decent picture of them. 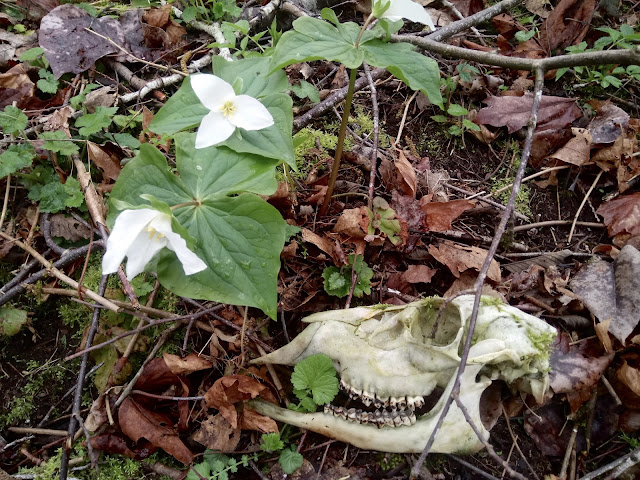 Now I'm not really big on using dog coats, but with so many rainy days, sometimes you just want to have less 'dog' to dry off when you get back to the house.  I found the nice red one for Jake at the thrift store just recently, it is a good fit and lots of coverage, and it only cost me $5.  I think he looks like a red burrito! 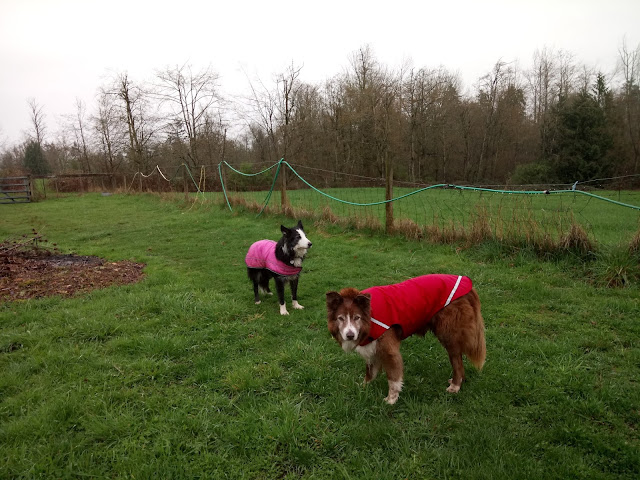 Luna and Bella had some deep discussions about the endless rain..... 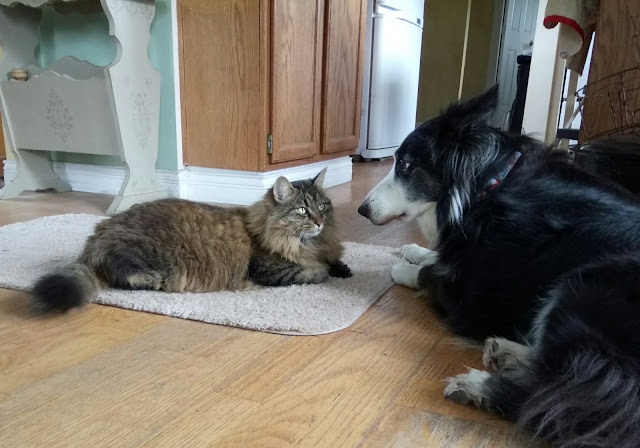 I took the ducks out for a paddle in the drainage canal I dug next to the new row of rhubarb I planted. I've already mentioned the local Bidding Wars group on Facebook that I'm active in.  Well this time I was the winner of a whole bunch of rhubarb plants.  Enough to plant a row of about 20, and another 20 or so that I potted up and will take to the market, which starts in a week! 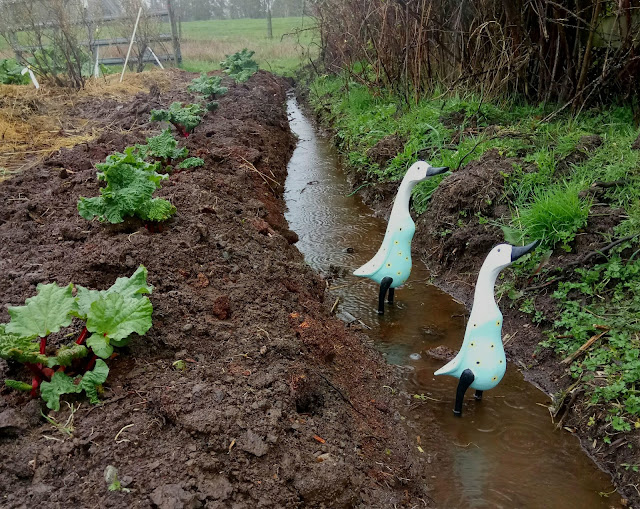 Then I took the ducks for a visit with the chickens, who didn't give a hoot, or a quack!  The wet hens have the same 'tail down' posture of the ducks. 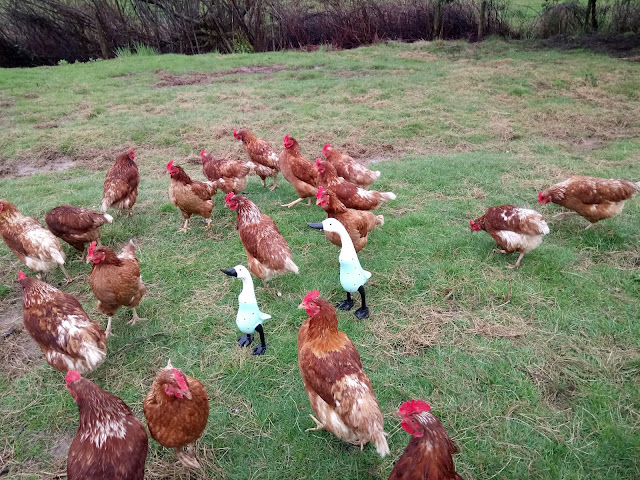 I planted some kohlrabi and broccoli seedlings, and spread some of the ash from the wood stove around them.  It's supposed to help prevent club root.  The big plants are kale from last year, which are sending out nice tender leaves before they flower and go to seed. 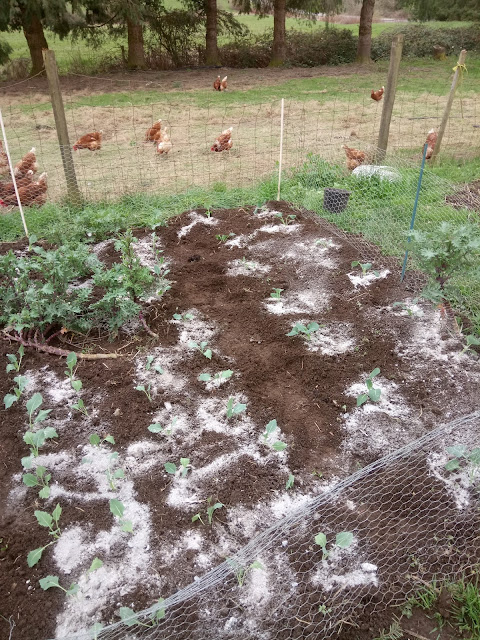 There's a new man in the flock.  The little rooster in the header photo passed away a few weeks ago, he was a good age, he lived at least nine years at our place.  Just after that a free little rooster came up  in a Facebook group I'm in, so I offered him a good home, and went and picked him up.  I like to have a rooster to give a warning when predators are near.  There was a great carry on the other day, I could hear the rooster's little voice shrieking 'danger, danger'.  When we ran outside there was nothing to see, the hens were all hiding, so maybe an eagle had made a low pass. 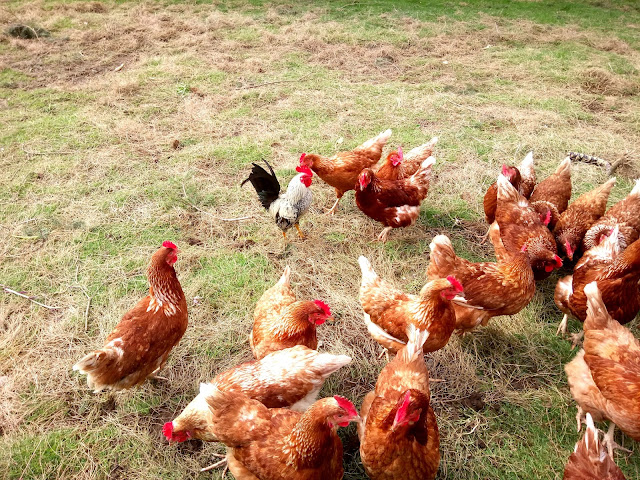 Getting this new little guy, who is quite vocal, made me realize that our old one wasn't using his voice much in the last while.  I like to hear a rooster crow! 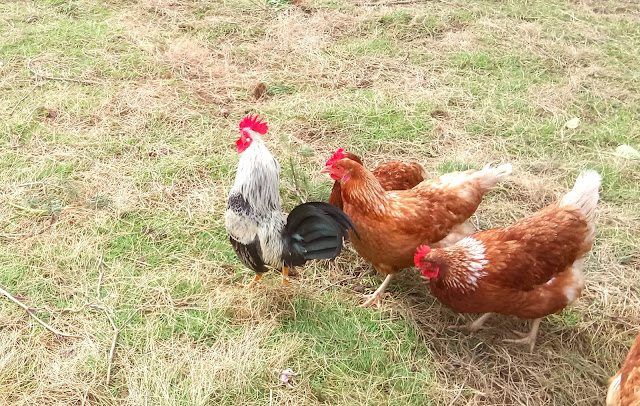 All the rain meant there was lots of opportunities for getting stocked up with jam and marmalade.  I didn't take all those opportunities, but did get some made.  The fixings for Three Fruit marmalade in this picture 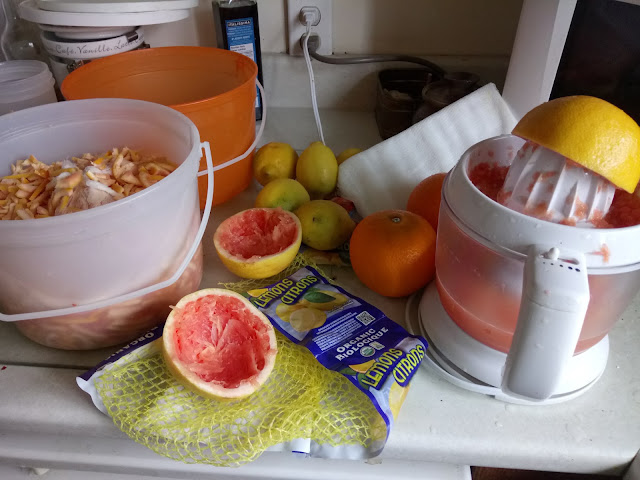 When you have two leaky boots that are opposite feet, the Fashion Forward Frugal Farmer puts the two good ones together and makes a statement! 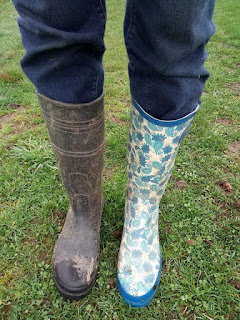 And does something fun with the leaky two! 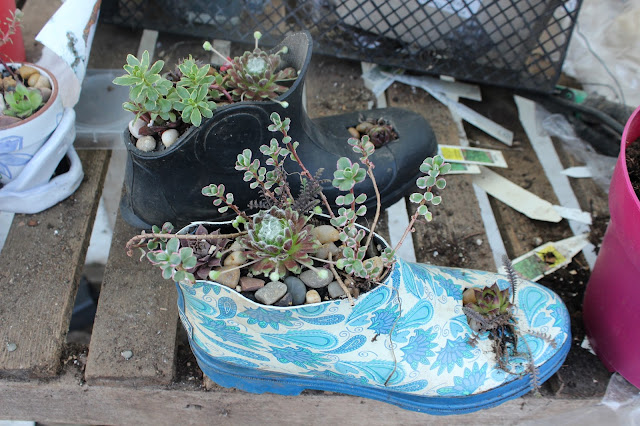 And then it seemed like we went from a wet cold Spring straight into Summer.  Warm and sunny, shorts and t-shirt weather, and the dog's first official swimming session of the season! 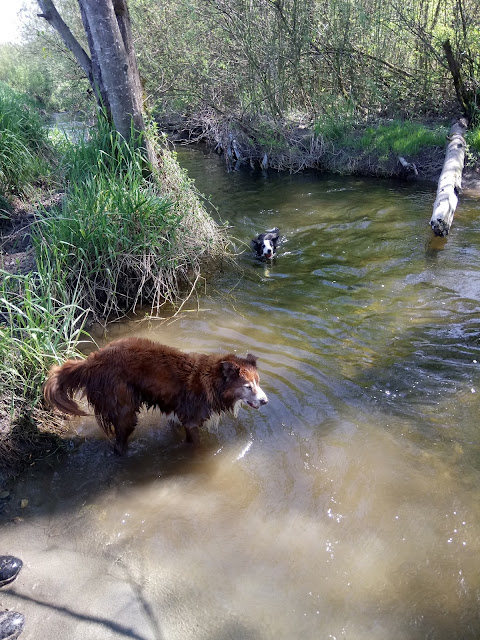 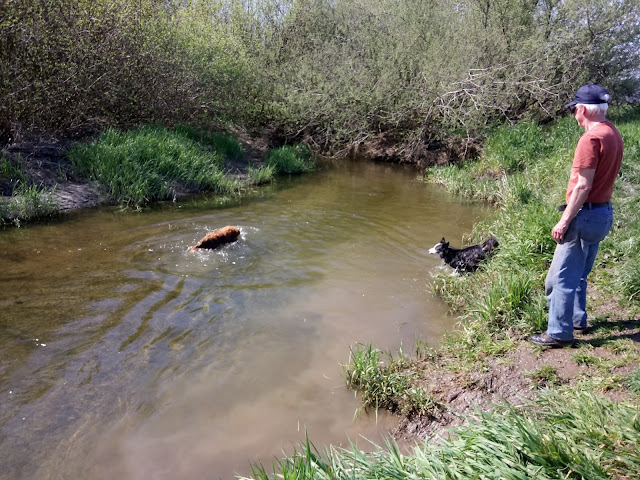 The greenhouse is getting a bit of use, I've planted a few tomato plants and potted up some of the Red Russian kale that seeds itself in the vegetable garden each year. 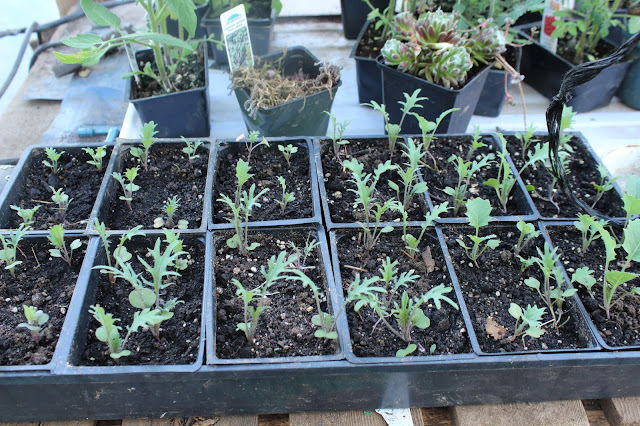 The trees have all burst into full bloom.  That's the ornamental cherry in front, the Bartlett pear in the centre, the Comice pear to the right of it by the barn, and to the left an unknown apple tree just coming into bloom.  On the left of that, quite tall, is what's left of a cherry tree.  We'll be lucky to get any of those cherries. That dark thing down the left side of the photo is the cover over the patio umbrella which I should have cropped out.  It is hiding a clothesline of laundry, of the sort I wouldn't want to be in the photo😆 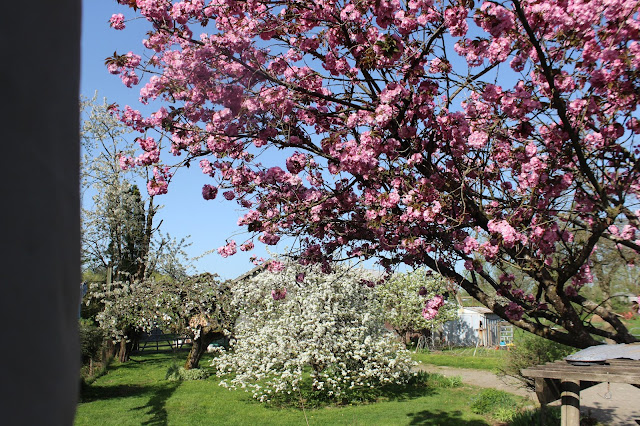 When you stood next to the fruit trees you could hear the wonderful roar of many many bees hard at work. Here on the Bartlett tree. 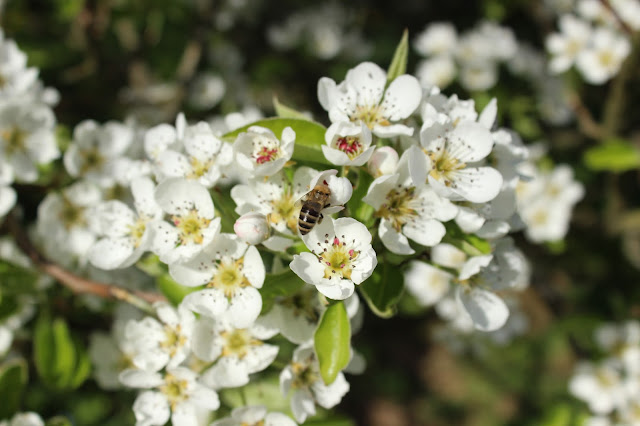 And another bee on an apple blossom 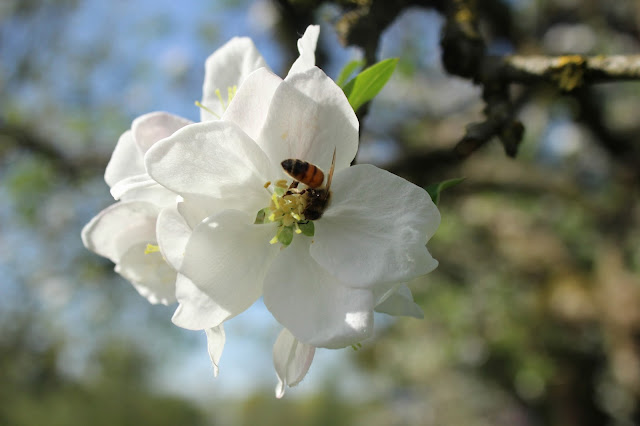 A few tulips whose days are just about done 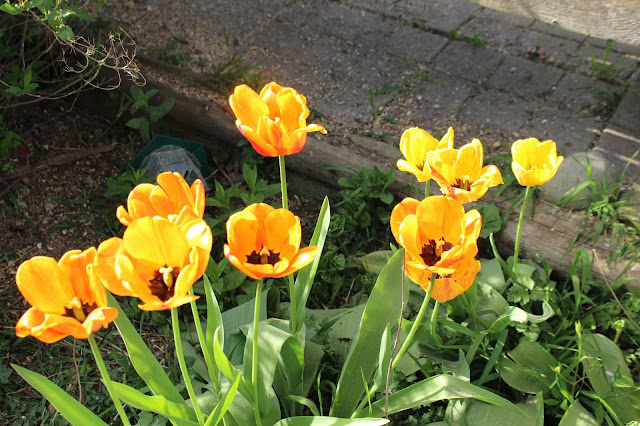 And pansies, that I'm pretty sure were planted here in Spring of 2017!! 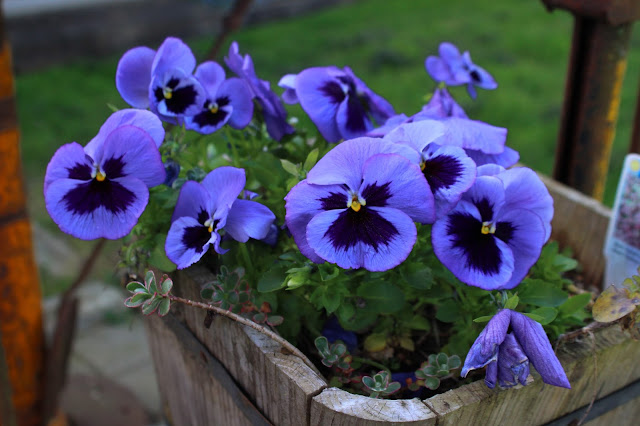 Even out in our bush, the wild cherries are just a mass of blooms, we have never noticed so many as this year.  The pink is the salmonberries blooming. 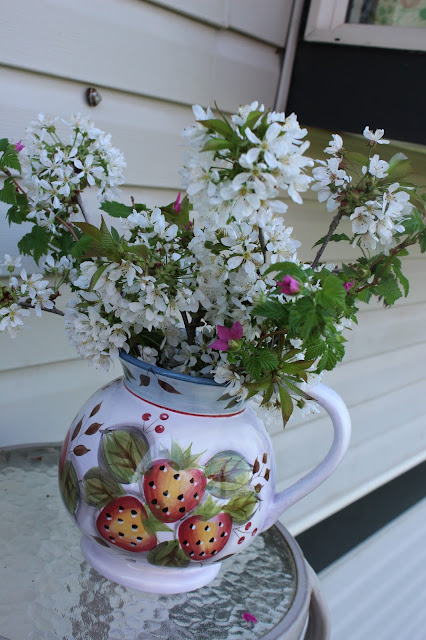 And now, unfortunately, we are back into cold and rain.