As mentioned in my previous post, things deteriorated badly on Friday.  A wind was blowing out of the east and the rain was freezing.  Our power had been off for a couple hours early in the morning, and then flicked off and on a few times, and then went off for good just before 1 pm.

Now this picture taken after the storm makes it look like icicles on the clothesline were blown enough  to freeze sideways.  Actually something happened at the other end of the line, maybe a branch falling or something, that caused the line to twist.  You can see the icicles continuing to freeze straight down.  Three days later, those icicles are still frozen to the clothesline. 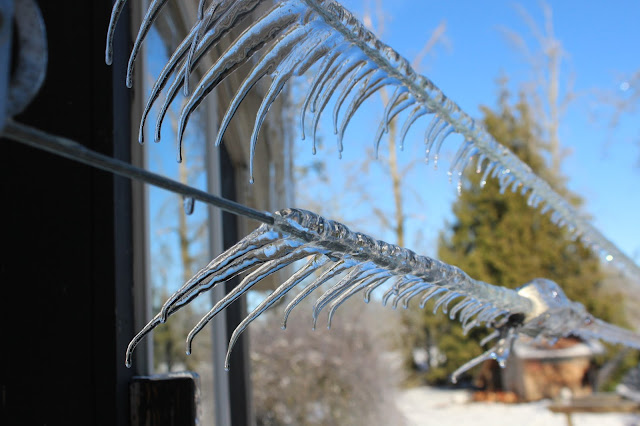 In the afternoon the ice had got thick enough that branches started breaking, and then trees were coming down.  Some branches off the maple tree near the gate had already fallen, and we eyed the rest of the tree up.  The car seemed to be in a vulnerable position.  When I had parked the car I hadn't been able to get it very far into the parking spot, as it was so icy.  Larry suggested driving it around the back of the house, but to do that we would have needed to take it down to the road and get a run at our sloping driveway, and we couldn't do that because there were big branches down and in the way.  I suggested grabbing a few floor mats and putting them behind the wheels, which we did, and managed to get the car backed up onto the patio in front of the house.  Maybe not totally safe, but much better. 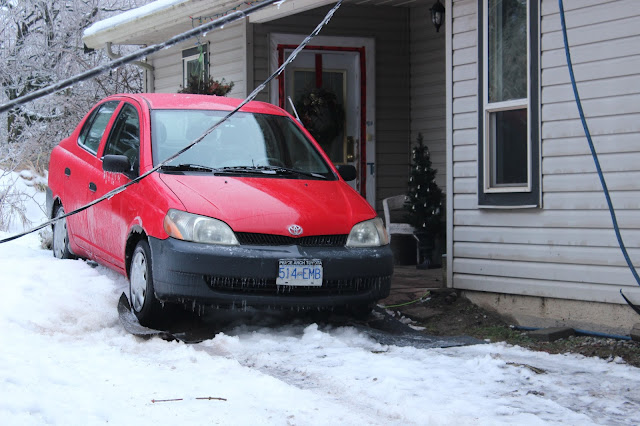 Sometime after dark there was a very loud, very close almighty crash. I looked out of the window just in time to see the cedar trees along the road on the south of our driveway swaying, and there seemed to be more sky showing, so I thought a top had broken off the cedars.  We had already seen some pretty big branches come down below the gate, which had been left open.  We donned our rain gear and grabbed flashlights and went out to look.  We daren't go down the driveway, so went the long way round down the south chicken field and tried to stay away from the trees.  We  could see that a large part of the Big Leaf maple at the bottom of the driveway had crashed over.  I didn't get as close a look as Larry, so didn't realize how big the piece was.

That night we slept downstairs.  There was a large fir tree off the corner of the house near our upstairs bedroom.  I've never worried about it before, but several large branches had crashed off already, and I didn't want to be laying in bed wondering if the next crash was going to be the tree falling on the house.  Needless to say I slept very little that night in the 'safer' bedroom.
When daylight finally arrived, this was the sight looking down our driveway to the road.  I was horrified to see the size the the maple across the driveway at the bottom. 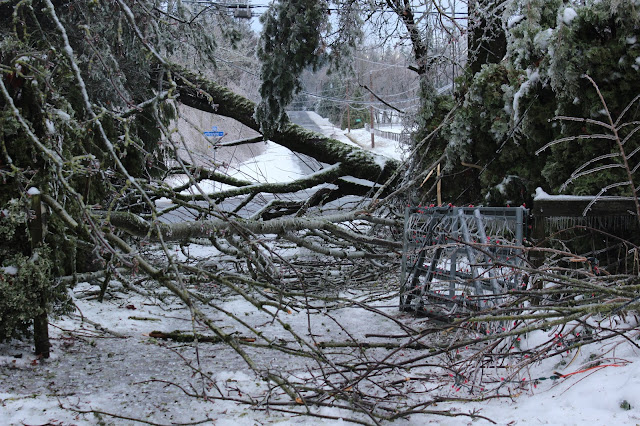 I am generally a 'cup half full' kind of person, so looked for a 'positive' and was pleased to see that the gate was not damaged and we would be able to easily close it to keep the dogs in.
I was also impressed by the ice markings on the first big log.
Nature is amazing! 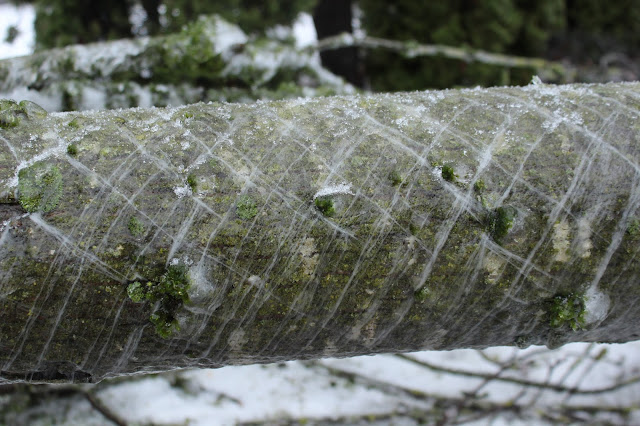 The maple tree split in half at the bottom. 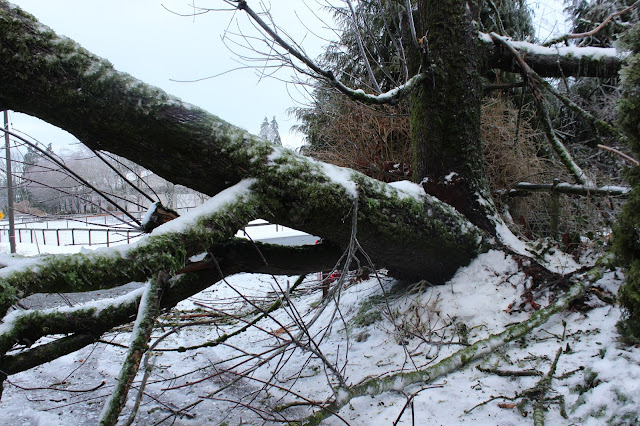 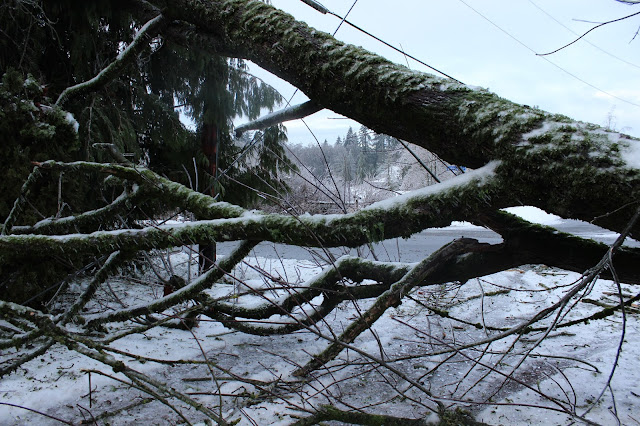 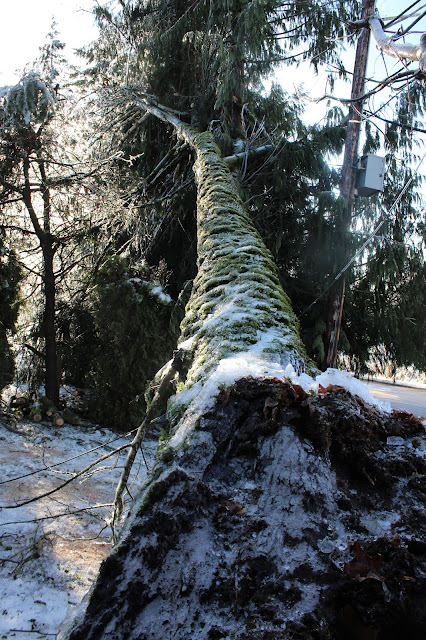 Larry said to just give him a couple of weeks, he'd get that sucker sawn up! 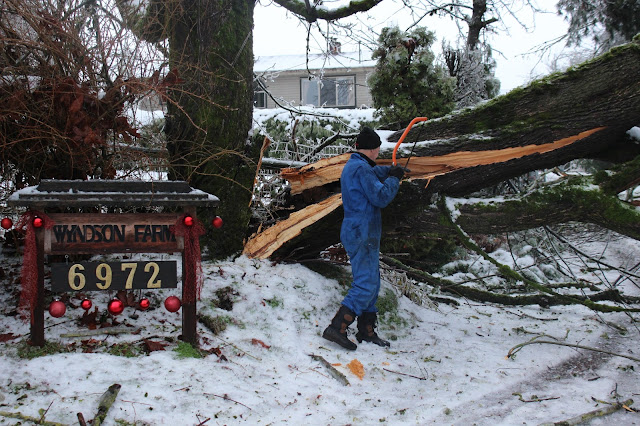 It just gets bigger, and bigger.... 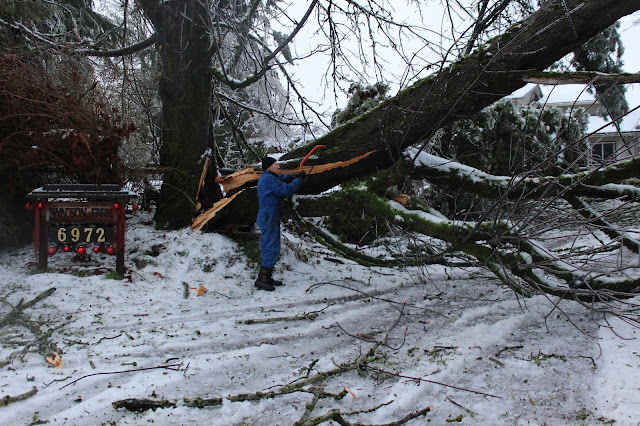 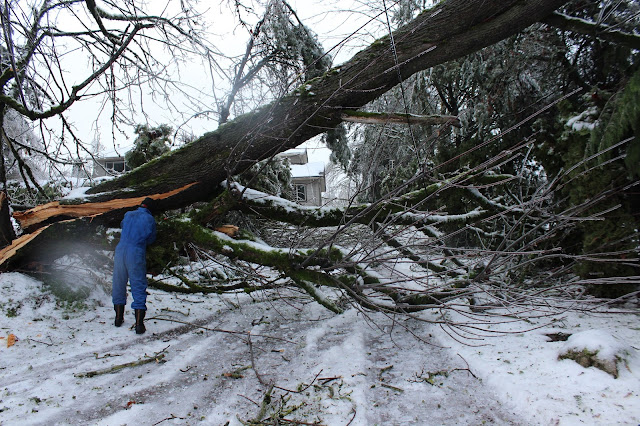 The top of the tree is just to the right of the streetlight in the picture below.  Some branches are at the front of the cedars, some at the back, and some start at the back and end up at the front.  A crew came along clearing the line that runs through the cedars, and trimmed some of the maple branches off.
The power pole was pushed and is leaning into the road a bit now and the bottom line crossing the road is hanging too low.  We are hoping when a crew comes to sort that out, that we can get some info as to whether we are going to have to hire someone to get that tree down for us.
Fingers crossed that the power company will do it. 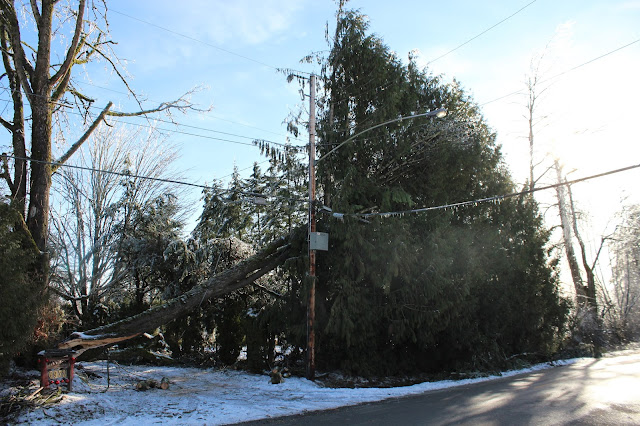 I was kind of worried as we supposed to be doing an egg run to White Rock that Saturday afternoon.
In the end it seems that 99% of the weight of the tree is being supported by the cedars, so Larry and David were able to saw the bottom branches away and there was room to drive under it! Hooray!! 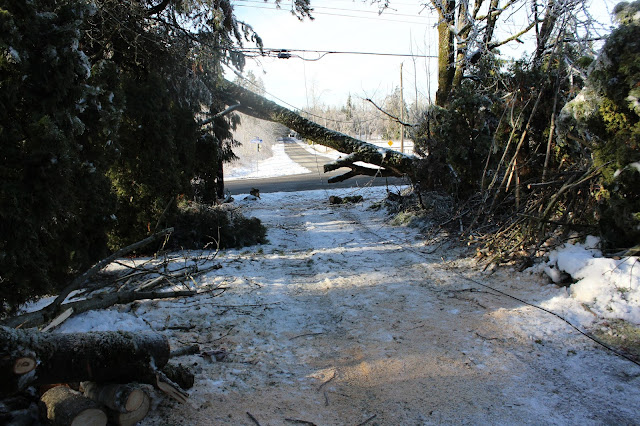 We were able to drive to White Rock, although there were still trees down on the roads close to home, but White Rock was like a different world with no snow or ice.

The tree also pulled our internet line off the peak of the house, but it is still connected at both ends, so once our power line was reconnected, we had internet again. Yahoo! Right now it trails down the driveway and goes under the big tree.

Each year around this time we try to take a family photo, and aim for a different location each time.  This year I was glad we were late taking it, as the tree became the obvious choice! 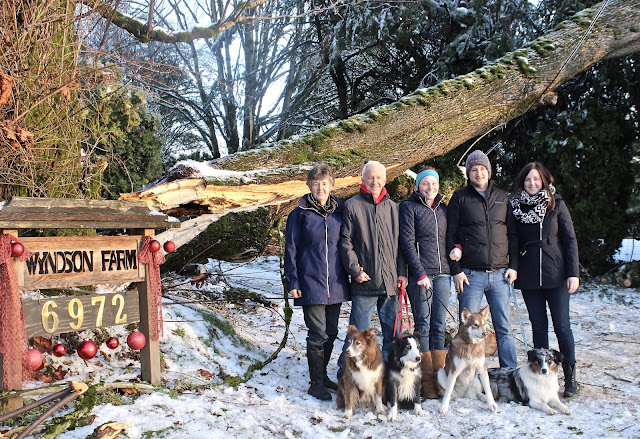