Leading Up To The Kayaking

I've got to say, blogging seemed so much easier when I just had one camera and one computer.  An older computer that I was so familiar with and seemed to have no issues getting pictures up and a blog written.  Then last summer the computer died, and had to be replaced and has Windows 10 or something and I don't know, things are different and there are different places that I have the pictures and I seem to have issues.  About the same time I upgraded my phone and it has a decent camera and so was using that more for photos because it was just so convenient, oh and along the way I acquired a better camera.  Then I was gifted an older Apple laptop so mostly use that now, but not totally familiar with it, and everything just seems so flippin' difficult sometimes. Ok, rant over, just letting you know I have not totally adjusted to all this extra technology.

So this post has been in the works for the last week or more.  Well more like 4 weeks, if I really think about it.  Along the way I seem to have lost some photos on the phone, I think they may have ended up on the SD card, but don't know how to check and Google wasn't really giving me a nice simple answer.

We've always liked bike riding.  We seem to make more time for it when we are at Wyndson Cottage in Oliver, and don't get a lot done here.  Maybe because we have  flatter options in Oliver, and here, riding from the house involves hills.


A winter ride to Tucelnuit Lake in Oliver 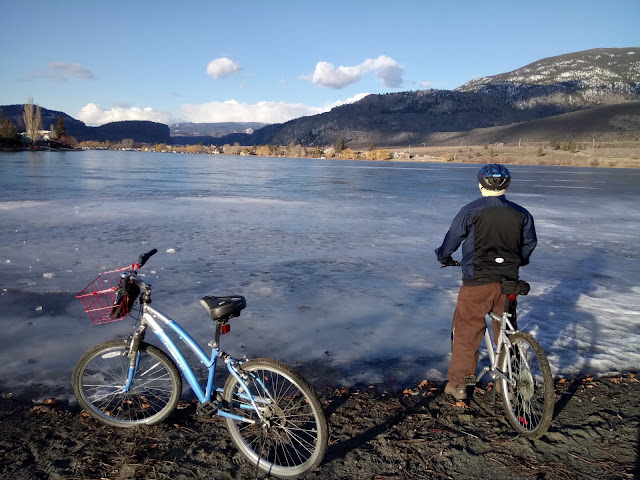 About six weeks ago I suggested that we go one evening to Ft. Langley ( a little cute historic town 15 minutes away) and ride the Fort to Fort trail.  We ended up Derby Reach park and campsite.  Lovely evening, the sun setting over the river. 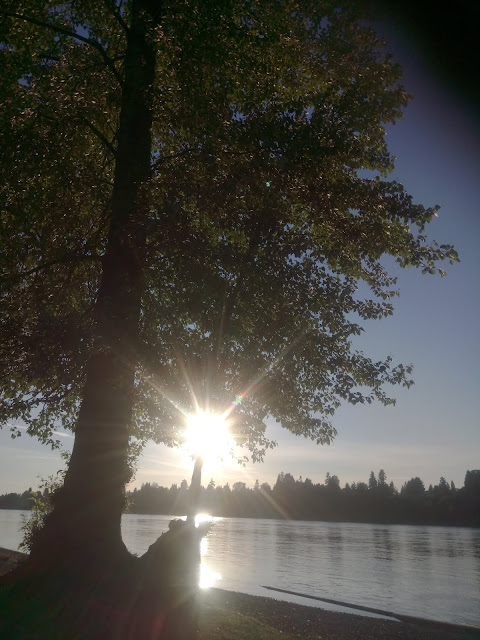 A pretty cool boat moored in the channel. 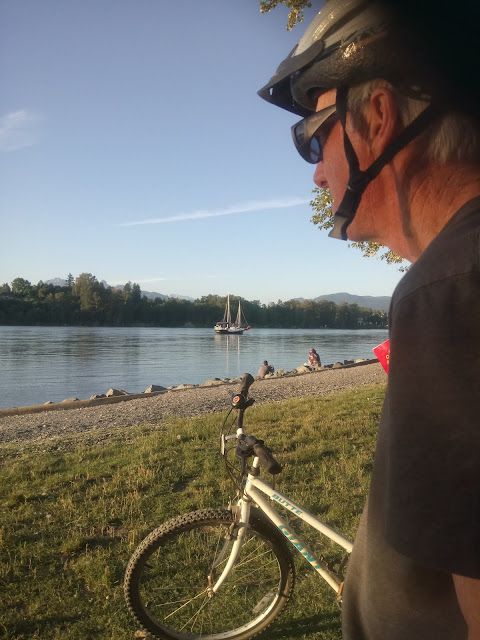 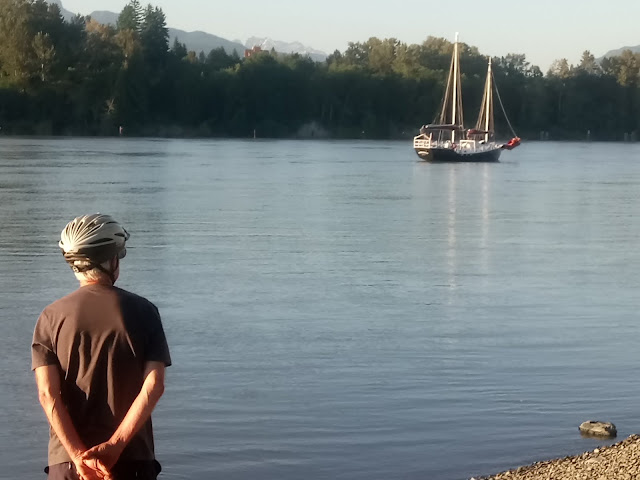 So we made some effort and three times a week for a few weeks, we got ourselves out for a ride.  Mostly in the evening, but sometimes during the day.  We found that if we took the front wheels off our bikes (they have a quick release), one fit in the back seat of our little car and the other in the trunk.  So sometimes we drove to a different area to ride, and sometimes we rode out from home.

When we were at Oliver a couple of weeks ago, Larry picked out a route.  Instead of along the dyke, we went west and uphill.  I knew it was uphill, we've driven that way lots of times, but it is only when you are on a bike that your REALLY realize how uphill it is.  We had to get off and walk a few times, it was a warm and muggy evening.  A bit of smoke haze over the mountains.
In the photo below we are on the downhill.  The vegetation was so dry, they had no rain at all for weeks.  We have driven down this particular road a few times, but never realized that there is a creek burbling it's way down the hill.  It just seemed so out of place in the dryness, and we kept trying to  see it.  At times it was right next to the road, but had worn itself such a deep narrow channel that the bushes kept it hidden until we finally found an open spot and could actually see the water 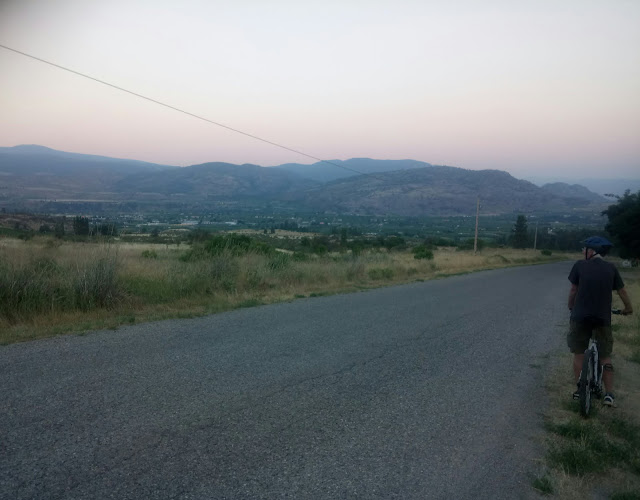 One time we went back to Ft. Langley and the campsite, and rode out in a different direction.  A really nice beach area along the river, I could only think how the dogs would enjoy that.  The Golden Ears Bridge in the background. 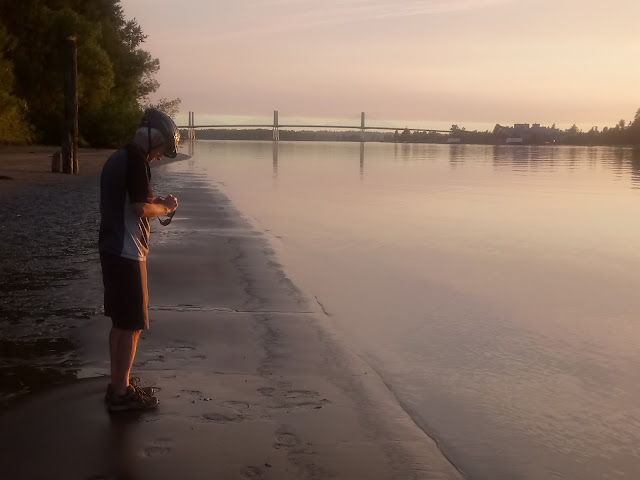 I had picked up a bulletin from the park, which had all sorts of events listed at the various parks in the area.  The only one that really interested me was a free tryout of a kayak or in a 12 person war canoe.  So on that day I suggested we drive down and park at the dyke where we walk the dogs, and then ride along River Rd. into Ft. Langley and then over the bridge to Brae Island Regional Park.  We both got kayaks to try out, and we loved it.  Well maybe me more than Larry, but he had a good time too (those are some of the pictures I have 'misplaced').  And the rest is history I guess.  I checked out kayaks on Craigslist and a few other places and ended up getting a couple of starter ones on sale for a good price from Canadian Tire.

Last week we took them into town and had a paddle on Mill Lake.  Meredith met us there and tried them out.  Another smoky evening (we have had a week now of smoke hanging over us from wildfires in other parts of the province.) Meredith took this picture of me. 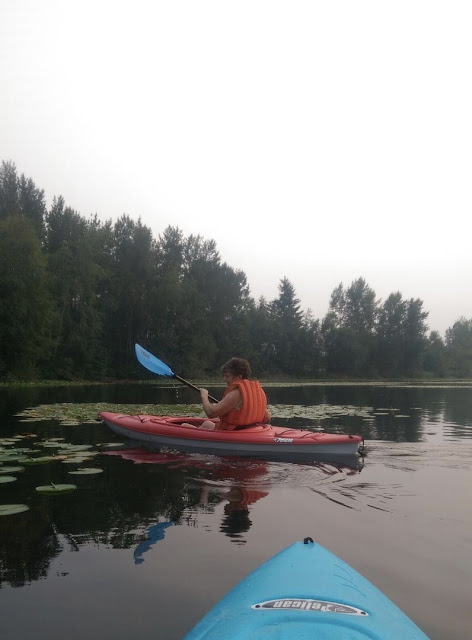 The smoke isn't too obvious at ground level close up, but we can't see any mountains, and sometimes we can smell it when we go outside.

The last two weeks, we haven't been able to keep up our three times a week rides, but are trying to get back into it this week.
Last night we went out.  It was just supposed to be a short ride, it was still warm and a bit muggy. So 2 1/4 miles to the end of Bradner Rd, by Jubilee Hall, and then home.  We got to the end and I said I wanted to check out the old road.  The road used to wind down the hill at that point, steep and gravelly and hard to maintain, and often closed in winter.  Some years ago they gave up on it, and gated it off at both ends.  It appears that the quad people had been keeping it well used.  We got down to the first corner,  I looked at Larry and asked if he wanted to just keep going, and he said 'sure!' (which actually surprised me!)

We got off the old pavement onto loose steep gravel.  He asked me how I was doing with the braking, he was having a bit of trouble keeping control.  I think I had better treads on my tires and was doing slightly better, but did slow down some more.  We passed a pile of bear poop.  I talked loudly 😉 I glanced at a quad trail joining up with the old road, and then when I looked back there was a big ditch in the road.  I braked but couldn't stop or avoid it, and so came to an abrupt halt, and I and the bike did a slow somersault.  Oops.  Injuries were minor.  Some skin missing below my right knee, scrapes on my left shin, a good scratch on my right thigh and a bruise on my left hip.  The heels of my hands were sore as they took some of the impact.  I thought Larry was going to wipe out in his rush to stop and come to my aid. A bit of blood but nothing much.  It was a reminder though to carry a bit of first aid with us.  We continued on and then once we got back onto the main road we stopped and I took this photo.  None of the cameras I've tried will pick up the redness of the sun.  That is not mist out there, it is smoke.  It looks worse because we are looking a long distance and the smoke is compounded. 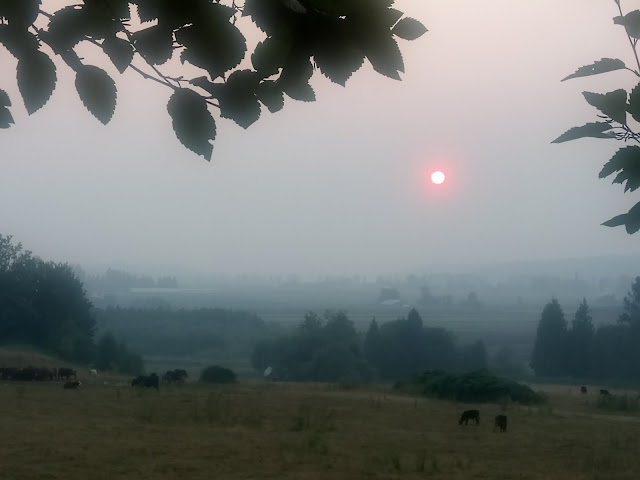 We got down onto the flat and rode until we hit the very steep hill heading back up to our area.  It was a walking hill.  The last time I attempted it I got flashing lights at the edge of my vision.  Once we made it to the top, a bit of downhill and home.  About 6.5 miles


Today we went kayaking on the Fraser River.  Not terribly exciting, and still smoky.

Did some Googling this evening and have now fixed the blurriness on the main camera on my phone. See the difference between this one in the kayaks and the one below it taken with the front camera?  Was finding it very frustrating, but future pictures will be better now! 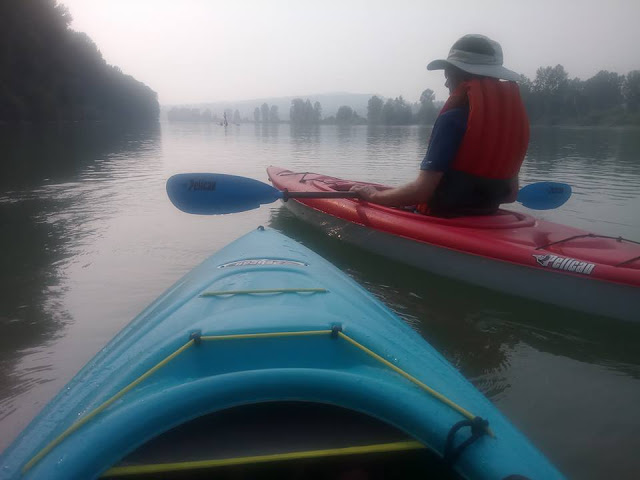 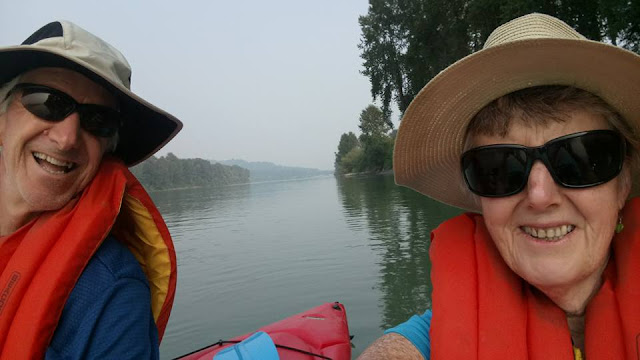 We just got back home and Meredith texted us Happy Anniversary.  Pretty funny, neither of us had remembered, that is a first for me, although not Larry.😉
At least we spent some fun time together today.
36 years ago on another hot August day.....