Life seems like it has been pretty hectic lately.  The farmers market season is in full swing, and the first four have been very good. Finally we have been getting some good weather, days of it in a row, and no rain, and the ground has dried up, the weeds are knee high to a giraffe, and EVERYTHING needs doing yesterday.  So we keep plugging along....

Last week we made a dash for Oliver on Monday evening and came back Wednesday evening.  Our last chance to take advantage of David as a house sitter.  He has been in Edmonton since the start of the month, but took the week off, since Monday was a holiday and Thursday was his graduation day and he was flying back for that.

Meredith travelled in to Vancouver with Larry and I, we left about 9:15 for the 11am ceremony.  It was supposed to be a 9am departure, but someone didn't get themselves here on time 😉(Look out, I've just learned how to add emojis to the blog!)  Google told us it may take up to an hour and 40 minutes, depending on traffic of course, but we did it in an hour and 15, the parkade was right next to the Chan Centre and we made it in good time.  We connected with Melissa and got our seats.  The lighting in the room was not conducive to good photos.

This particular ceremony was for Forestry and Kinesiology students.  The grads all filed in and filled up the chairs on the stage and then the seats down in front.  We got a good view of David because he and a few others went up onto the stage and then found out that there was no seating left so had to walk back down and he ended up fourth from the left on the front row. 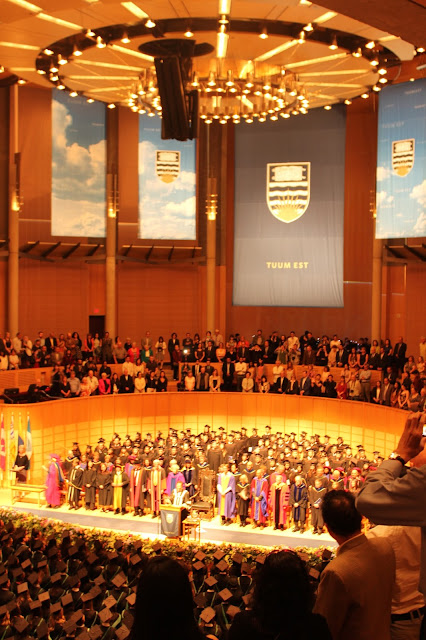 That is Simon, the head of the department, holding the big wooden mallet thing, that had Haida carvings on it. I asked David about it and he seemed to know nothing. The grads receiving their doctorates were called up first, and then those with masters degrees, and then the bachelors degrees. Like all grad ceremonies it was long and a bit boring, but better than the high school grad.  The speeches were not too long and mostly interesting, so all in all it wasn't a chore to be there 😉 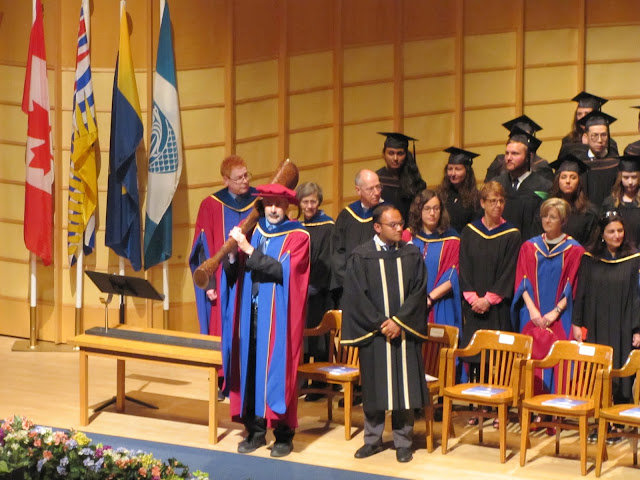 Where I was sitting, I wasn't able to see the grads as they first entered the stage, so missed David's name being called, but did catch him crossing the stage.  We even made a bit of noise for him, and that was a big deal for me, as I am not a screamer at public events.  Each Grad was given three tickets for family, and then on a certain day extras came up for purchase.  Those all sold out in an hour and David missed out.  Fortunately one of his friends was not attending so shared his three tickets and David was able to get one extra.  If he could have got more  tickets, Melissa's parents and grandpa would have attended as well. 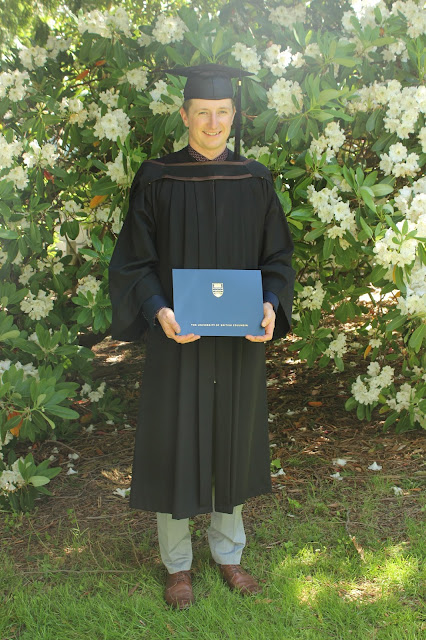 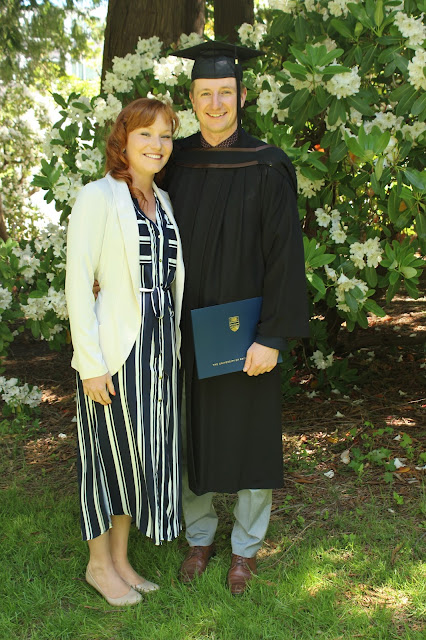 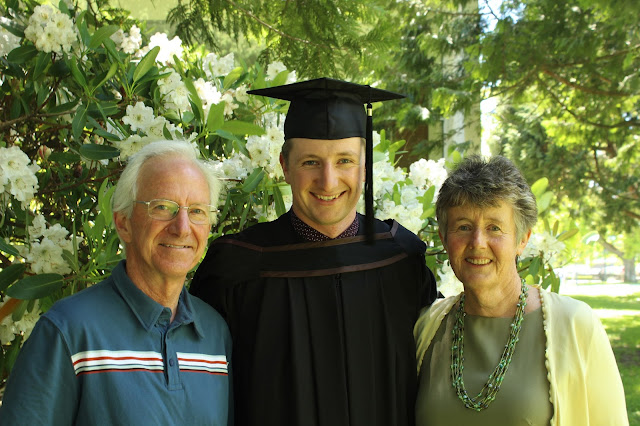 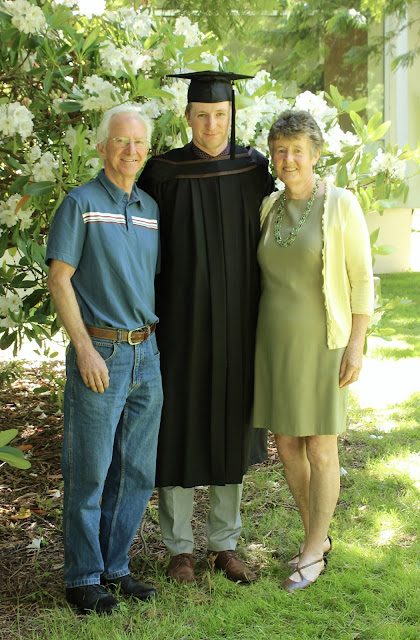 With Meredith, his sister 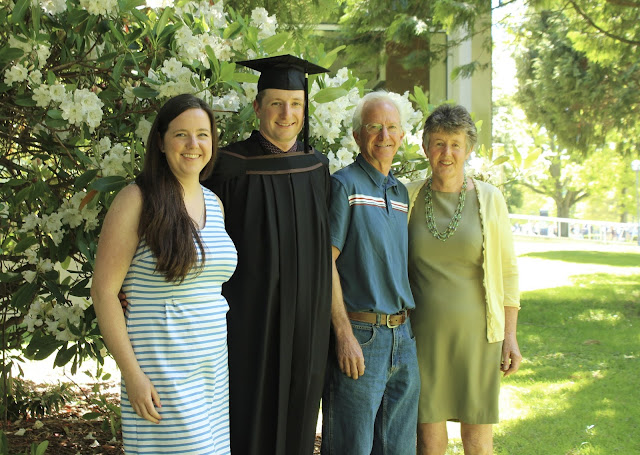 Unfortunately I didn't realize as I was kneeling on the ground (see my knees?) to set up the camera on a wood rail, that the filtered sunlight was hitting the lens slightly, so we look a bit 'misty'. 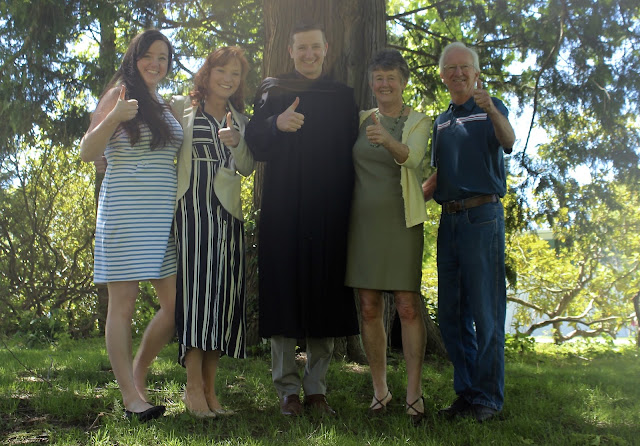 With Associate Professor Simon Ellis, program director, Wood Products Processing, and the 'mallet', and Santa Ono, the President and Vice Chancellor of the University of British Columbia. 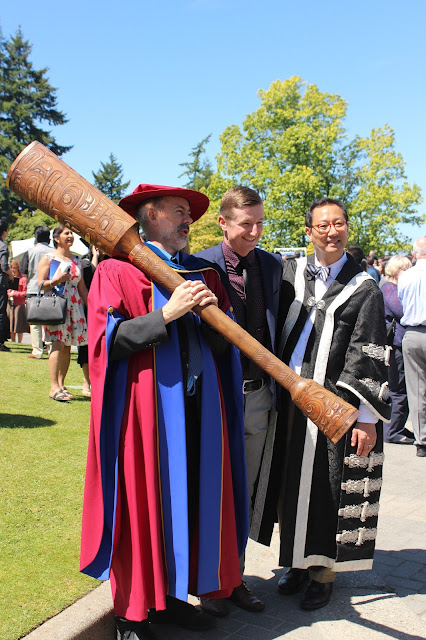 David even left a bit of a legacy.  Because of his internship with Rolls Royce in England for one of his co-op terms, Rolls Royce and the Co-op Coordinator have been in discussion, and Rolls Royce is interested in more Canadian students coming to work for them.

There was a reception afterwards in the Forestry building.  We got there in time to grab a bite to eat, and then it was time to head out, as coincidence would have it, Larry had an appointment at the eye specialist about 20 minutes away.
Of course it took more than 20 minutes to get there, so we dropped Larry off and Meredith and I went to a grocery store to get something for the barbecue at Melissa's parents house afterwards.  We sat in the car for a while in the free parking, and then my phone rang and it was the doctors office looking for Larry.  This was nearly an hour after his scheduled appointment time.  I had this vision of him having passed out in the lobby, but it turns out they had just 'lost' him in the waiting room.  So in the meantime we went to another grocery store and then searched for free parking.  Managed to find a spot and waited for Larry to text that he was done.  We finally left Vancouver about 4 pm and we were in rush hour traffic so didn't get back to our place until after 5:30.  Our poor dogs got a quick walk and were fed and then we left again for the barbeque.  A nice time was had by all, we got back home and took the dogs out again for a walk. Phew, we had spent the equivalent time in the car as the four hour trip to Oliver.
Oh, and Larry's eyes are excellent, as they continue to recover from the epithelial cell transplant needed because of Fuch's Dystrophy.