You've seen most of this before, but I wanted to show you how green Oliver Mountain was this Spring after the fire of last summer.  The grass has returned with a vengeance.  It was a beautiful day for a hike. 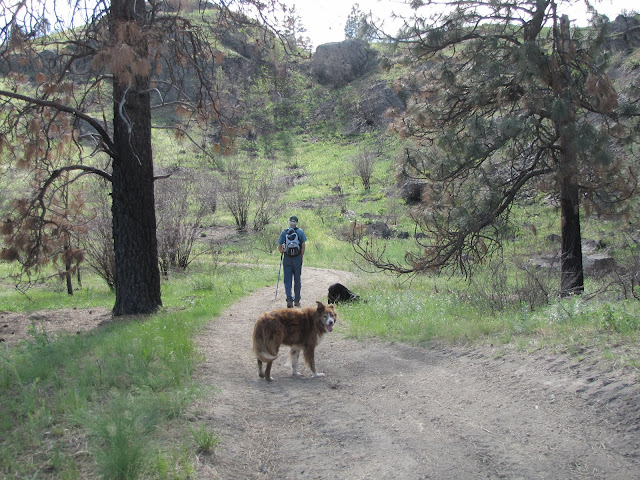 A new line of power poles went up the mountain, along with a wider ATV trail, so that is what we followed.  We worked hard to keep Luna on the trail and close by, and I am happy to say that this is the first time I didn't have to pull spiny cactus bits from her feet. 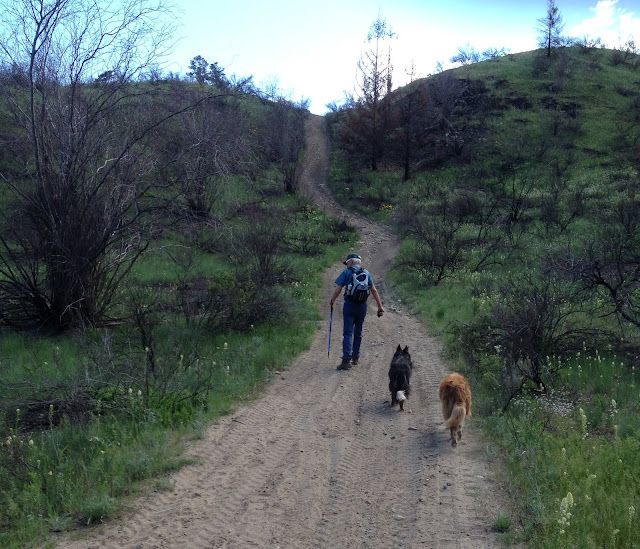 The clumps of Arrowleaf Balsamroot  were so pretty.  I was wondering if there were two types, as some seemed to have wider petals than others. 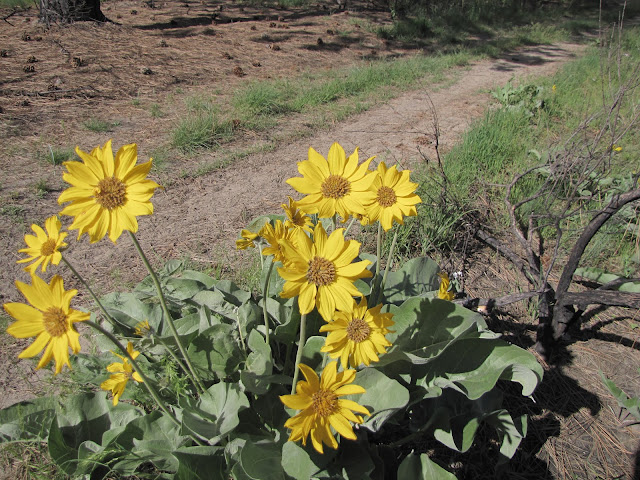 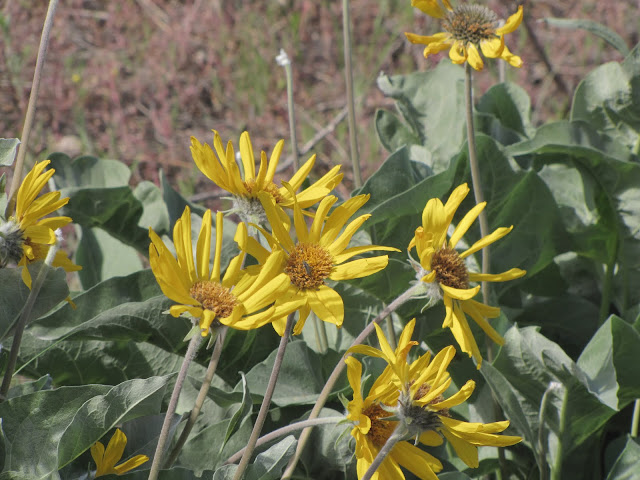 Not long ago vandals cut the guy wires to the cell tower at the top of the mountain, and toppled it over.  When we were there, three guys were working to take the tower apart in preparation to remove it from the mountain.  The next day we could see a helicopter carrying parts away. 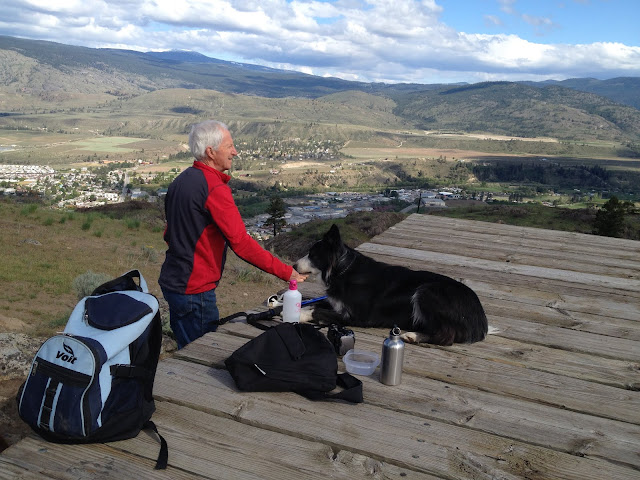 Luna relaxing on the helicopter pad.  You can see for miles. We are looking down the valley towards Osoyoos. 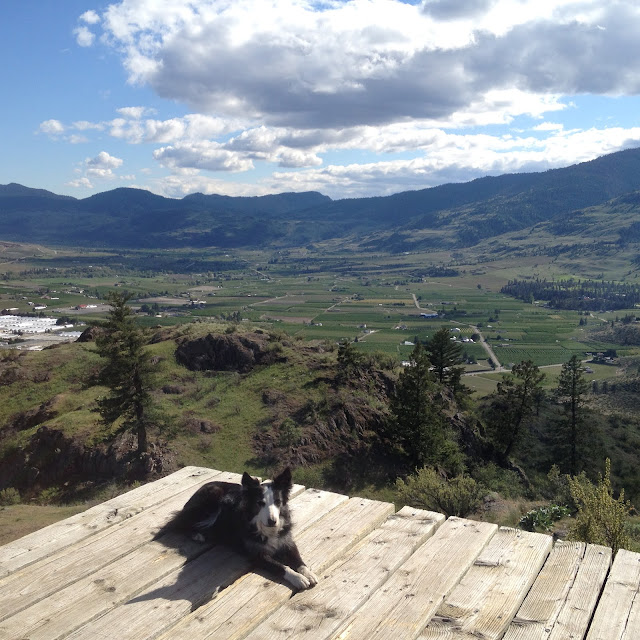 Looking to the northeast with Tuc-el-nuit Lake behind me. 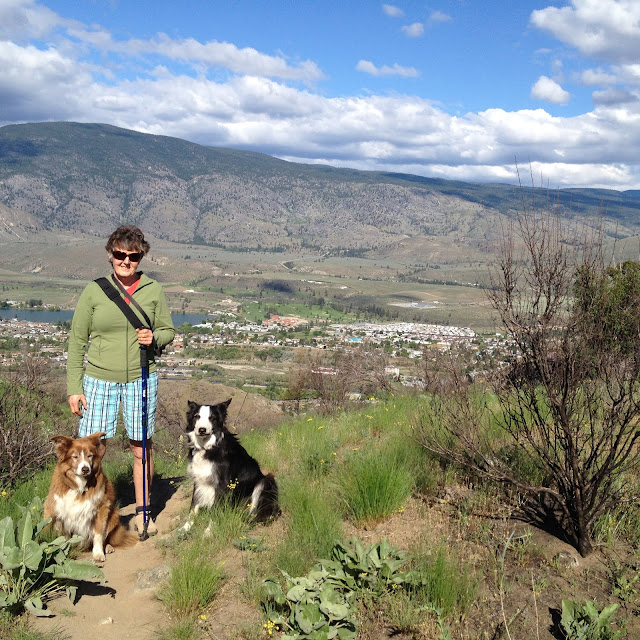 Look at all that grass. 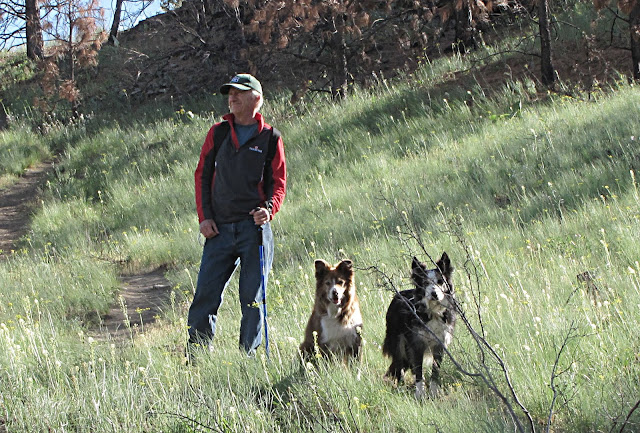 Some of the Ponderosa Pines had only been burned at the bottom, so it looked like they would survive.  Some of the smaller ones were burned for their full height, and I think they were done in. 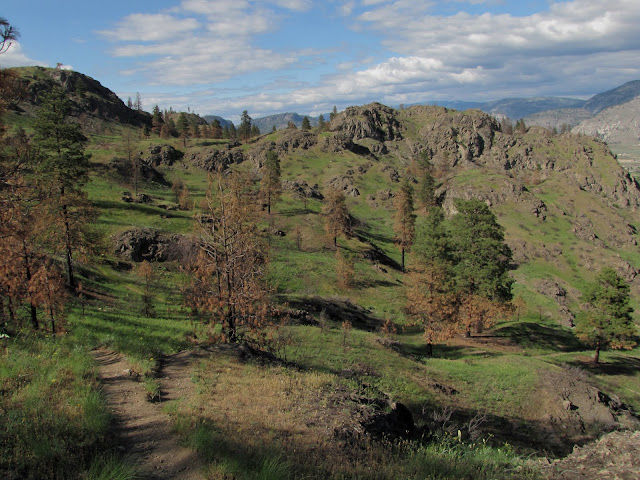 Lots of green, and a good dog on the trail. 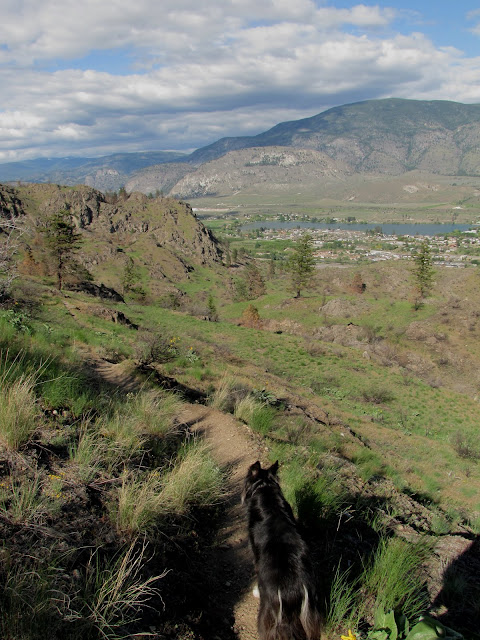 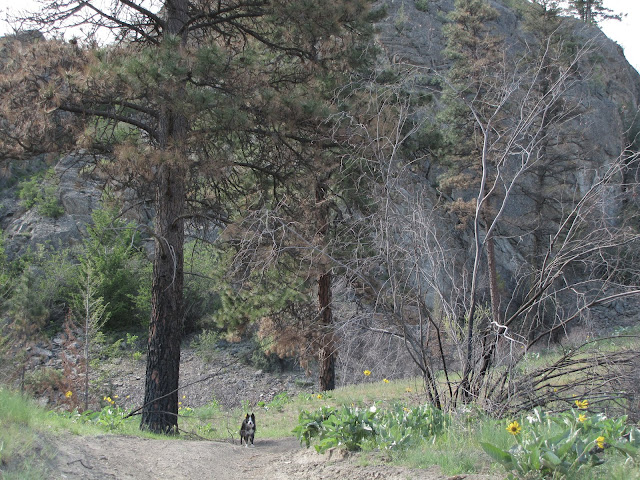 Lots of little clumps of different sorts of flowers.  These look like a creeping Phlox.....anyone? 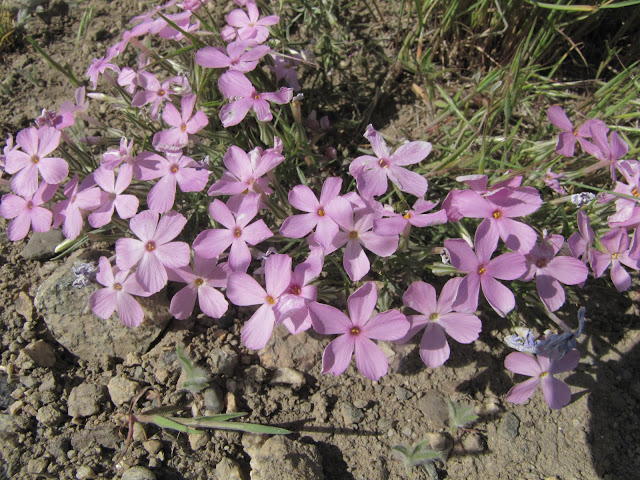 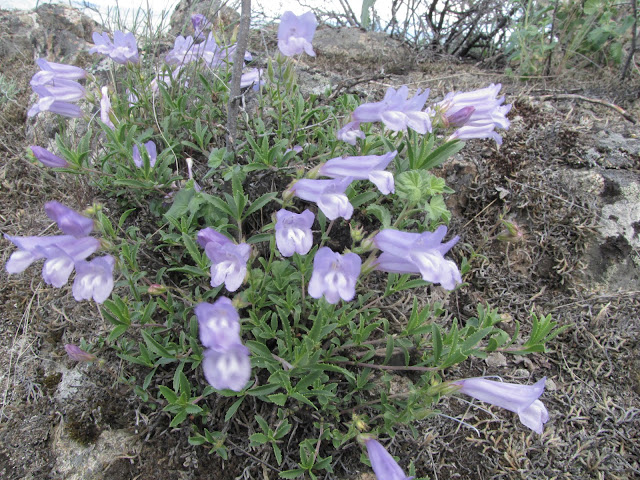 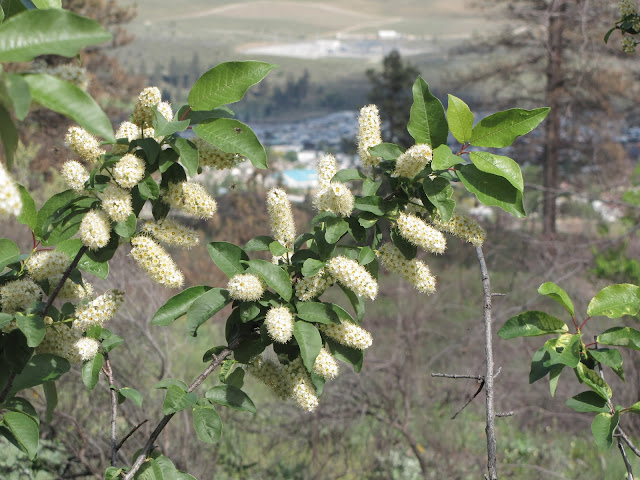 These little yellow flowers were tiny, about the size of a penny. 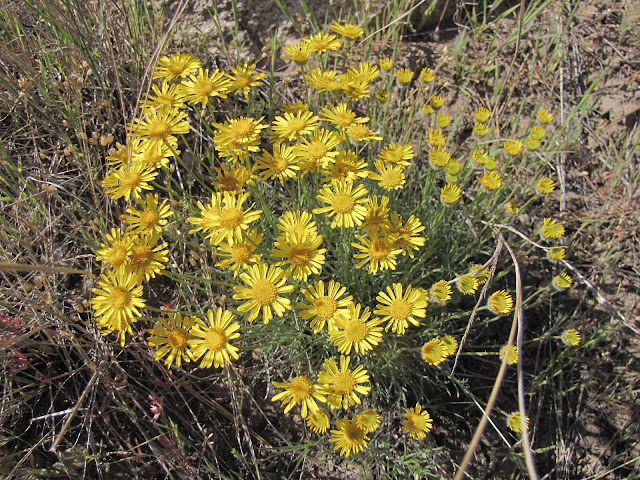 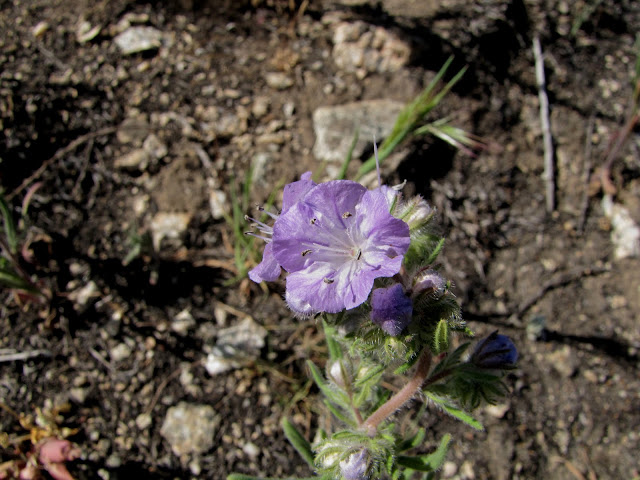 This something new.  It was in the really burned areas.  I have just decided that it is probably a flower from the Prickly Pear cactus. 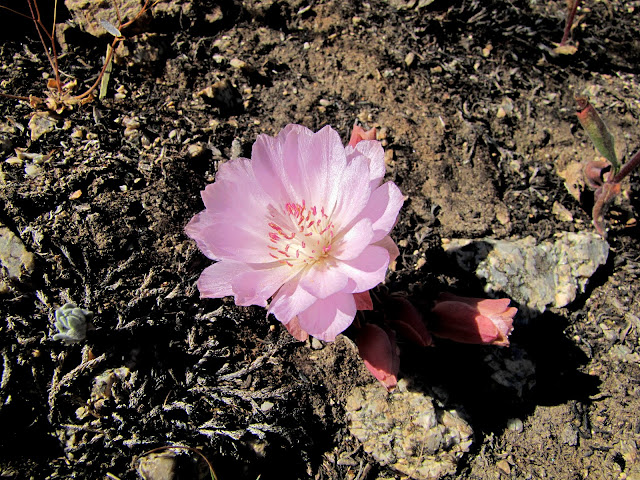 Columbine.
They were only in one specific area.  A little valley I liked to walk through, that was burned badly, but the Columbines on the rock scree were still there. 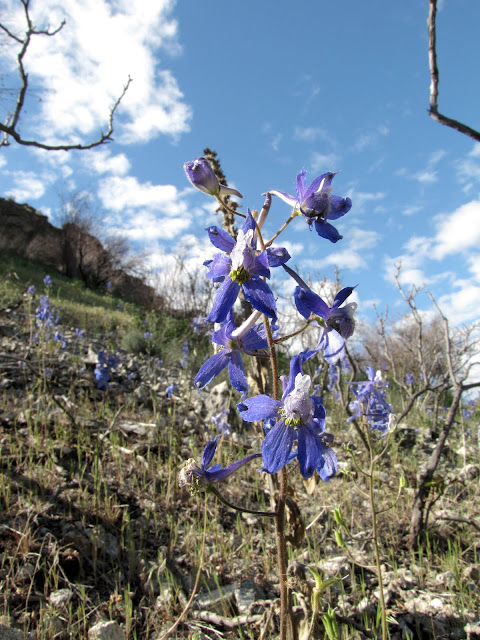 Almost at the bottom.  The water tower ahead on the right.
Two good (tired) dogs plodding down the trail. 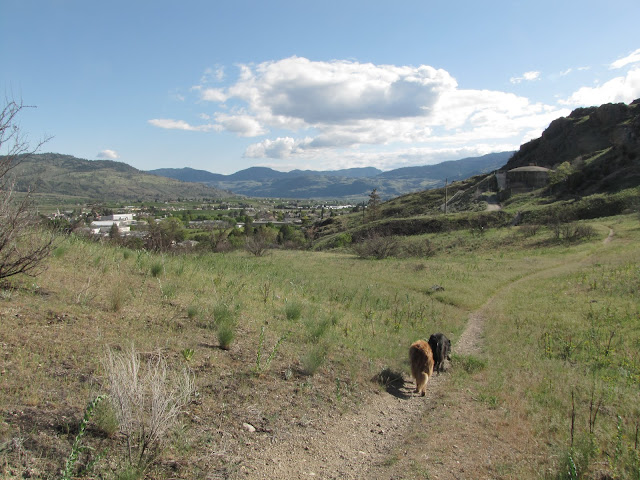 I have managed to accidentally delete two posts, maybe more.  The Sun Run one, and the one of the fields of yellow flowers.
Very maddening.