Today I was gearing myself up for a two market weekend.  It was three weeks since I had been at the Abbotsford Market, and I was due to go to the one this Saturday, or so I thought.  I got an email telling me which vendors where at the market, and I wasn't one of them.  I wasn't included in the Facebook posts either.  Hmmm.  I contacted the manager, and apparently on my application it said my next market was September 26, but if I wanted to come tomorrow, there was room for me there.  In the end I decided to just wait until the 26th, as I couldn't think really remember telling anyone that I would be there this Saturday, and those that get the email and see the Facebook posting wouldn't be expecting me there tomorrow.  Also, the weather is supposed to be the pits this weekend, so to just have one wet market instead of two seemed like a weird sort of bonus to me.  And then I felt like I had been awarded a free day!  Although not really, because then I didn't do the couple of batches of jam that I had planned on doing this afternoon, but went outside and puttered around instead.

I told Larry that I had seen a patch of feathers in the chicken field.  I had a feeling something might have been going on down there.  Jake had been doing lots of barking, I know there had been a hawk hanging around, but when I went out to check when the chickens or Jake were telling me that things were NOT all right in their world, there was never anything to see.

Larry searched the fence line and couldn't find any evidence that it had been breached.  He even went into the neighbours and looked from their side. It wasn't until he cut some underbrush away that he found two holes under the fence.  We do like to leave some of the underbrush, as it gives the hens somewhere to take cover in case of an aerial attack.  So he got his chainsaw out and cut some lengths of wood and pounded them into the ground to block the holes.  In other spots there are roots or extra wire blocking any digging. 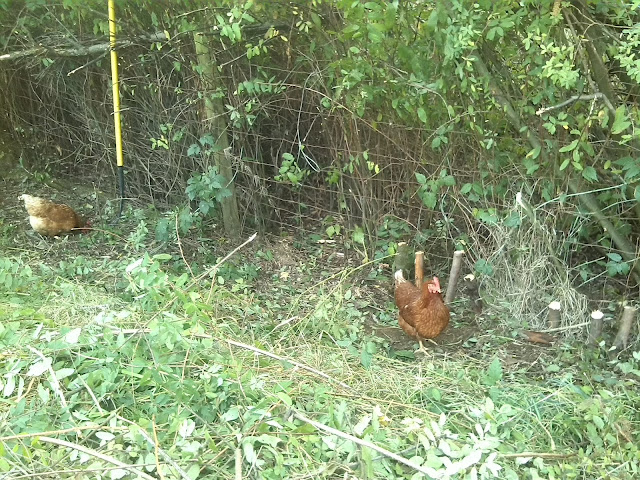 Since it was time for her ladyship to go out for an afternoon pee, I took her down to the field.  The noise of the chainsaw doesn't bother her, especially since she probably can't hear it anyway:)  The border collies couldn't get into the basement fast enough. 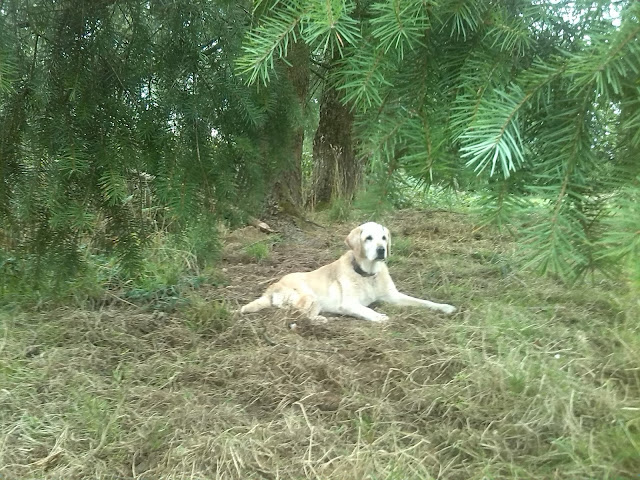 I 'suggested' that well, since he had the chainsaw down there......wouldn't it be a good idea to start sawing up that top of an alder that blew off in a windstorm we had three weeks ago.

Didn't tell you about that, did I?
Our power was out 32 1/2 hours in total.  Us and about 500, 000 others lost power.  I was at the Abbotsford market that day.  Thank goodness Cathy was with me.  The wind hit, and it was terrible.  I had been somewhat prepared, and had both the market tents fastened down as best I could.  They couldn't really move around, but the wind was blasting the tops so hard, we had to hang on to the framework to keep them from being destroyed.  People started to pack up.  A pottery vendor had their whole display blown over and smashed.  We couldn't pack up because we couldn't let go of the tents.  We couldn't take the tents down because we needed someone to hold each corner, and there was no one to help.  Eventually we got help and we managed to get the tents down.  The apron rack blew over and aprons blew down the street.  I was lucky, only one jar of jam was smashed, but the heavy apron rack crashed into the elbow of one of the helpers, and he was writhing in pain for a bit:(  It was absolutely terrifying, the force of that wind. The market closed early and we headed home.  We managed to avoid getting hit by flying debris, and then we came to this spot.  Vehicles were stopped on either side, but eventually they each, one at a time, were either brave or foolish, and made a mad dash underneath that tree, including us. You can sort of see there is a big branch sticking out by the back vehicle.  That meant you had to swing onto the gravel shoulder to get past it, which just added to the hairiness of it all.  I was in the truck pulling a trailer, our market trailer, so I just gunned it and bounced about a bit when I had to swing onto the shoulder, but I just wanted to get through there as fast as I could.
This is looking back after we were safely through. 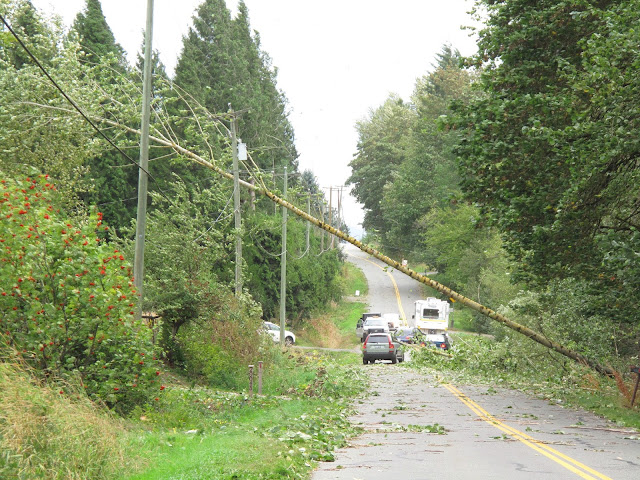 So  back at home, Larry worked at cutting some of the branches up and  I hauled them out of the way and made a big pile.  Obviously the chainsaw noise doesn't bother the chickens, or at least this one. 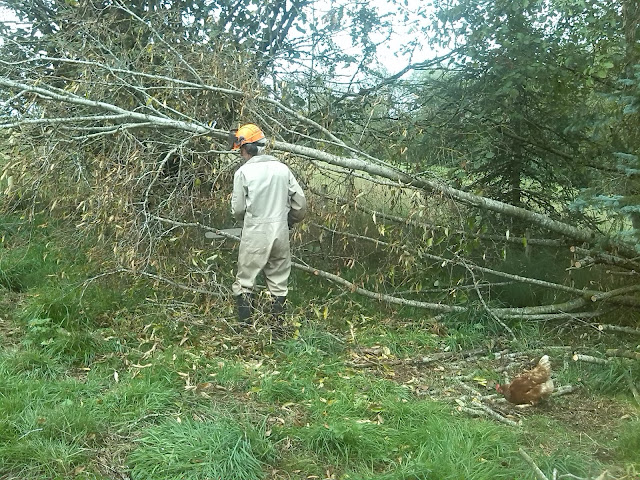 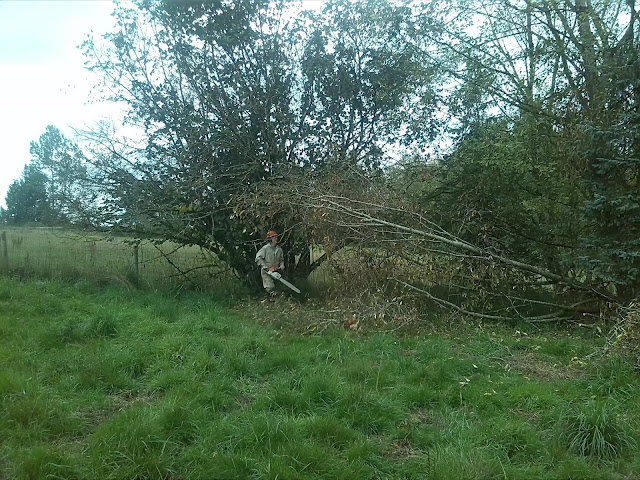 On Monday we had got the two piles of douglas fir (from my Lumberjack Window post) loaded onto the trailer and then stacked in our rinky dink woodshed.  It has been drying for months, stacked in the field.  We have had a summer like no other, hot and dry. 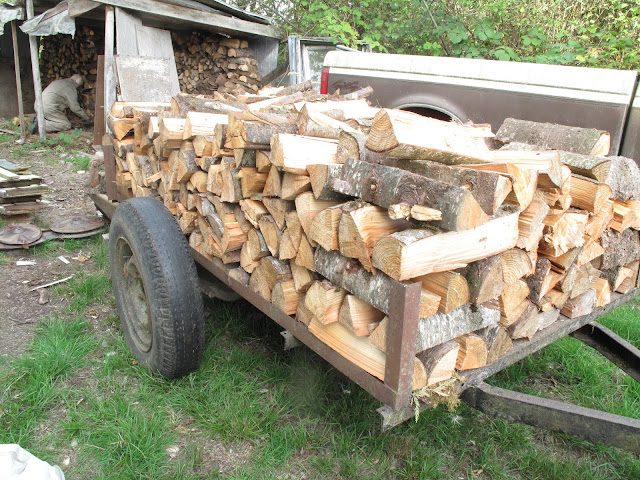 I picked up some branches from that mess and the hens had a great old time scratching where they had been. 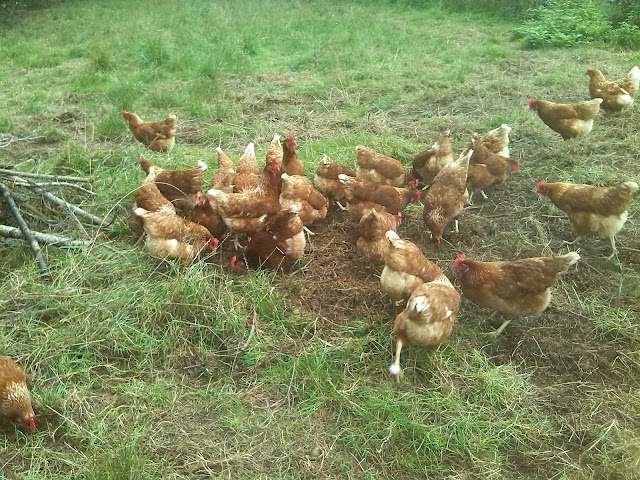 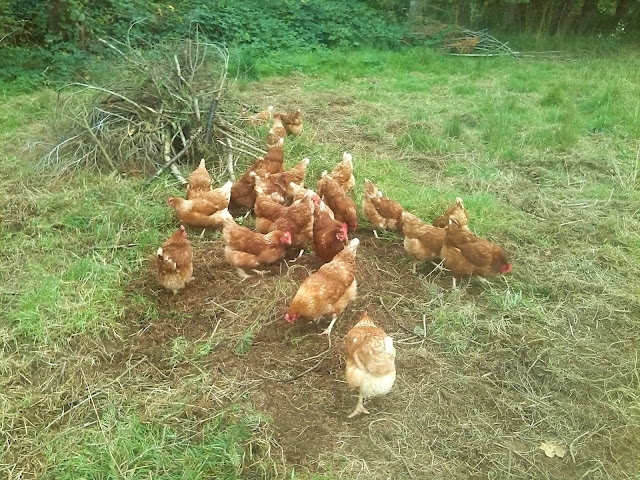 And then I went and got a camera instead of using my phone and took a few more Fall coloured pictures. 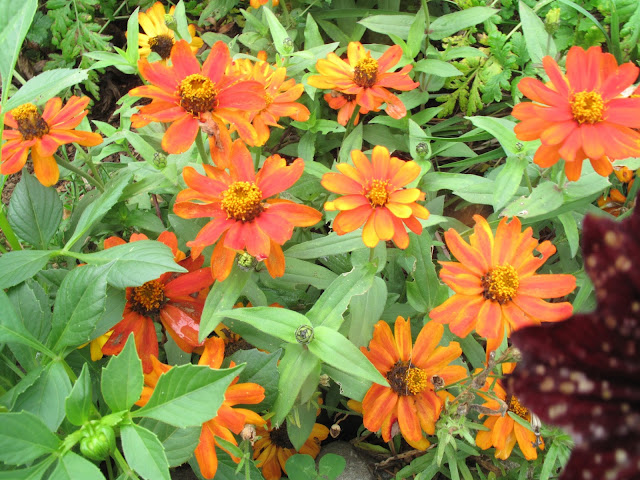 Here's some peppers that never even got planted in the ground.  They are pretty hot ones, so I might try adding them to the next batch of pepper jelly. 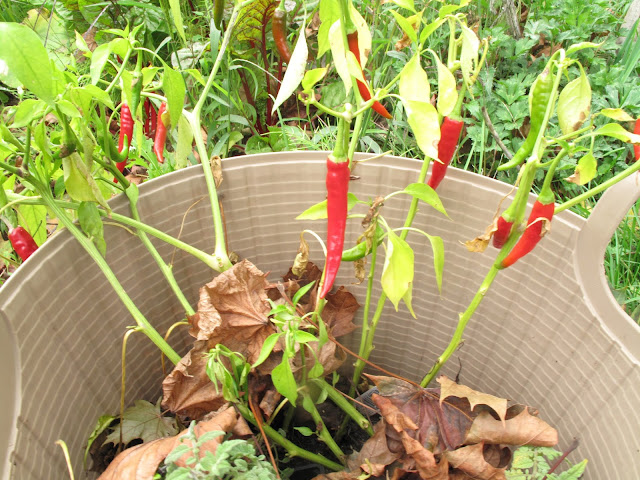 My weird squash.  I can't remember what kind I planted here in the center of the bean poles.  I ended up with two big squash, but they don't look like any of the ones I was supposed to get.  I used seeds I saved from squash we ate.  Not a good idea now that I think about it, maybe?  Maybe those squash were hybrids?  I'm just hoping the squash is edible.  Even if it isn't to us, I'm sure the chickens will be happy to have it. 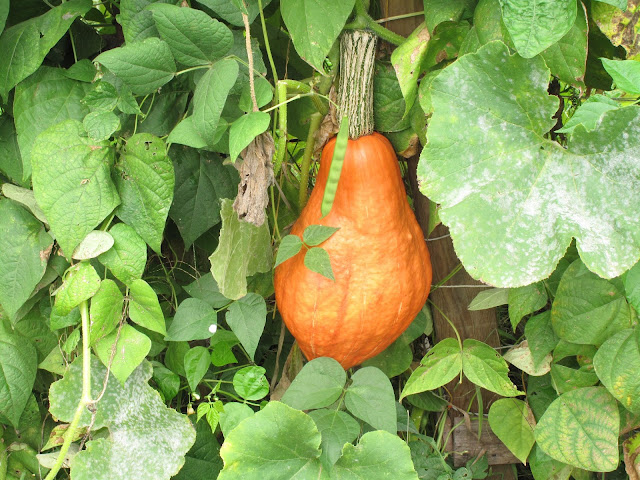 Loads of green tomatoes still in my tomato jungle.  My gawd, what a mess that is.  Working at trying to get the excess stems cut away and let some light in to the green tomatoes. 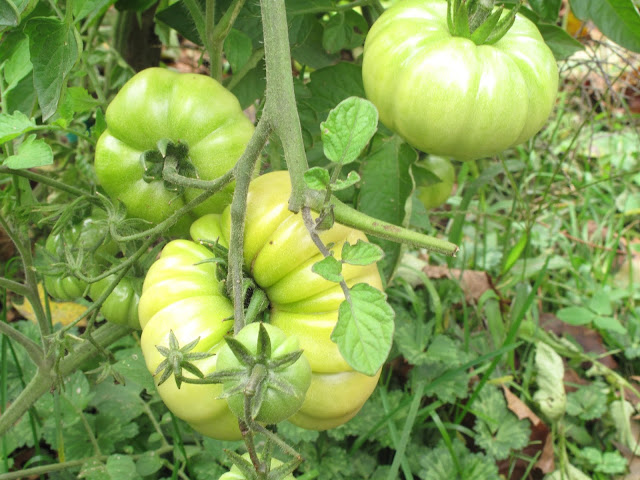 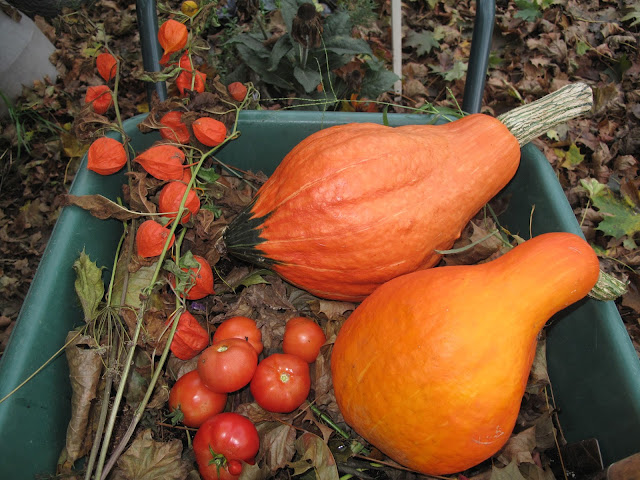 Just in case you were wondering, I have hardly touched my new camera yet.
That is going to be a winter project.

And a little bit of excitement this evening, sort of. We were walking the dogs around the block (about a mile in total).  We were almost 3/4 of the way around.  A neighbour shouted from his front door that there had just been two big bears in his neighbour's front yard, but now they had gone around the back.  He suggested we turn around and go back the way we came.  Ummm, no.  Put the dogs on leash, and kept on going.  Didn't see a thing, darn.  I wanted to see some bears, from a nice safe distance that is.  Time to carry the bear bell with us again on our bush walk in the morning.