Anyone remember that book by Janet and Allan Ahlberg?  One of my favourites to read to my kids when they were little.  I can still remember much of the wording. It always comes back to me when I'm thinking of doing a post about fruit at this time of the year.  I've got some peaches frozen, and some plums off our tree, and now it's time for pears.

Last night I was wasting time  relaxing, reading the farm and garden listings on Craigslist.  I came across a listing for pears for sale at a farm very close to us.  This is the farm where I usually buy my crabapples.  They grow organically, so the fruit isn't sprayed.  This year I messed up and didn't order enough crabapples in time.  Like all the other fruit, they were early this year, and I was trying to get hold of some people that have brought me free crabapples to the White Rock market a couple of times, to see if they were bringing me any this year.  Couldn't get a hold of them, and dilly dallied and ended up missing out on the crabapples, other than 20 lbs I had ordered 'just in case'.  Story of my life, procrastinate and then miss out on things.  Anyway, seeing their ad for pears reminded me that I had better check how many pears were on our tree, so that I could buy some if I needed to, to have enough for Ginger Pear jam for the next year.  So yesterday evening we went out and picked the pears.  I thought the crop was kind of small this year.  I'd already picked and sold 20 lbs off the tree last weekend.  The dogs had been eating pears, either picking up ones that had fallen, or picking their own off the bottom branches that were touching the ground.  So it was time to get out there and see what we really had.  We picked what we could reach and then got the ladder and I picked and passed them down to Larry.  Once we got started I realized that I totally had the wrong impression about this year's pear crop.  Wow!  They were big and most of them were not scabby, and in the end we picked 145 lbs!  The best looking crop ever I think.  Coming to a market near you (maybe) this weekend.  I tend to under charge for things I sell, but this time I saw that a grocery store was selling non organic pears for $1.49 lb, and some places even more than that.  So that's what I'm going to charge for my organic ones.  The organic people next to me at the market charge $2.99. 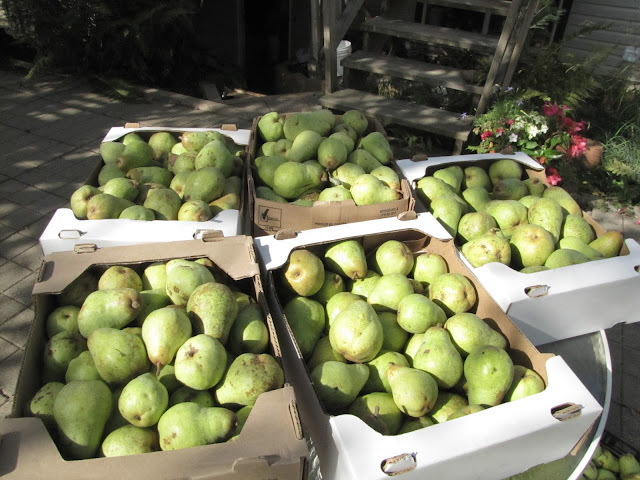 45 lbs of scabby, but still good ones 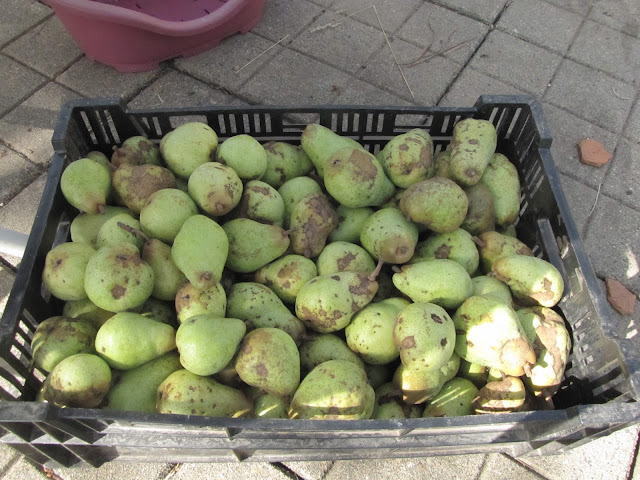 Some of them were monsters 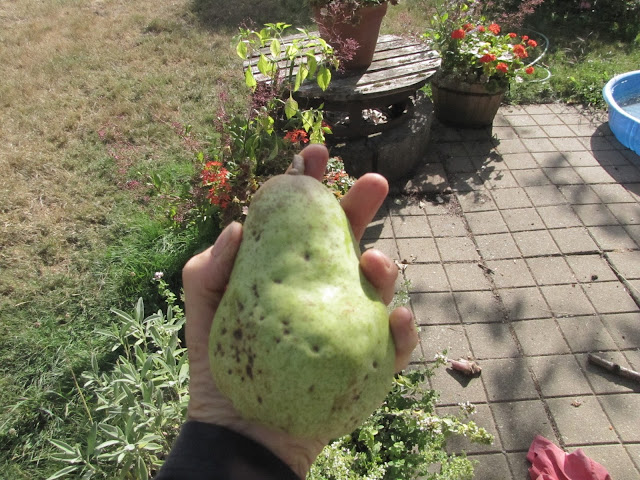 And what I can't sell, and what I don't need to freeze for jam, I just may have to can, because it would be such a waste to not use all those pears. Makes me think of my dad.  Canned pears were his favourite fruit.  Not that anything ever goes to 'waste' around here.  Chickens come running every time I go to the fence, they and the sheep would be quite happy to help me out with some over ripe pears.

We didn't put a fence around the tree this year, but I thought I'd share this video of Luna from three years ago.  It makes me smile every time I watch it:)

And because today is International Dog Day, and we so desperately need rain (which it looks like we may get this weekend and early next week), here's another cute little video.  You can pretend that is Jake and Luna:)