When we were in Ontario, our first touristy outing was to head to the Canadian Museum of History, which was on the other side of Ottawa River from Parliament Hill, in Gatineau, Quebec.  Quebec is a mostly french province, so all of the signs were in french.  It was kind of exciting for me, as that was only my second time in Quebec, with the first time being in 1963 when we arrived in Canada after emigrating from England.

There was a special exhibit, about the ship the Empress of Ireland, sometimes known as the 'Canadian Titanic'.  This was all new to me, I had never heard of it, but it really piqued my interest. We came to Canada from Liverpool to Quebec City and then to Montreal, also in Quebec, where we disembarked and travelled across Canada by train.  We came to Canada on the Empress of England, a sister ship of sorts to the Empress of Ireland, owned by the same company, but not built until 1956.  Our route was the reverse of the route that the Empress of Ireland had set out on from Quebec city to Liverpool England.  On May 29, 1914, she was struck by another ship in the St. Lawrence River, in foggy dark conditions, and sank in 15 minutes,  killing 1012 passengers and crew. 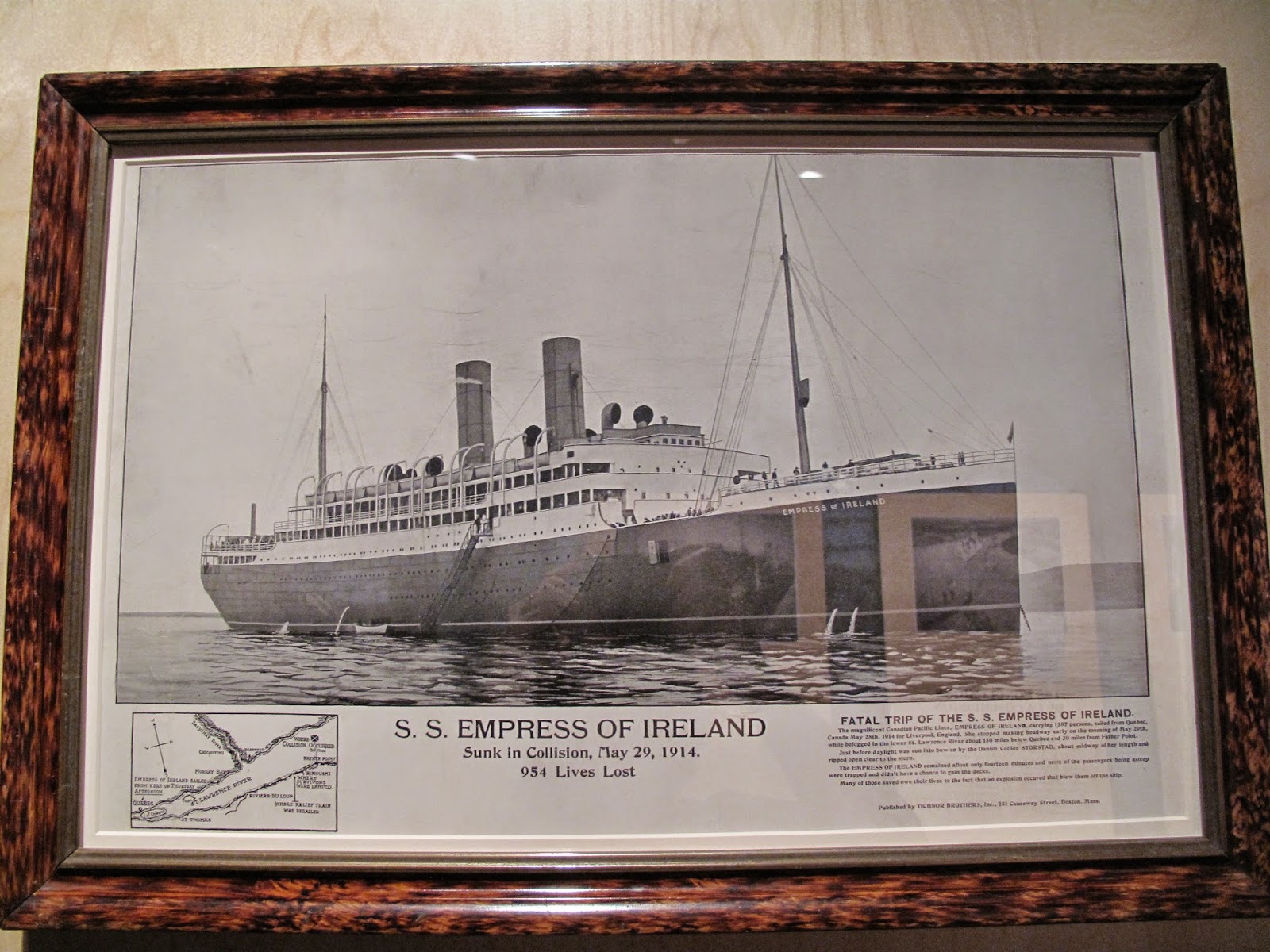 It really interested me to see the the Empress of Britain mentioned on this sign, as that was the ship my dad came to Canada on, a few months earlier than us. 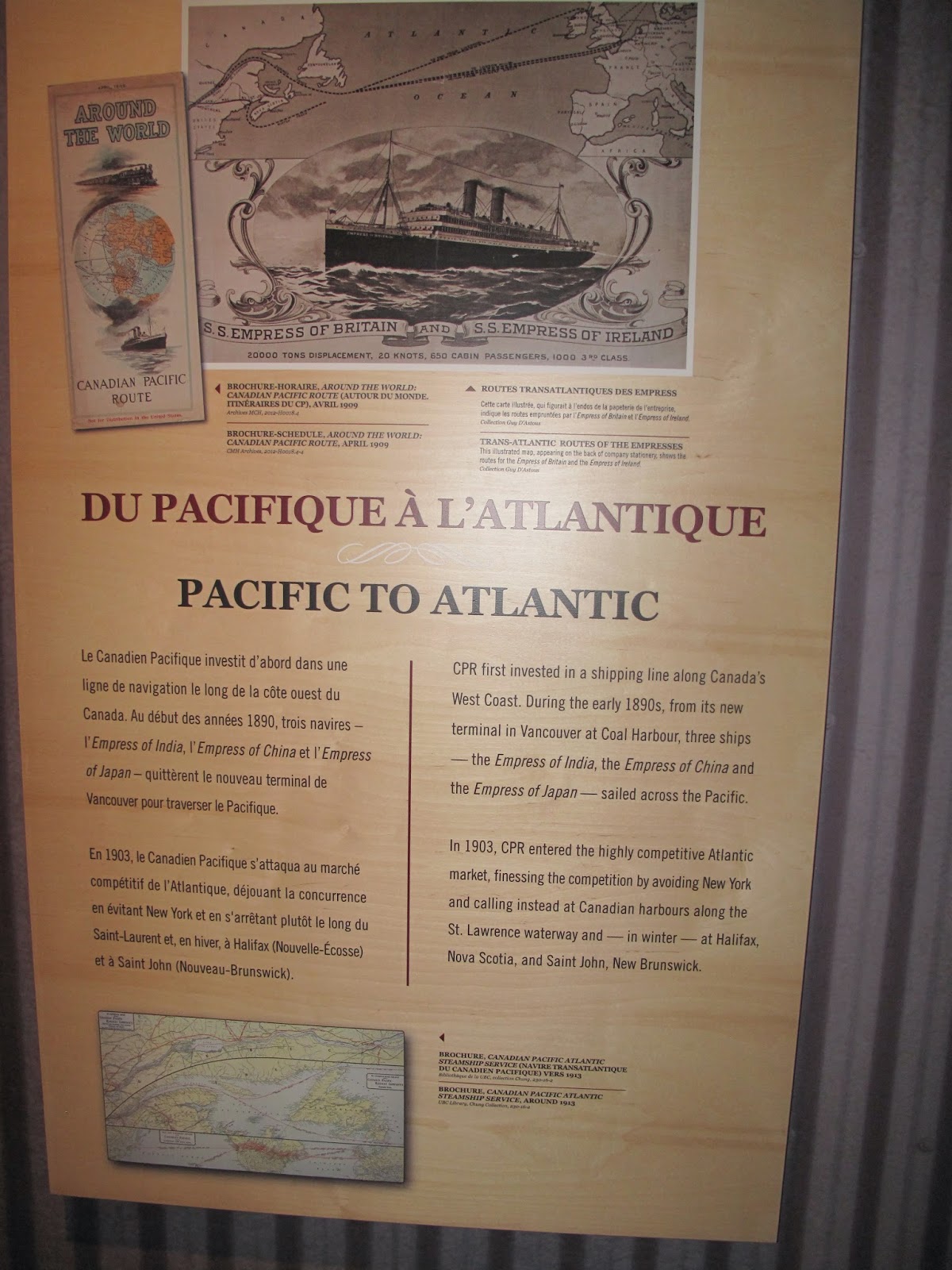 I did a bit of research and found that his ship was built about the same time as ours, and was the third ship to sail under that name, so wouldn't have been the one mentioned in that picture. 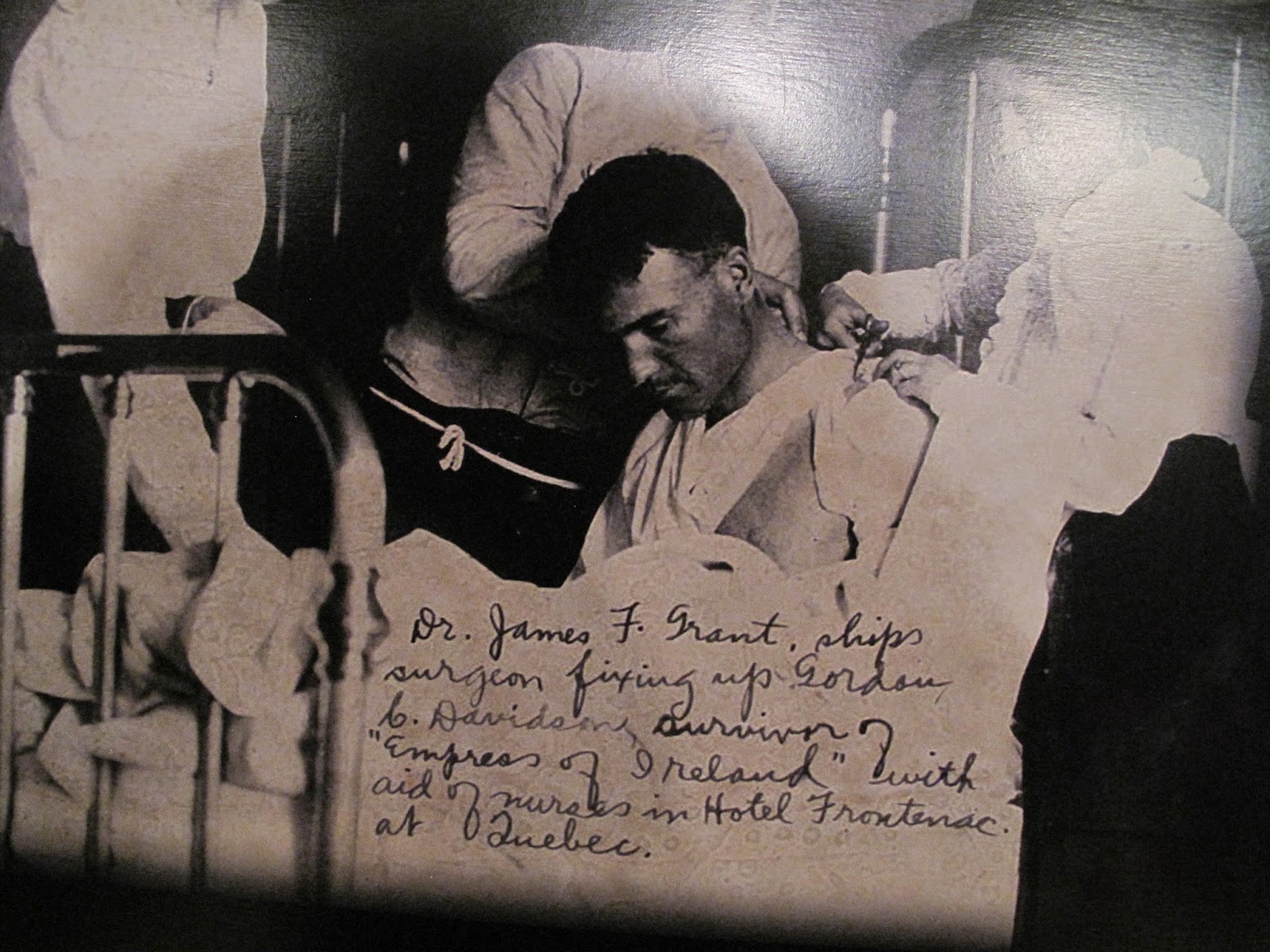 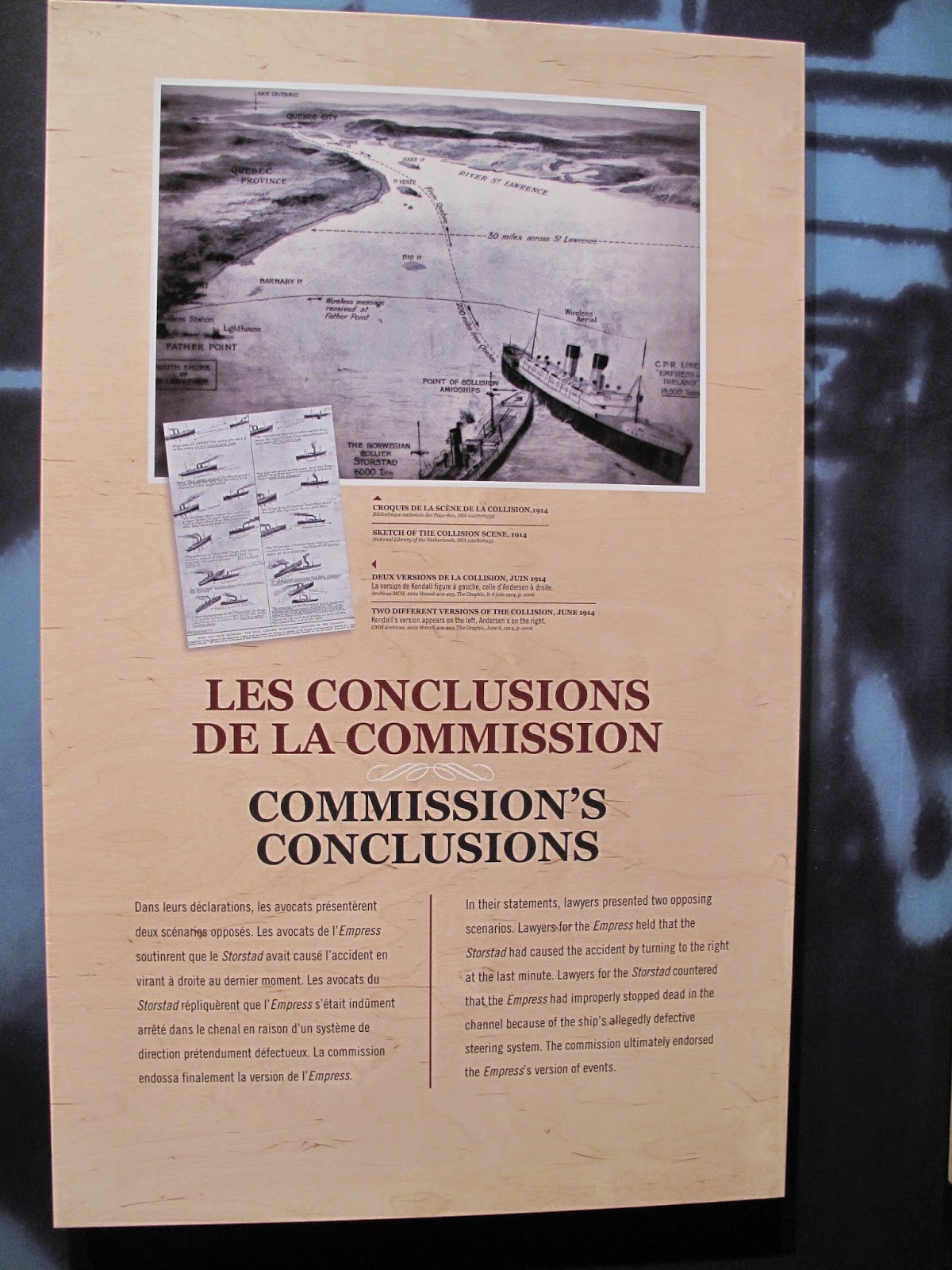 Here's the Empress of England sailing under the Jacques Cartier Bridge at Montreal on her maiden voyage in 1957.  If it had been six years later, I might have been one of those lined up at the rail:) 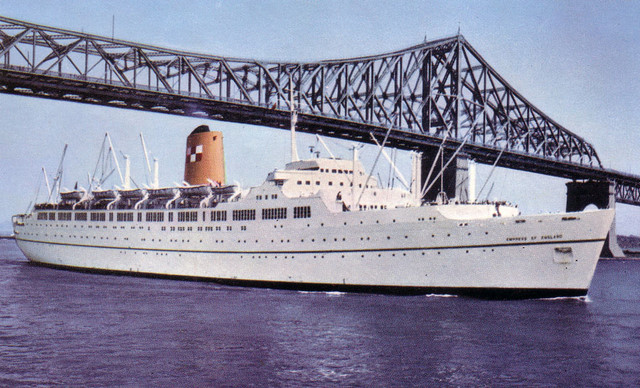 After that exhibit we went through the West Coast First Nations Exhibit, which made Meredith and I chuckle to think that we had come all the way to Ontario to see something that was native to where we lived. 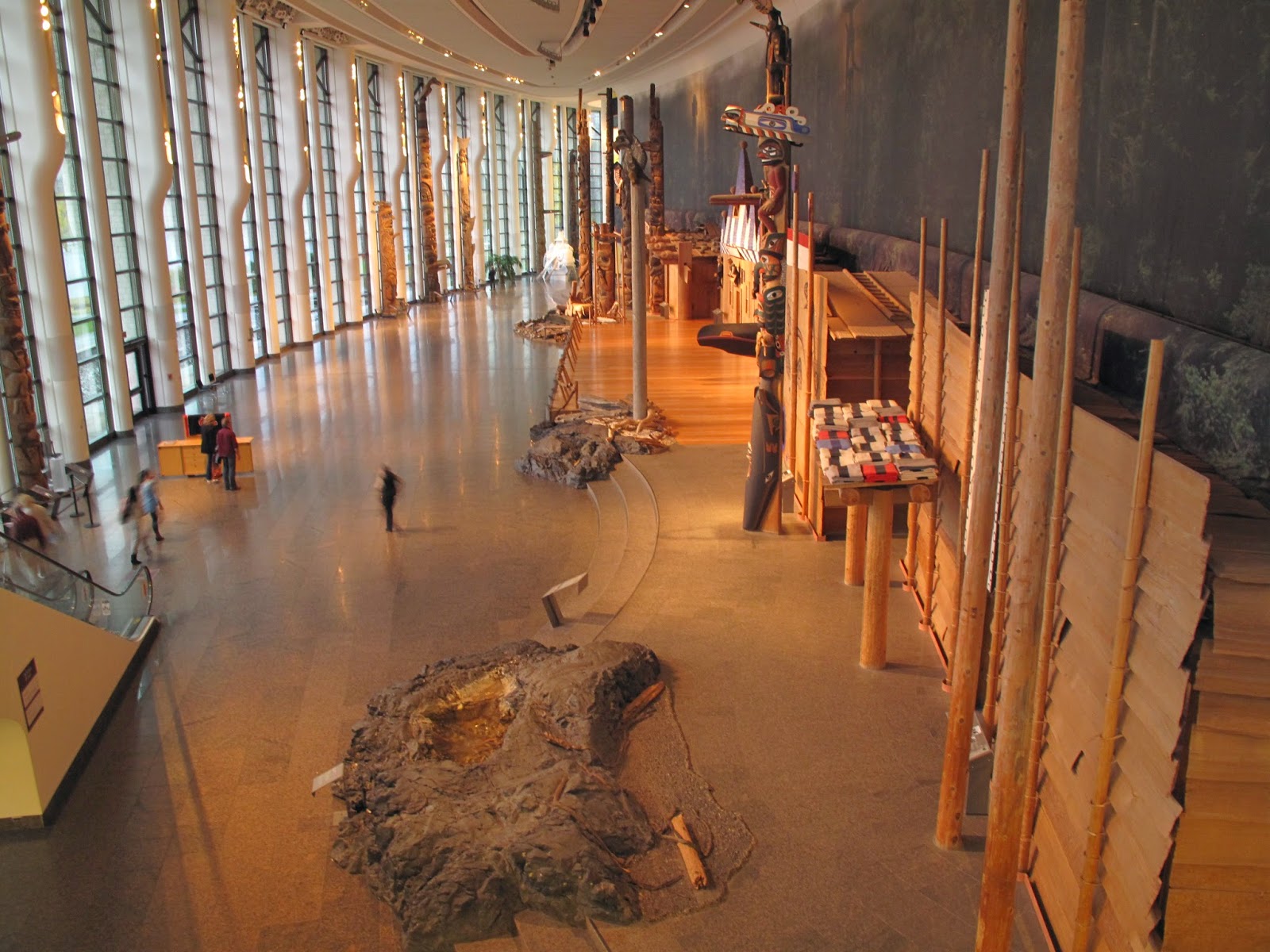 Lots of fascinating artifacts to look at, although I found the lighting very low on some of them.
Probably helps to  preserve them longer, but hard on my aging eyes at times. 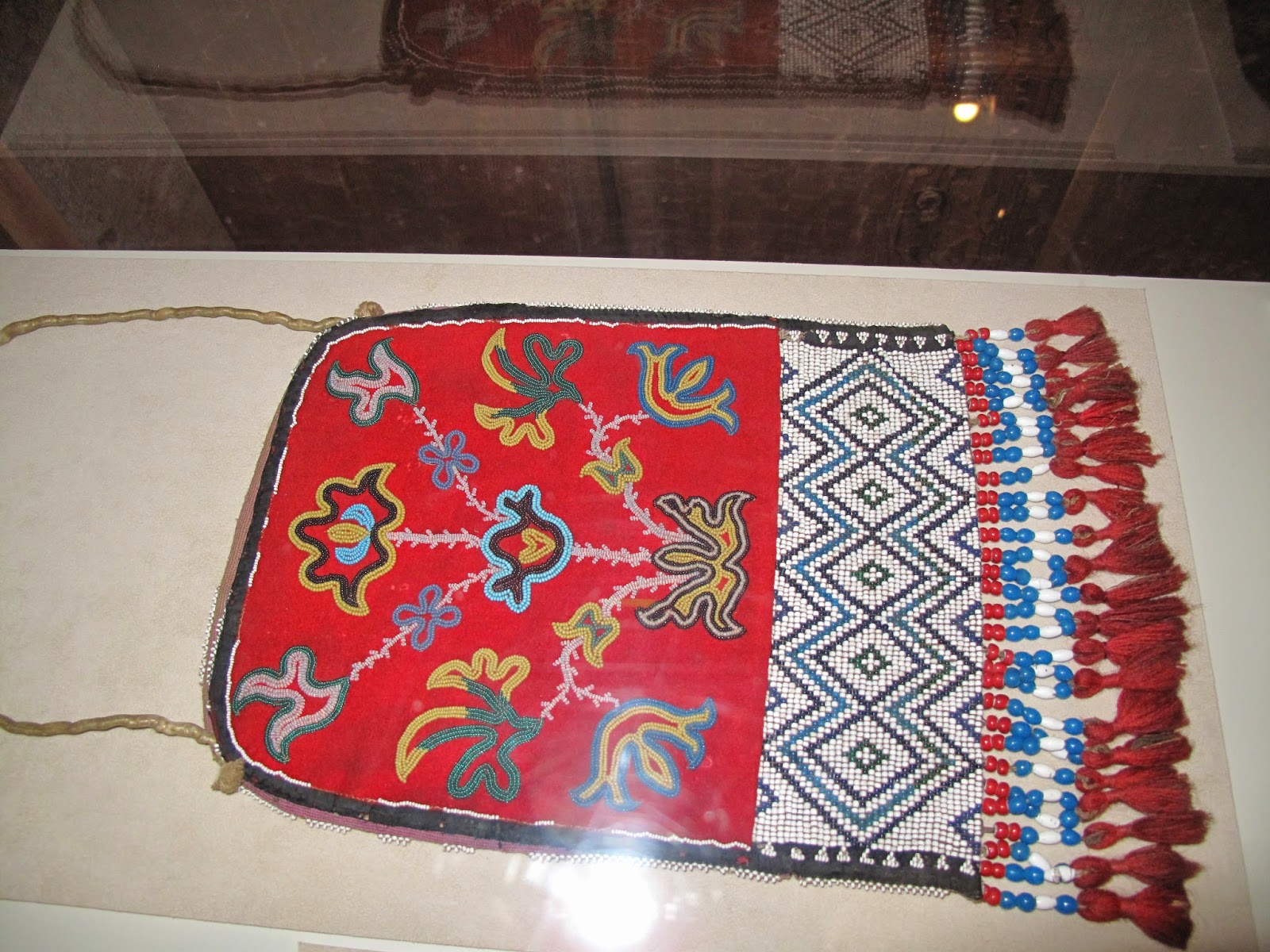 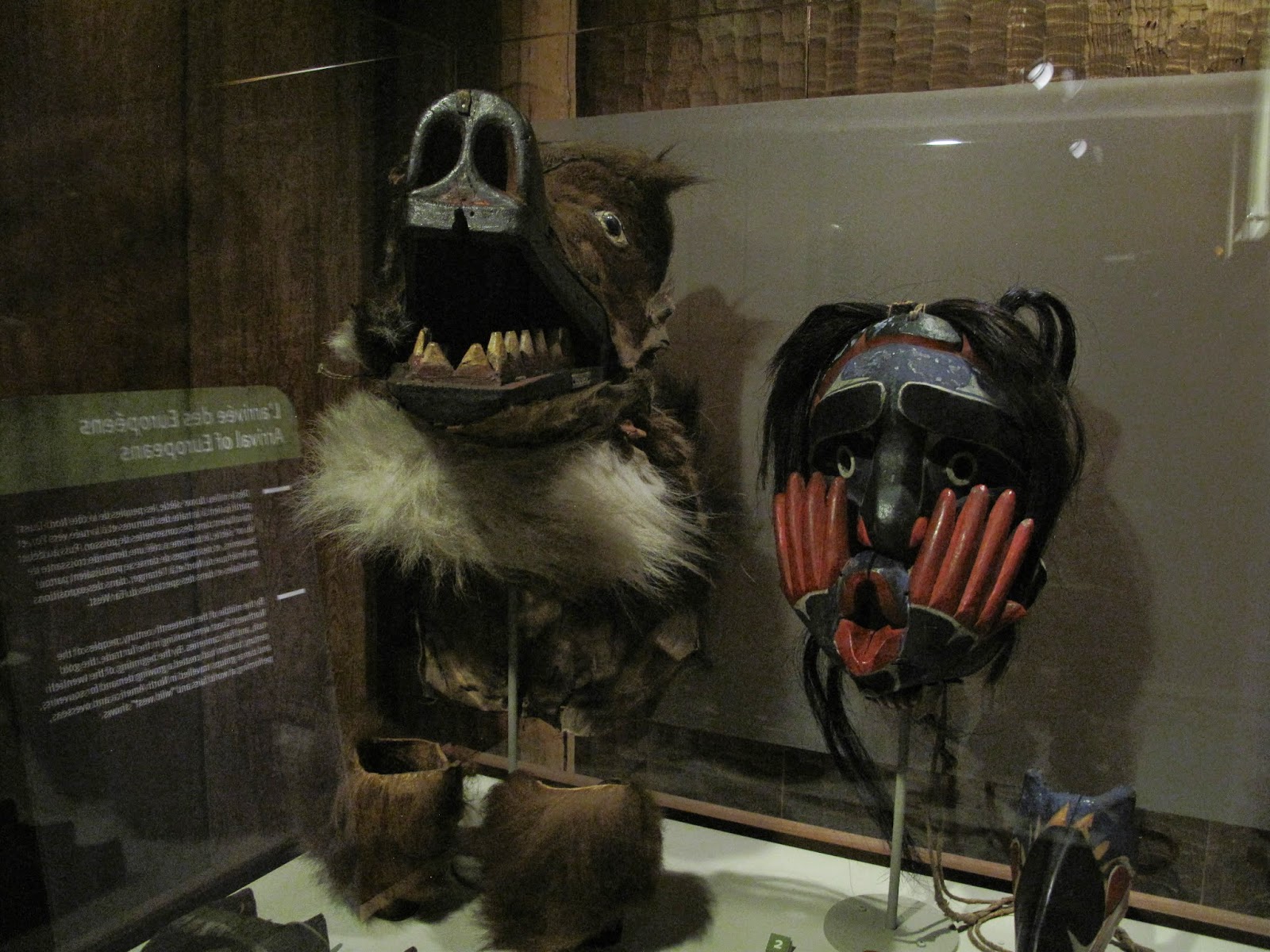 While we were at the museum we also watched a 3D movie about the wildlife of the Galapogos Islands.  We felt like we were right there!

The next week we made another attempt at the National Gallery. There was a special Jack Bush exhibition, so we headed there.  I knew nothing about Jack Bush, and was really disappointed when we walked into the first room and then the next, and the next and they were full of huge canvases of abstract painting.  Something that looks like it could have been done by an elementary school student doesn't do a thing for me.  All three of us were disappointed.  He was originally a graphic artist, illustrating magazine stories and drawing advertisements.  Those, to me, showed his true talent, but that was just a tiny part of the exhibition of his work.  So, we went through the Jack Bush display in record time.  I was dying to ask one of the security guards what they thought of it.
Here is a link to some of his work.
Art, like beauty, is in the eye of the beholder.
We did view some other Canadian Art that we enjoyed much more, and then before we knew it, it was time to head off and meet the cousins for dinner.

Three of the four cousins were able to join us, the youngest had classes that evening.  We went to a funky burger joint called The Works. 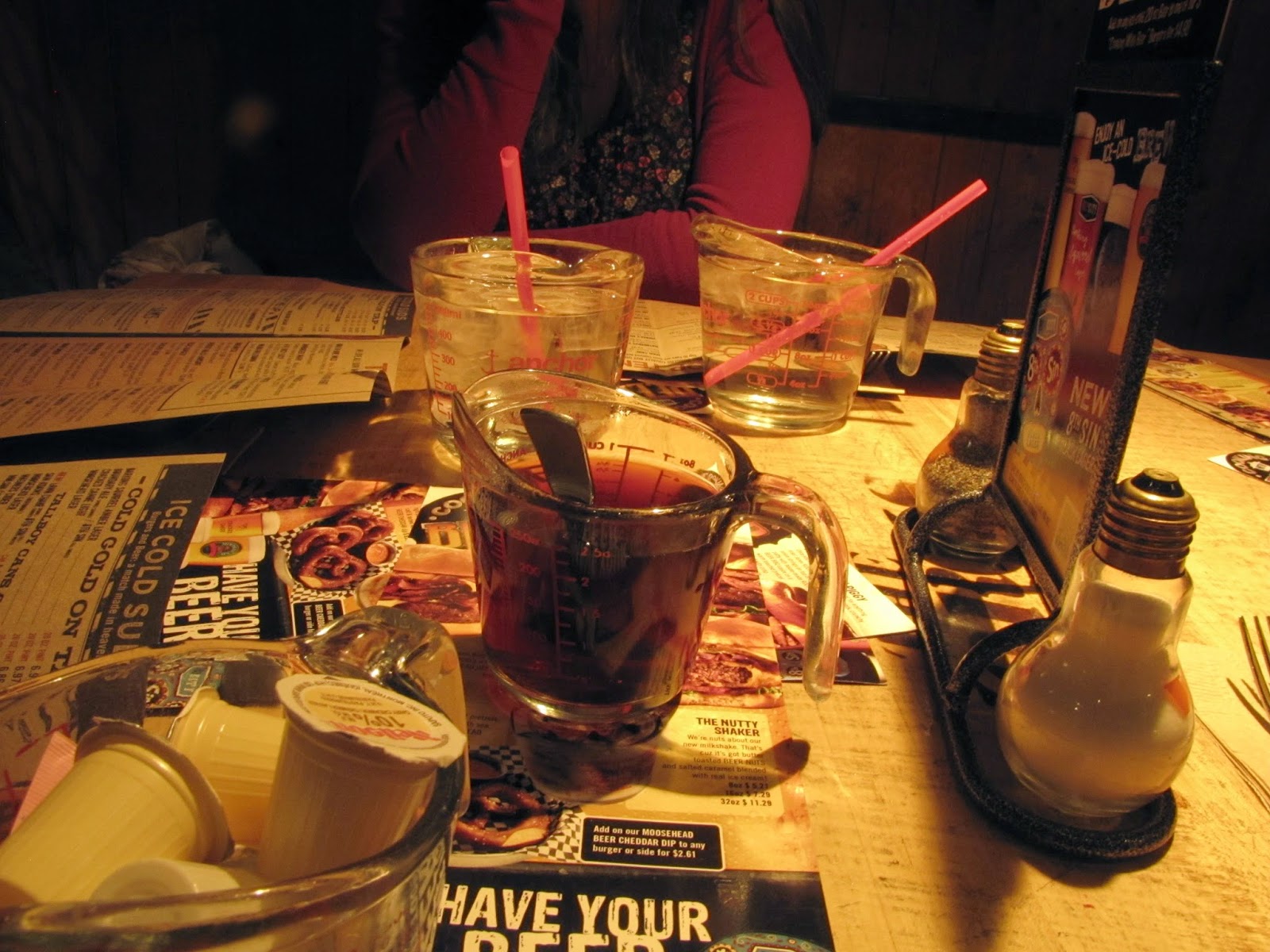 You got to pick what kind of patty you wanted (I chose ground turkey), what kind of bun, side dish, and there were numerous interesting burger choices, or you could make up your own.  I picked 'Crappy Tire', which had a round of pineapple on top, as well as some kind of cheese and tasty sauce, and it even said I could pay for it with Canadian Tire money:) 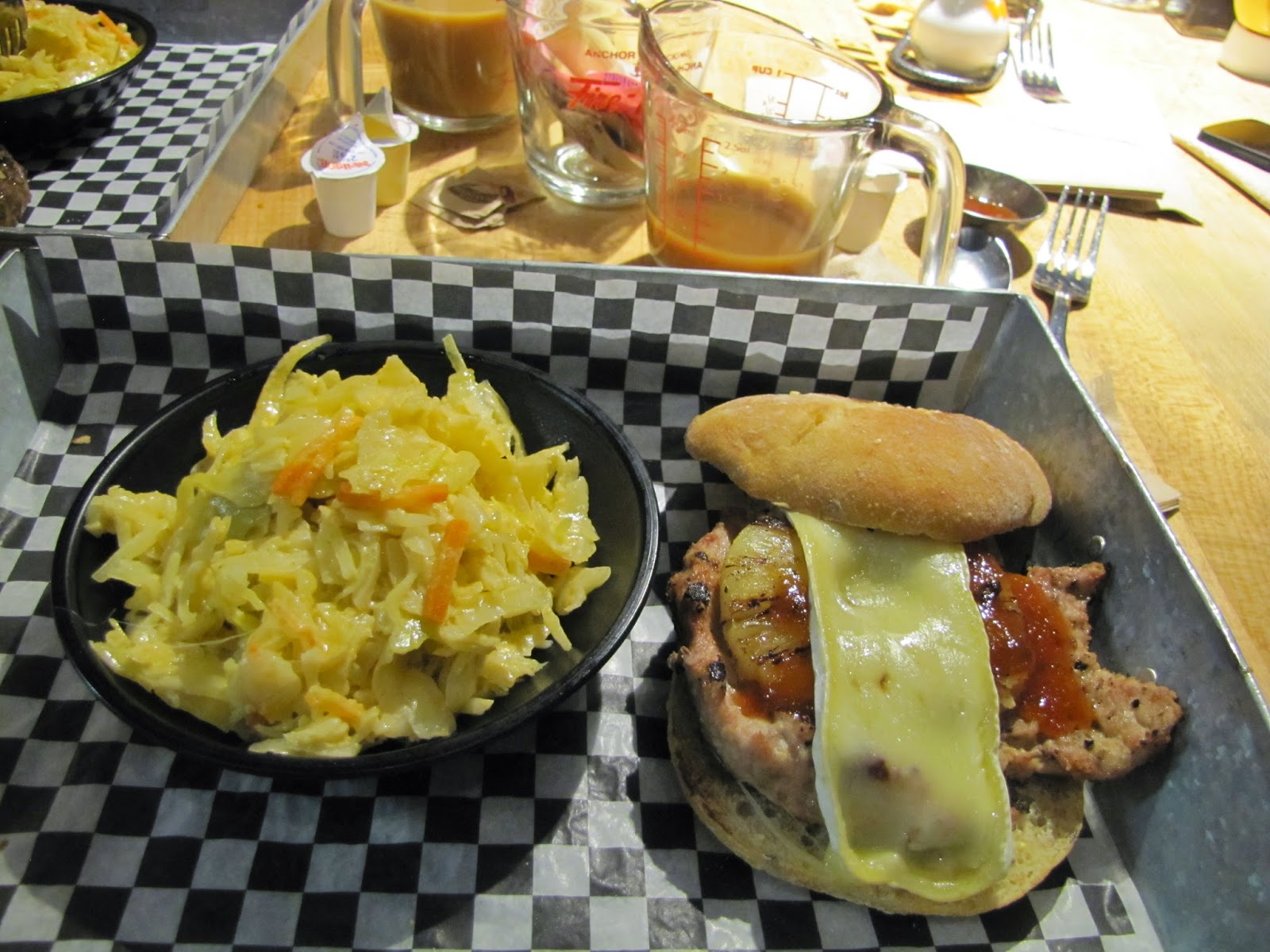 Meredith picked one that had caramelized onions, half a pear and some brie.  We both thought our burgers were excellent.  I got a kick out of the beverages all being served in measuring cups, and the meals were brought in cake tins.
A good time was had by all. 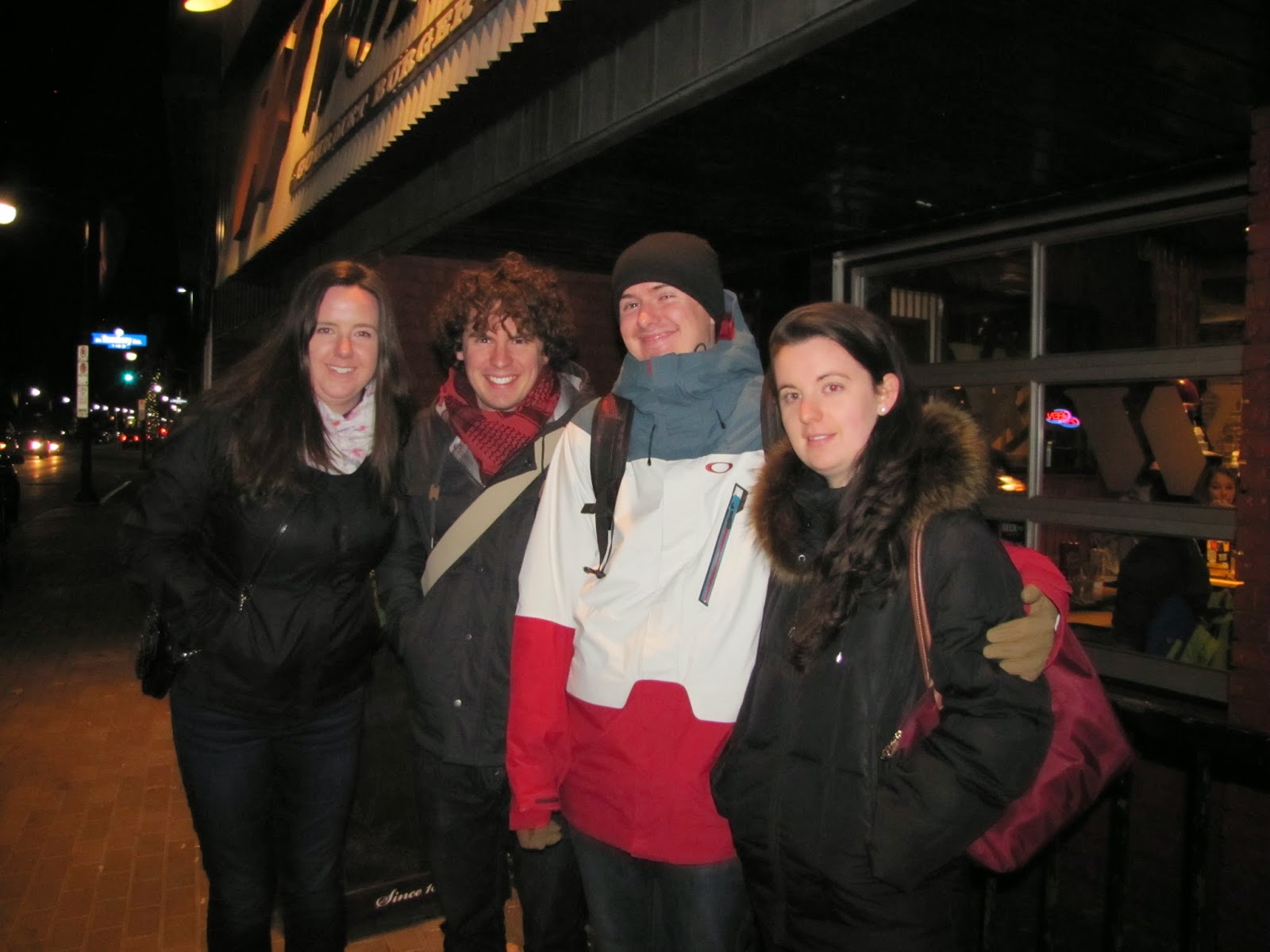 The next day we flew home.