Last week we drove to Oliver mid-week, and then on Friday we left from there early in the morning and drove across the rest of the province and into Alberta.  We were going to visit some relatives that moved there a couple of years ago, to retire, sort of.  They went the opposite way of most retirees, leaving a little town with mild temperatures right on the ocean, to the cold winters and flat land of Alberta.

We new it was going to be a long drive, so we left Oliver just after 8 in the morning.  It was a beautiful day.  It was summer in southern B.C.  We were in shorts, t-shirts and I was wearing sandals.  We drove in two hour shifts, switching drivers at that point, and usually finding a rest stop close to the two hour mark.  We'd get out, and take the dogs and ourselves for a little walk and a potty break.  There was only a slight hitch.  The day before the handle on the truck tailgate broke.  Something must have seized up inside and the handle snapped on one side as Larry was yanking on it.  There was no way to get the tailgate open.  Calli, who was riding in the canopy in a crate, had to be hauled in and out over the tailgate every time.  Definitely awkward.

About 25 minutes from Oliver, we stopped at the lookout on Anarchist Mountain, looking west over Osoyoos, which is 15 minutes south of Oliver 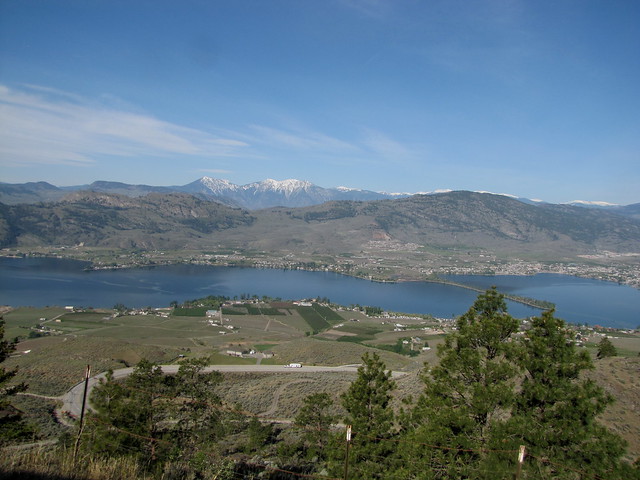 Looking to the south.  The Canada/US border crosses about halfway along that stretch of the lake. 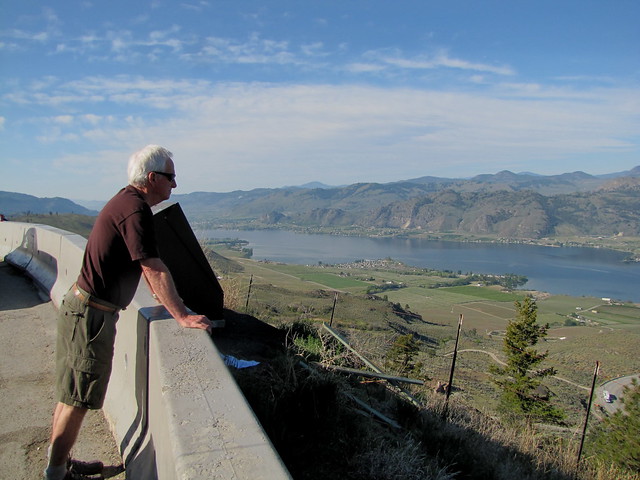 Looking north.  Oliver would be somewhere between the two mountain ranges in the center of the picture.  Osoyoos as well as Oliver are the northern tip of the Sonoran Desert than extends into Mexico. 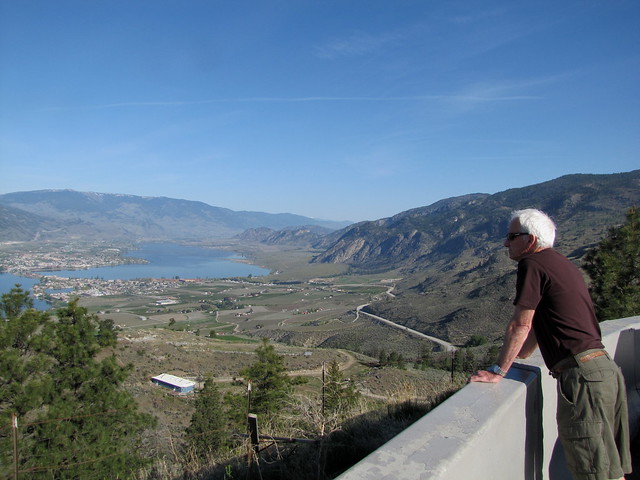 It was so warm at our lunchtime stop that we perched on the end of the picnic table bench in the tiny bit of shade there. 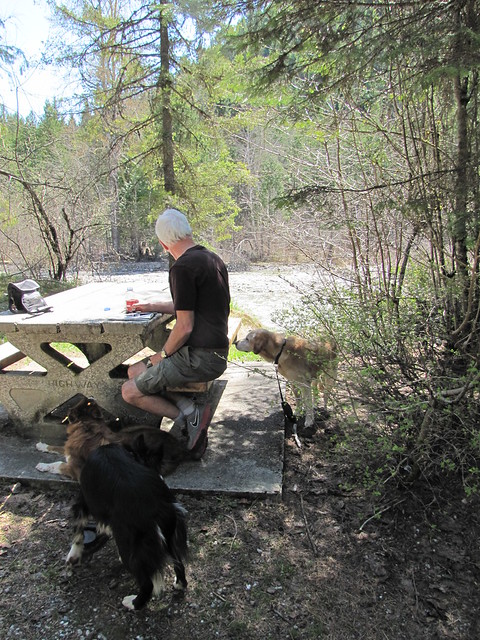 We went over numerous mountain passes.  Oliver has an elevation of just under 300m, and is just slightly higher than Osoyoos, which was probably the lowest part of our trip.  Kootenay Pass was the highest at 1774 m (5820 ft).  Still lots of snow up there. 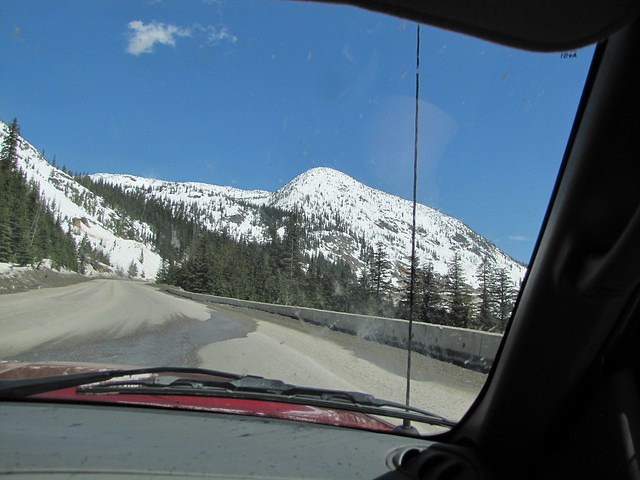 Those are dirty piles of snow beside the road. 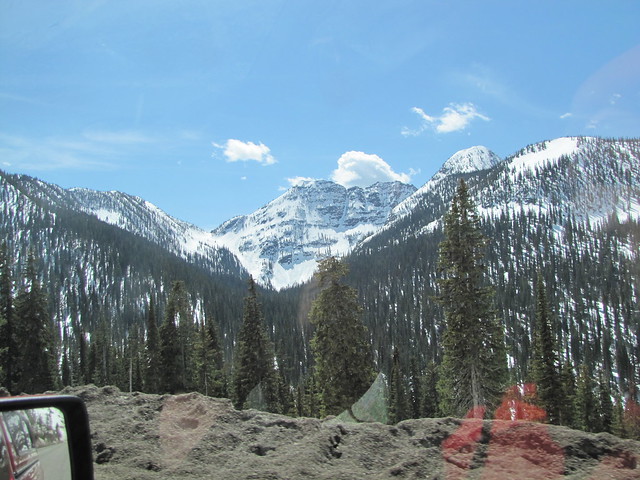 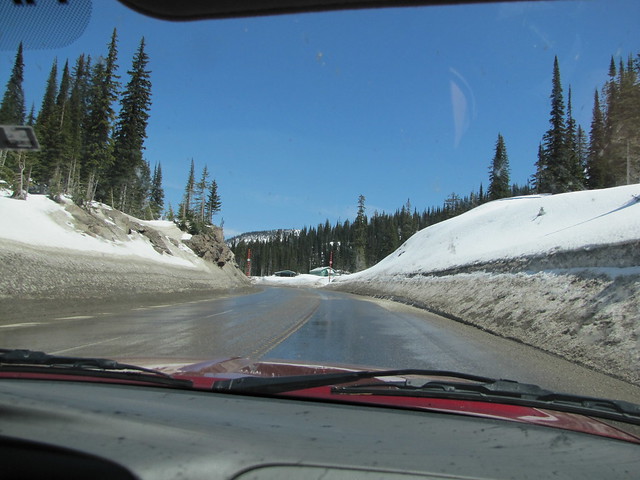 The start of the Rockies.  I was driving at this point, and this was the view out of my window.  I was trying to get Larry to take a photo, but then quickly pulled over, snapped a few myself, and then whipped back onto the highway before the semi-trailer that was behind us could pass.  He was probably cursing me for the second time, as not long before I had pulled out of a rest stop in front of him.  It's all about not getting stuck behind a slow vehicle:) 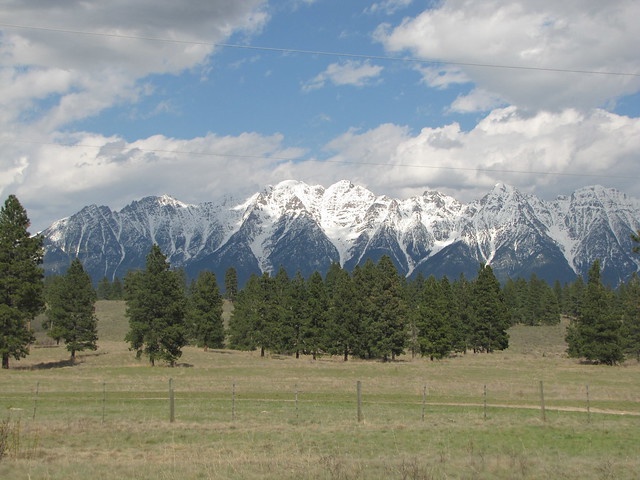 Not long after we turned from going south east, to heading north east.  Between a couple of mountain peaks we could see dark clouds boiling up.  As soon as we passed into Alberta the weather changed.  Cold, dark, clouds on the ground, and rain.  Ugly.  We had to stop for gas (about 8 cents cheaper in Alberta) and I pulled my winter clothes out of the back of the truck and climbed into them quickly. Brrrrr! 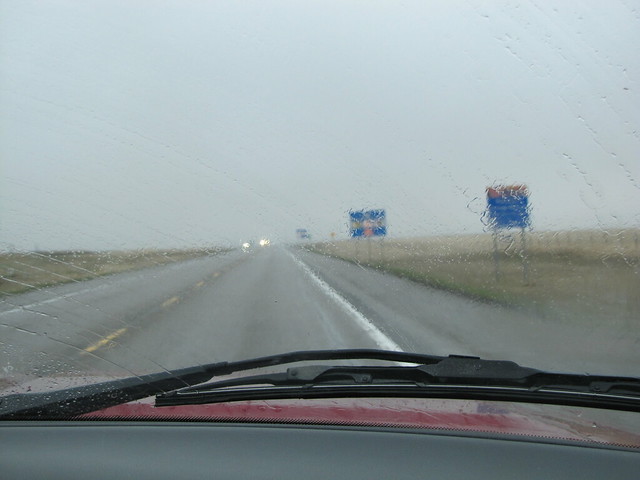 We turned off on a side road further along, stopped and fed the dogs, and Larry stood behind the truck, white knees knocking as he shed his shorts and climbed into his jeans.  We planned on stopping in Fort McLeod for something for supper.  We were so focused on getting there that we didn't notice that the turn off we needed to take to head north was just west of town.   Our map, yes, we still use maps, made it look like the turn off was in town.  We drove down a one way street and turned onto what we thought was another one way street going the other way, and then found out it was a two way street when another truck was coming right at us in the left lane. We stopped and got something to eat and then headed out of town and took the only road we saw, but just had this feeling that we might not be on the right road.  We drove miles without a highway sign appearing to confirm where we were.  Eventually we figured out that we were heading east instead of north, and then struggled to find somewhere to turn off the freeway so we could head back the other direction.  We figured we drove an extra hour, which was NOT what we wanted to do at the end of a long day of driving.  I blamed it on the weather, if we had been able to see the sun, we would have known which direction we were heading:)   Eventually we got there, about 12 1/2 hours after starting out.
Earlier in the week I had checked the weather forecast.  14 C (57 F) sun and cloud.  I figured that was good.  We were going to kennel the dogs in the truck, as the people we were visiting are not dog people.  I thought we would be able to sit outside in the sun, and the dogs could be out on the grass.  We took the x-pen along.  Imagine my horror to see the forecast change on Tuesday to just above freezing and snow for the weekend.   In the end we drove the truck into the garage, and that at least made it a few degrees warmer for the dogs.  Not their choice on how to spend a holiday, but they did okay and it was only for two days.

Saturday morning we woke up to this.  I suppose it was better than rain, but the novelty wore off pretty fast.

The dogs thought it was fun though. 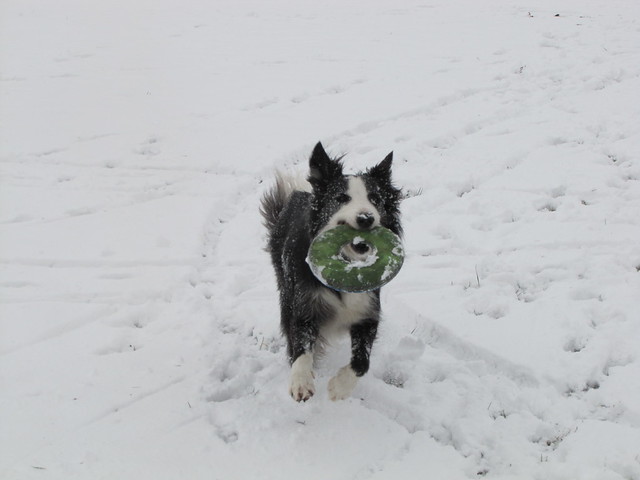 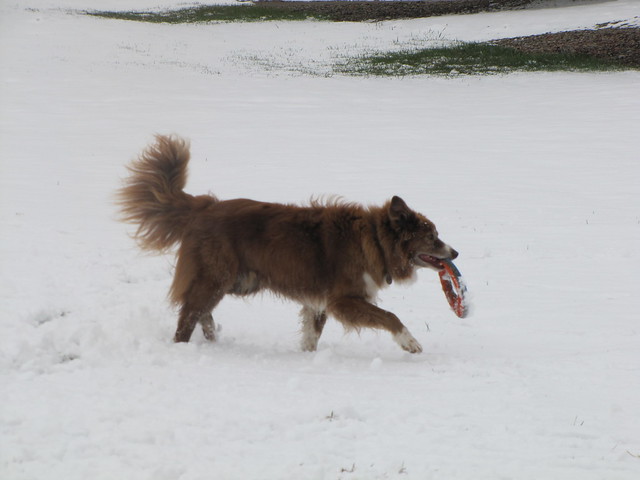 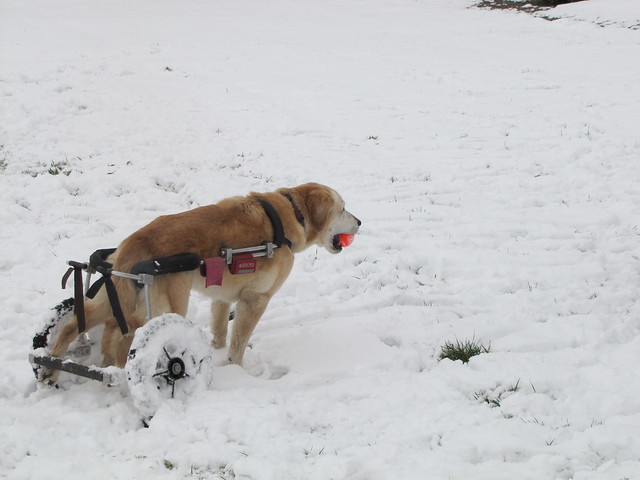 We had a spectator 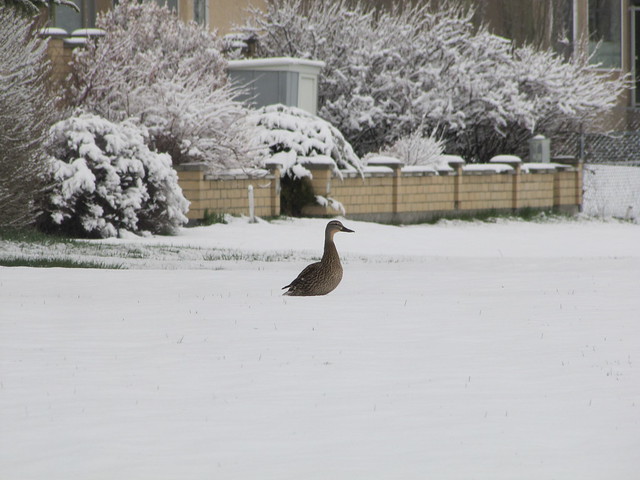 I didn't think it was much fun when I was stood at the dog off-leash that afternoon, snow blowing sideways into me, throwing frisbees for the dogs, and wondering why I was in this place with it's crazy weather.