I've been looking for a food processor for quite a while.  The blade on the one I have now keeps getting jammed on the support post, and after I have been using it, the blade is jammed on so tight I have to fight to get it off so I can lift the plastic bowl thingy off the motor base.  Did that make sense?

At one time every garage sale seemed to have a food processor.  Not that there have been any garage sales to go to yet this year.  I've been checking the thrift stores, but have had no luck.  I thought I had found one once, and when I went to plug it in to make sure it worked, it didn't:(  I was most disappointed, since everything is usually checked to make sure it is working correctly.

In January when we were in Oliver, we finally got around to checking out the Kinsmen's People's Market.  I guess they decided to name it after the beings that were coming to buy things, and not the beings that might be hidden in some of the furniture.  There is a flea market across the street as well.  The KPM is like a giant garage sale/thrift store.  Some things are priced better than others, but I thought I got a real deal with this food processor for $3.   It's an older Sunbeam, weighs a ton, and works well.  I don't really use a food processor much, but when you need one, well you need one.  Some things just can't be done with a blender.  Mostly I use it for pureeing the red peppers for red pepper jelly.  Just recently though I've started making my own hummous.  I've got tired of paying store prices and buying hummous with unnecessary, why do they have to be there, and what are they, ingredients.  The food processor does a great job on the hummous.

When I bought the food processor, it only came with the metal blade.  No big deal, I don't have a lot of use for the other blades, although have used them occasionally. Yesterday was a miserable wet day, I couldn't seem to get myself working on anything useful, so I decided to go wander around a couple of thrift stores.   Guess what I found!   A cardboard box that had food processor parts in it.  And it just so happened to be the same model of food processor that I had bought.  So for $5.50 I got an extra plastic bowl and top, three food pusher tube things,  another steel blade, as well as a plastic blade.  There is also a tray that holds a bunch of different blades that fit on the white and clear umbrella shaped things (why can't I think of the right names for these things?).  So there is a grater, a french fry cutter, and four blades that will slice different thickness.  Looks like there are three blades missing (can't expect it to work out absolutely perfectly!).  Made my day though, to find this. Here's an original water colour I picked up a couple of weeks ago.  I have a soft spot for water colours.  It's about 20 x 24".  It came in a good gold metal frame, and looked fine in that.  But....the picture I decided to replace with this one, had this wood frame around it.  It was the same size, and the style of the frame just seemed to go better with the water colour than the metal frame, so we switched them around.   The picture was on sale for $8.75. Now for what attracted me to this picture.....well it made me think of where my dad grew up.  He lived on Waterside, a street that ran alongside the River Nidd in Knaresborough England.  There is a train bridge over the river which the painting made me think of, sort of...

When I looked further, I found this photo of the Low Bridge over the River Nidd in Knaresborough.  Inspiration for the painting maybe?:) 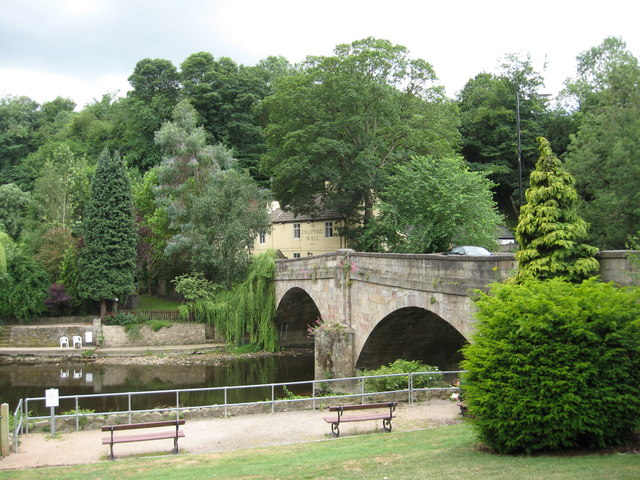